The mod features a great deal of gameplay features and it will include several factions and other elements from the Star Wars universe, both expanded and the new canon universe. The mod also features elements from previous Age of Empires games, two great examples are the fourth resource and the AoK style techtree. Since it’s a total conversion, the civilizations from the original game have been deactivated, but units and buildings for them are still available in the editor. Civilizations are renamed “Factions” and are given new traits. The concept of unique units and unique techs are gone, while the concept of things such as unit classes are introduced. Naval unit roasters have been scrapped, in favor of aerial unit roasters that act less like naval units and more like regular units instead, ages are reformed into technology levels, a new hero (or villain, depending on your faction) feature is also present on the game. Many other features are present, in order to transform the great game that is Age of Empires III into a platform to the star wars universe.

The factions in AoEIII: GC are divided by their gameplay style. There are four main Gameplay styles in which a faction can fall into, these are:

More information will be disclosed about the gameplay styles and their factions soon.

Random maps that feature the locations of the star wars galaxy are also in the work, with new terrains, and ambient props to be used.

Every faction will feature at least one learn to play scenario.

Two campaigns are being planned, although planning does not mean they are confirmed, if they make it onto the game, they will feature a Light Side Campaign and a Dark Side Campaign, and follow the events from episode I to the 30 year time gap between the episode VI and episode VII.

More information will be out soon. Right now feel free to comment and take a look into the screenshots.

May the Force be with you!

Thanks for voting and helping Galactic Conflict on it's quest to become the 2021 Mod of the Year. You are now in with a chance to score some free games from our #modlove collection. Help this mod secure more votes by embedding the widget (or link) we have included below on your favorite sites. 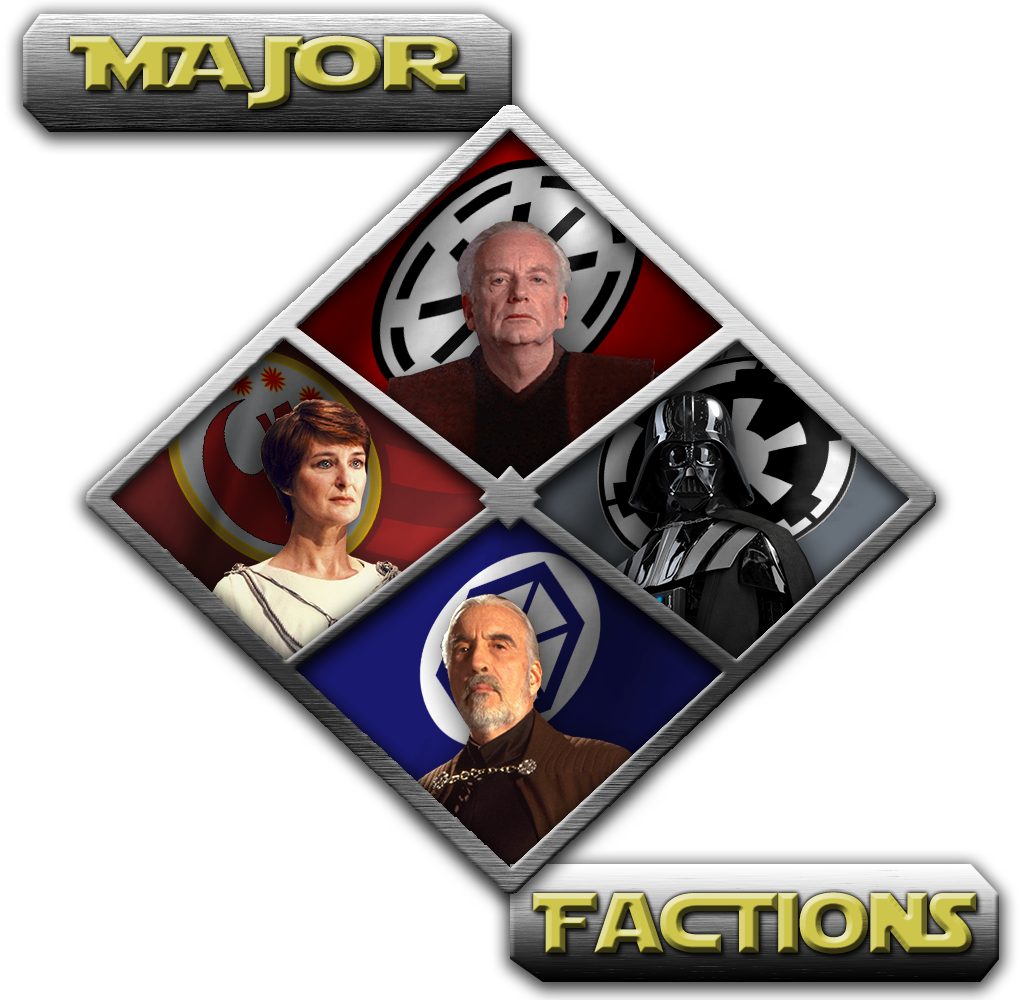 Throughout the history of the galaxy, star systems united themselves in order to become more powerful, these unions came in different forms, from simple alliances to wide governments that could cover entire regions of the galaxy. These unions became so powerful, that they were regarded as major powers. The most notorious powers in the galactic history were the Galactic Republic and the Confederacy of Independent Systems during the Clone Wars, and the Galactic Empire and the Allianceto Restore the Republic during the Galactic Civil War.

In Age of Empires III: Galactic Conflict, these are called Major Factions, and represent the four main factions that played a big role on the galactic history. Because they are so different from other factions, they have their own gameplay and playstyle. In this article we will analyze their aspects. There are four present Major Factions: The democratic Galactic Republic, the separatist Confederacy, the tyrant Galactic Empire and the resistance-movement Rebel Alliance.

In contrast with the other factions, the Major Faction’s lack any big and game-changer bonuses, making them more balanced to play with without messing the gameplay. Another characteristic of the Major Factions is that they also lack a proper counter-system, apart from the aerial unit-roster, they may have the widest unit roster of all factions however each unit is their special unit with their own distinctive purposes.

But perhaps the most distinctive feature of the Major Factions, as said above, they have the widest unit-rosters in comparison with any other faction, but it is important to note that their unit-roster is not fixed. That’s right, the unit roster is chosen by the player himself:

Major Factions advance their tech levels with important personalities of their proper faction. Each personality has a minor bonus that adds to the gameplay, these bonuses are made small in order to make the gameplay fair. At the same time, personalities may also send shipments of units or resources.

Having withstand their Sith and Mandalorian foes, the Republic enjoyed a thousand years of peace as the galaxy’s predominant government, but now that the peace was broken, the Republic was forced to create the Grand Army of the Republic in order to protect its citizens throughout the Galaxy.

Born from the distrust on the ways of the Republic, the Confederacy aims to topple the corrupt galactic government. With the Separatist Droid Army provided by several mega-corporations, and the support of many star-systems, the Confederacy is a force to be reckoned with.

From the ashes of the Old Republic, the New Order arises. After spending years developing its military, the Empire began to conquer countless star systems and add them to their domain. Ruled by the Emperor’s iron fist, enforced by his legions of Stormtroopers, the Empire knows no true rival to its might.

Seeking to bring democracy and freedom back to the galaxy, several resistance movements joined arms together and formed the Rebel Alliance. Made up of brave fighters from all across the Galaxy, the Rebellion has pledged to fight for the freedom of every single being of the Galaxy against any governments or organization that failed to do the same.

I plan to create more articles, explaining each one of these factions with more precision, this article is meant for the gameplay style of this faction type only. Remember, everything in this article is subject to changes, as it is still in development.

The ingame history that is given to the Galactic Empire.

A quick summary of the revamped Age system from the vanilla game, followed by a review of the year of 2016.

How did i miss this mod??? Im following it right now :)

any prediction if this mod goes to the definition edition?

Hello there! Is there any discord channel we can follow you? Nice work man!

I heard you were looking for a playtester

I just discovered this mod ... it's too much, too much happiness !! please finish this masterpiece, don't abandon it! good luck!