The time has come to officially show off my work on Frontier. I now invite you all to take a tour of The Frontier and behold it in all its beauty and detail. I also invite you to take part in the mod's continued development by commenting on it and suggesting features and improvements. 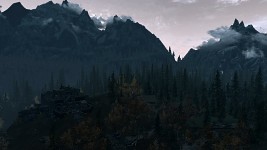 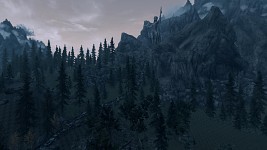 This is an Alpha release of Frontier for Skyrim. There is unfinished business all over the mod. LOD is of questionable quality in places. The landscape is largely done; interiors are in place, of which most are decorated too. There are large areas of unfinished land at the outer areas of The Frontier. There are NO NPC's, NO QUESTS. Some resources have been added already; like new buildings, some new armour, some new weapons, books and so on. There is a lot more to come!

Install manually. If you don't know how to do that, don't download the Alpha, but wait for the finished version. Cleaned with Tes5Edit. The Alphas and Betas of Frontier are only uploaded to ModDB. The final version will also be featured at the Nexus. Do NOT upload this WIP to any other site. Thank you.

To get into the Frontier open the console and write "cow Frontier -19,-17"

Another update for Frontier. We're closing in on the first beta release, people! Soon!

Again, a monthly update on what's going on with Frontier for Skyrim. The progress is steady for the most part, as long as RL doesn't interfere.

Here, you'll find the latest on Frontier's progress and what's been done during the last month.

Read more abou the steady progress of Frontier for Skyrim. The past month has been great and productive!

Fixing some problems with the Alpha release. Missing textures and such.

Try out the first Alpha version of Frontier for Skyrim. There's masses of exploration to be done!

Glad to see you're still pushing onward with this! Don't give up, keep pushing forward! I know what it's like to take body blows and feel like maybe giving up but you just gotta keep going! I'm still following your work and still looking forward to it.

Here's the development blog with the latest news: Frontierskyrim.wordpress.com

Look up extended encounters and ask him for advice, make a lot of encounters for this big landscape to keep it interesting; can't you do something like lord of the ring base, where wood elves separated from the whole skyrim and Tamerial have a small village or kingdom, and there's encounters where you see them hunting for food, quest etc, same with the nords, etc, where each Race have their own little villages or etc, one or two big kingdom, not big but like holds, wherea they live together separately, trying to live life daily competing with each other for game or something, it's too big of an idea though, ha ha for one man to do :(

Man... can you at least give us a very rough ETA? I am hoping this will come out before Luftahraan because that one won't come out ever it seems.

2.Will there be laods of new cretures or will you reuse alout of them from oblivion?

3.Are you poalnign to have any new spells or weapons?

Also just a tip when you do the side quests make them in-depth.