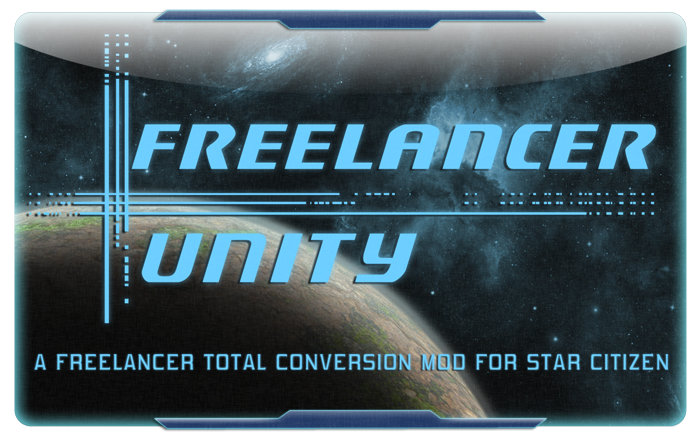 Freelancer: Unity is a total conversion mod, based on the game Freelancer by Microsoft, for Star Citizen. The Freelancer: Unity mod aims to recreate the universe, ships and lore of Freelancer, using Star Citizen’s excellent level of quality and set of features, particularly ship boarding and ship customisation. Some aspects of Star Citizen are likely to be tweaked in order to achieve more of the atmosphere found in Freelancer, most notably the weapons classes. Some of the Freelancer universe may even be tweaked to make it more compatible with the Star Citizen mechanics and to achieve better balance and game play for persistent servers. Also a priority is the creation of an entirely new story campaign set at the same time as the adventures of Edison Trent in Freelancer, however whether or not this will actually be possible will have to be addressed when Squadron 42 is released. FL: Unity is being created by the Shattered Worlds Development team whose past work on the Shattered Worlds: War Torn mod for Freelancer was known for its very high standards of quality, balance and attention to detail. Those same principles have been carried over to the development of Freelancer: Unity and make the level of polish on the mod a number one consideration. The Freelancer universe is a big one and the Shattered Worlds Development team is hoping to have anyone interested in helping the Freelancer universe find new life in a brand new engine join us over on our forum.

It may seem odd to be starting up such an ambitious modding project before the game it’s based on is released but a huge portion of the work required for Freelancer: Unity can be done without the game itself to work with. The ships, stations and other 3D assets can all be modelled prior to the release of Star Citizen, and because we know what engine Star Citizen uses (namely CryEngine 3) and a free SDK package is available for it we can theoretically test every 3D asset on a basic level in CE3 prior to release. With the very high level of 3D and textural detail in Star Citizen, starting the asset creation work now gives us more time to do the time and detail intensive work which will hopefully make the actual modding process faster after the release of Star Citizen. Also, there is very little risk of the modelling work done prior to release going to waste; even if every other planned aspect of Freelancer: Unity turned out to be impossible once we got a look at the release version of Star Citizen we would still be able to, at the very least, release a top notch Freelancer ships and weapons mod for Star Citizen private servers. With that in mind the Shattered Worlds Development team has kicked the Freelancer: Unity project into gear.

The SW Dev team is actively looking for 3D modellers and 2D texture/image artists to help flesh out the detailed ship models as well as music and audio composers and coders for CE3 (and just about any other type of modder) for later in the mods development. Anyone interested in contributing or with more questions should check out our detailed FAQ or contact us on the Shattered Worlds forum (both linked just below) or just post here in this thread.

If you want more information about the Freelancer: Unity mod for Star Citizen then check out our FAQ or the main development forum on the Shattered Worlds Community site.

For more information about Star Citizen go to the main community site for Roberts Space Industries or one of the fan sites like SCBase.

If you want to learn more of our inspiration from Freelancer, especially the modding community, check out the Freelancer ModBD page or dedicated communities like The Star Port.

When we started this mod Star Citizen had less than 9 million dollars in funding. Since that time I have had new life-consuming commitments come up and my tiny team/community has fallen away from the project. In addition, Star Citizen is now at $72M and counting which means that the detail and effort going into it is now way way past what we were ever capable of achieving. This all adds up to this project being well and truly unsustainable. Anyone who has been around mods for a while will be unsurprised by this news given how long this project has gone without an update.
Our goals were much too lofty and this is just one more of the multitude of mods that turns out to be a fizzer, for which I appologise to anyone who cares enough to read this.

Hopefully SC turns out as good as we all hope, and soon!
Carnifex.

The FL: Unity mod is built on the game Star Citizen which has a huge list of amazing features that we can hardly hope to improve on and our focus will...

Even though the star citizen still haven't released yet, still keep up the good work!

It was a Great idea Carnifex, in the long run maybe unattainable but, awe... what a grand thing it would have been. Thanks for the effort.

why cant i find the download button on this page?

Because there isn't one. The mod was never completed. 'Tis a dream yet unborn. :(

Come on, this thing must go on! Ask every staff members of the different mods, Crossfire, Discovery, Tides of War. WORK ON IT TOGETHER! It's time to put aside the differences, freakin work together on this thing.

Also the RP thing was good, no it's not for Pussy Whipped. The game mechanics and all fits just perfect into the Roleplay universe. ;)

GUYS PLEASE! Don't stop working on this! It's awesome! :D

How true to the original do you plan to make this? The Liberty gunboat is nice, but mods (even recreations) often change things that don't need to be.

Well there was no Liberty gunboat in Freelancer so we came up with our own, that's why it stands out a bit. The Defender and the Sabre are very good examples of how close we intend to stay to the ship aesthetic. We might be a bit more liberal with the stations and we definitely intend to add many new weapon and equipment models.
As far as the lore and layout of the universe, we want a veteran from Freelancer to be able to dive right into the mod and immediately feel that it's familiar.

You should ask to redo the models from the discovery mod for freelancer those guys made some very good ships that were not in the orginal game but fit the styles of the factions perfectly :)

Right now we have plenty on our plate with just the models from the original game to make, lol. Maybe some day down the line we'll expand to new models and if any modders from the Disco team decide to lend us a hand with models all the better.