Developers of Battlefield 2 mod Forgotten Hope 2 are hard at work on their upcoming 2.15 and 2.2 update patches. Volunteer staff member, Patrick "XanT" Sotiriou, recently caught up with the dev team behind FH2 to talk about its roots and future additions. Read on to see what they have planned and view exclusive media for patch 2.15 content.

ModDB: Who are the talented folks behind Forgotten Hope 2? Tell us a bit about the team.

Forgotten Hope 2: Forgotten Hope consists of people from all over the world with different backgrounds. Contrary to what many people believe, only a handful work, or have worked, inside the gaming industry. Most have "ordinary" jobs, such as journalist, carpenter, computer programmer, archaeologist or locomotive engineer to name a few. Some people have only just recently joined, while others have been with the mod since 2002. The common factor between us is that we have a passion for the Second World War and the combined arms, multiplayer gameplay that the Battlefield series provides. 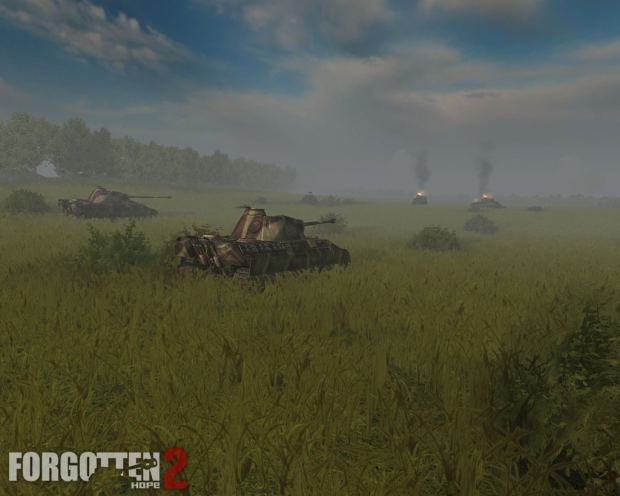 ModDB: One of the goals of Forgotten Hope 2 is to bring realistic yet exciting gameplay at the same time to gamers, combining those two elements together can be tricky. How do you think you have achieved that to make FH2 stand out amongst other modifications out there?

FH2: One of the reasons Forgotten Hope 2 took a long time to release was that we, basically, had to replace the entire [game's] content of an arcade style, modern combat shooter with realistic, World War II material. Features that are essential to modern combat may not be interesting or useful for WWII. So essentially we had to redo —or make new— everything from the ground up from scratch. We now feel that we stand very strong because our mod fundamentally differs so much from the original BF2 that we can offer something new and exciting that not many other mods have. Some features like large capital ships have been very hard to get working, but we hope that in the future this part can be implemented in the mod.

ModDB: Modifications in the past have jumped game engines because of engine limitations and not being able to implement their desired features into their project. Has this been a problem for the team at all using the Battlefield 2 engine?

FH2: We don't feel that switching engines would help us much at all. BF2, although [it] has many flaws, is still the best engine for what we want to do: a large total warfare modification with vast landscapes and a great many of diverse vehicles at varied locales. Also, we have overcome technical difficulties in the past as with the broken shaders in BF2 1.3 patch, and we will continue to do so in the future as well.

ModDB: Besides obvious graphic enhancements since porting the modification from Battlefield 1942 to Battlefield 2, how has developing under the BF2 engine impacted the overall gameplay of FH2?

FH2: For Forgotten Hope 2, we wanted to take the project onto a higher level. New features like squads, commanders and VoIP forced us to re-think the gameplay. The maps, in general, [have been] adapted so that it is very hard for the attacker to win unless he uses all of these new teamplay features.

ModDB: From your recent media updates, it is evident that the team are working hard on the upcoming 2.15 patch. I understand the Tiger Tank has made its way in-game as well as some of the German & Italian weaponary. What are the main changes/additions we can expect to see in the upcoming release?

FH2: Aside from the inclusions of the Italian Army and the Tiger tank, we are working on a new HUD system that will be better suited to a WWII shooter than the standard BF2 comrose. Also, we have introduced a grappling hook kit in the map "Giarabub" to make room for some real LRDG (Long Range Desert Group) assaults!

To try and get a hold on of some of the crashing problems we are running through the maps to make sure they are less heavy in memory usage, and hopefully this can solve the problems that some people are having. One of our modelers is also working on optimizing collision models for many of the Africa static [prop models] for much smoother gameplay.

The Grant tanks have had a seriously underpowered gun in our previous patch, which has lead to the British having difficulties on some maps. In this patch, the Grant will have the correct gun and thus be more powerful. In the first version, it was wrongly equipped with the M3 gun and in the second with the M1 gun —now it will have the correct M2. Besides this we have two new maps that will focus more on infantry combat, rather than the [vehicle] focus of maps in the previous patch. We also have some surprise vehicles [that] will hopefully make it into the upcoming patch. 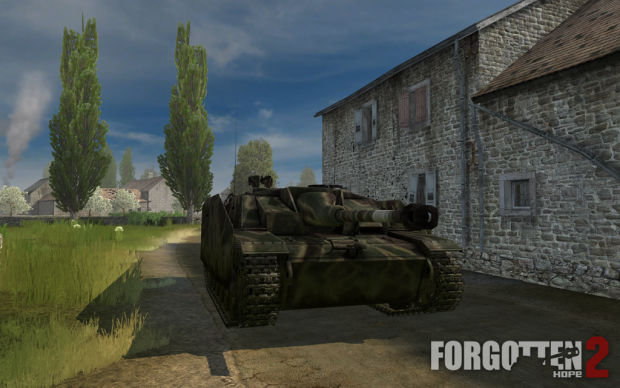 A StuG awaiting its prey.

ModDB: One thing I personally love about FH2 is the weapon animations and the crisp & sharp weapon sounds. Will there be many advances in these areas in the upcoming release?

FH2: We will have some sound improvements in the next release for guns and grenades. There will be some new animations for the the Italian weapons as well.

ModDB: I don't want to venture too far into the horizon but what light can you shed on the Normandy Theater of War (version 2.2) release after the 2.15 patch is out? You have stated that there will be new maps, weapons, vehicles, etc. Can you spill any information out to us?

FH2: Some Progress has been made for our Normandy campaign in both the mapping and modeling department that you will be able to see in upcoming news updates. Although we can not promise a release date at this point or even give a rough estimate, unfortunately.

ModDB: Making sure a modification is balanced is one of the most important factors in a mod's success, or any game for that matter. Forgotten Hope 2, being historically accurate, do you find it a challenge thoughout the entire development proccess (meaning between updates) to bring new and exciting features to the table whilst keeping it balanced for the best possible gameplay?

FH2: It is definitely harder to balance a modification like Forgotten Hope 2 where the weapons will be as powerful as they were in real life. This means that we can not ever have a "mirrored" balance like BF2 where all sides have the same ratio of equally strong weapons. We try to compensate for this in the map design, kit loadouts, and systems for limiting the more dominating weapons. But we would never compromise to the point where a Sherman could take out a Tiger easily only because some people find it hard to get into our mods philosophy. We are lucky enough to have talented coders on our team that work fast —and an ambitious beta team— so that implementing new features often isn't a problem. We also have a large enough team that the artists and coders can concentrate on their part and don't have to do extra work in areas that are not their specialty. This is how we can show off new updates almost every week. 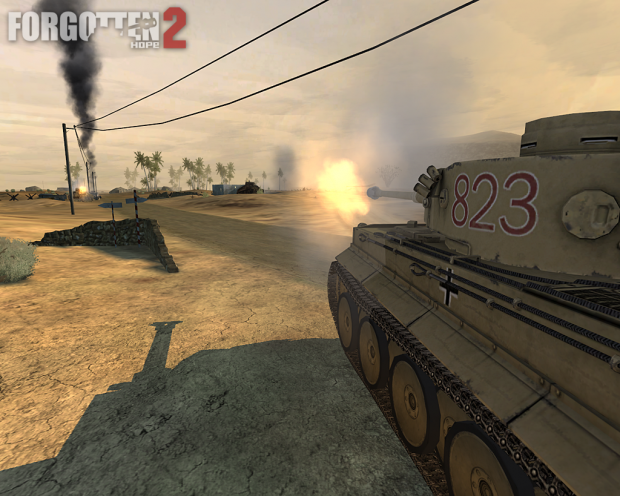 A fearsome Tiger moves in for the kill.

ModDB: The team recently announced the 4th anniversary tournament for Forgotten Hope 2 shedding some light on the competitive edge of FH2, which is fantastic. What I've noticed with modifications is that having a community base, especially one consisting of competitive gamers, is vital. At the end of the day you can have a perfectly polished mod but if there aren't enough people getting online to battle it out, it's a real let-down. How do you as a team keep the community side-by-side with developers?

FH2: We try to read and communicate with our members as much as possible on our public forum. Furthermore, we try to show our progress as much as we can with the weekly updates. It could surely be improved in such areas as supporting big tournaments and fan mapping. For clans, we know that 16 player maps are important and we have made one for almost every map released for Forgotten Hope 2. We have tried to make sure that they are all well balanced.

ModDB: This is probably the most dreadest question to developers but is there yet to be a set date for the 2.15 patch release?

FH2: Unfortunately, we can not give a fixed date today. Though we have already started to beta test, and our goal is to release it before, or around the same time as, the new BF2 patch.

ModDB: Thank you very much for your time, is there anything else you would like to add?

FH2: We would like to thank ModDB.com, the BF2 news sites, World at War, Forgotten Honor, and most importantly our fans for their tremendous support —without you we would be nothing. Hold on for the 2.15 patch, it's not far away now! 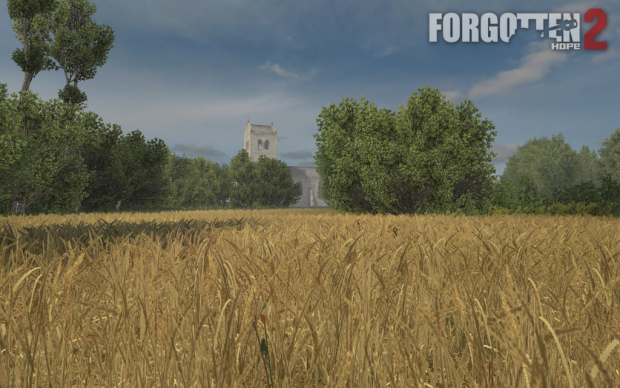 damn, got me on that last picture.

Wow that is some nice work. Love the standard of your work it`s amazing.

Great interview. Been a fan of FH hope since the first version for bf1942. Can't wait for the European Theatre maps!

Very nice interview. Ill be cheering for you FH2

Great interview! The Europe build is starting to get together and it shows. Congrats it looks awesome! Keep it up!

I just recently got to finally play this mod in all its splendor and I must say... this is the BEST BF2 mod that you can get atm.
Project Reality is great too but it's so boring and it takes hours to get to the action without a working squad, but with FH2 it balances realism and fun... so it never takes long to get to the action and when you do it's fun as hell.

It's a shame it only has one server though. :(