Forgotten Hope Tutorial Playlist (how to install and play)

With the release of Electronic ArtsTM Battlefield 2TM, the development potential has increased a lot. An all-new game engine and physics system brings the battlefield to life like never before. The new material penetration feature measures weapons ability to fire through barriers based on their composition and players will need to know the difference between concealment and cover in order to survive. Immense, richly detailed environments from city streets to remote forests, brought to you with brilliant graphics are some of the more exciting features of Battlefield 2TM. And we are going to bring all this to the Second World War.

With over 250 new pieces of authentic equipment, with tanks such as the mighty German Tiger tank and the diminutive British Vickers light tank, aircraft from the famed American P-51 Mustang to the antiquated German Stuka dive-bomber, and weapons including the powerful German Panzerfaust and the fearsome American M-1 Garand rifle, Forgotten Hope 2 has a wider scope than any other Second World War First Person Shooter, ever! 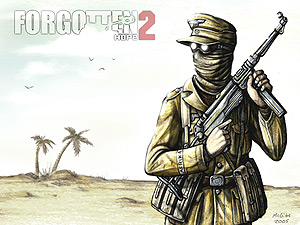 Winston Churchill once said "It is a mistake to look too far ahead. Only one link in the chain of destiny can be handled at a time." But we do look far ahead. The end of our road has not changed, only the stops along the way. Forgotten Hope 2 currently concentrates the battles fought between Allied and Axis powers in the North African and Normandy theaters of operation. 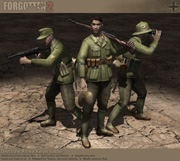 You will be given the chance to take part in maybe the most important campaigns of World War II. Fight alongside Rommel's Africa Corps in the harsh climates of the North African desert as you attempt to break through the British lines at El Alamein, or hold off attacking forces at Tunis. Serve next to American forces as you seek to destroy Hitler's Atlantic Wall at the cliffs of Pointe du Hoc, or break out from the Norman countryside in Operation Cobra.

"The battle which is about to begin will be one of the most important battles in history. It will be the turning point of the war." But it will only be the end of the beginning for Forgotten Hope 2. We will be ever expanding the mod to all of the theaters its prequel currently occupies, and more.

Whatever the side you choose you will have an almost endless armory at your disposal. Your weaponry will reach from knives to heavy machine guns to anti-tank rifles. Your equipment will contain everything from the first aid kit to magnetic hollow charges. Your motor pool will offer any type of vehicle, whether you want to drive jeeps, APCs, or tanks, and your airfields will give you the chance to pilot scout planes, fighters, and heavy cargo planes.

Forgotten Hope 2 will also offer different gamemodes for different situations. In addition to the standard conquest maps Battlefield is famous for, you will also need to destroy or defend strategic targets in objective-mode, or take tactical positions in a set order in push mode.

So whether you like house to house fighting in Tunis, tank battles in the African desert or dogfights in skies over northern England, Forgotten Hope 2 will have something for you.

For further information please visit www.fhmod.org and keep up with all the latest news, or feel free to peruse our archives.

Welcome to the Forgotten Hope Community!

Today we are announcing our upcoming Eastern Front Event, that will be running between:

We have decided to try something a little different with this event, and in addition to 2 maps from our pool of event maps, we are also adding 3 maps from the beta for gameplay testing. We hope to get some good feedback on how these maps play that can hopefully lead to their eventual full release in a future update to FH2. These three maps are:

This map is set in December of 1942, with the Soviet follow-up offensive to their creation of the Stalingrad Pocket crashing into the Italians dug in to the north along the River Don. 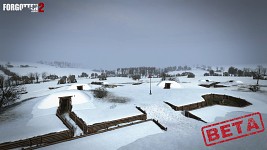 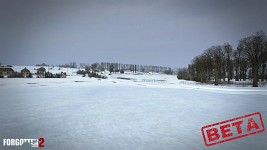 This map is set in the early part of 1942, at the site of a Soviet offensive to break through into the besieged Leningrad pocket. The Germans in this location have dug in on a reinforced railway embankment. 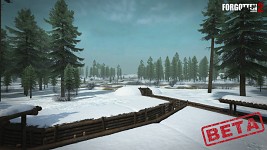 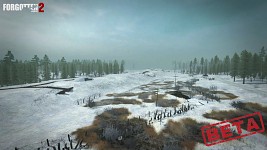 This map is set on 12th July 1943 as part of the wider Battle of Kursk. The II SS-Panzer Corps and 5th Guards Tank Army would find themselves tangled in an armoured melee. 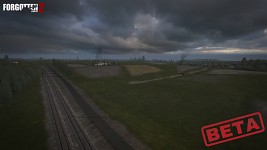 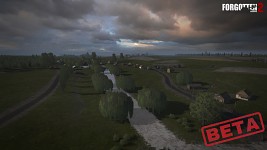 The full map list for the event is as follows:

In addition to the event, we are also releasing a few bug fixes and features in the required patch. There have been changes to the gameplay of Operation Mars 32 and 64 layers, as well as other minor bug fixes to other maps.

Ekiso has been hard at work under the bonnet and has unlocked additional rates of fire for automatic weapons. We now have 3 new values to pick from, and you will perhaps notice that some weapons have picked up speed a bit. This has also allowed us to fix the MG42 crash. In addition to this, we have also implemented the fix to the recoil of high r.o.f. weapons not working properly provided by Alon and Mats391 from Project Reality.

Finally, rifle grenades have had their firing dispersion increased. This is countered by a much more usable crosshair with range graduations.

Today we are showing off a new stock for our Sten MkII, as well as a pre-announcement of an upcoming Eastern Front based Event.

Today we show off the main rifle of our upcoming Belgian Faction, the FN made Model 1935 Mauser.

Today we are announcing our plans for the immediate future direction of FH2 following our recent release of 2.6.

The final announcement for this release to let you know everything is released. Come join us on the servers!

This download contains our launcher, which will ensure that you always have the latest version of Forgotten Hope 2 downloaded and ready to play.

I hope there would be Pacific theater maps in the future. Would love to see Fall and Liberation of Corregidor, Battle of Manila, some battles in China, Okinawa, and several battles in the island-hopping campaign.

We need Chinese. Although there are Chinese options in the settings, but FH2 does not support Chinese（My English is not very good）

Dear FH2 developers,
besides sincerely requesting for adding both the German and Italian dual-flagpoles to the Italo-German-combined Axis-side of the map "Sidi-Rezegh-1941",
now I would also strongly hope that You can add single-player-bots to the "16-Players mode" of the Map "Fall-of-Tobruk",
this is because : On such a small close-quarter-combat map of "Fall-of-Tobruk 16-Players" without any vehicle,
if You add Navigation-Mesh to it, all our players will surely be able to enjoy exciting awesome "Counter-Strike" liked "close-quarter-combat experiences" with computer bots on such a delicate and beautiful desert map with a church and multiple enter-able houses on it !!!
Thanks !

not to difficult to do it yourself

I feel so excited and cheerful to see You now having inserted the Italian-army's vocal commands and dialogues along with its original German dialogues into the desert map of "SIDI-Rezegh 1941" to facilitate a thorough set of combined-Axis Italo-German Forces human-voice package for this map !

This modification on the human-vocal voices of this map has made The Battle of Sidi-Rezegh fought by a combined Italo-German Axis troop much more realistic and rational !!!

However, on the Map of "Sidi-Rezegh 1941", only converting the vocals used by Axis-side to Italo-German bilingual version is far far not enough !

Therefore, I strongly suggest and recommend Your developer-team to deliberately add one more tangible flag-pole closely next to each ordinary singular German-flag pole at the Axis base and each capture-point on this map to enable the hoisting and flying of both the Nazi-German and Fascist-Italian Armies' flags side-by-side after the Axis has successfully taken each position,
simply-speaking, dual Axis flag poles should be present instead of just the single German flag,
moreover, all in-game Axis-army logos and decal-icons shown on the spawn-menu and mini-geographical-map of this Sidi-Rezegh map should also be changed from solely "Germany" to "Germany + Italy" which contain both countries' names and flag-symbols,
otherwise, a pretended "combined Axis-forces" with only the German flag and German icon displayed will definitely still look very fake, visually-unnatural and disrespecting to the participation of the Italian Army !

So one question, is playfh2.net safe? Bitdefender doesn't really like the files/ (the website too) from there. Also it seems to have problems updating to 2.6. Anyone else using the installer from there?

Yes, it is safe. Sometimes antivirus software will give a false positive though.

Historically correct, crude and with lots of violence, completely realistic, action in the most pure level, what else can be said about it? one of the biggest, and in my opinion, greatest modifications ever done for BF2, brings us the real feeling of the WW2. Epic.