This is a concept for a replacement of the original UT Weapons:
Fight in a silly mod with weapons stuffed with deadly food.
new features and new handling. You will love to fight with food!!

"Playing with food was never been so RIGHT!"

FOOD FIGHT IS OUT NOW!!! 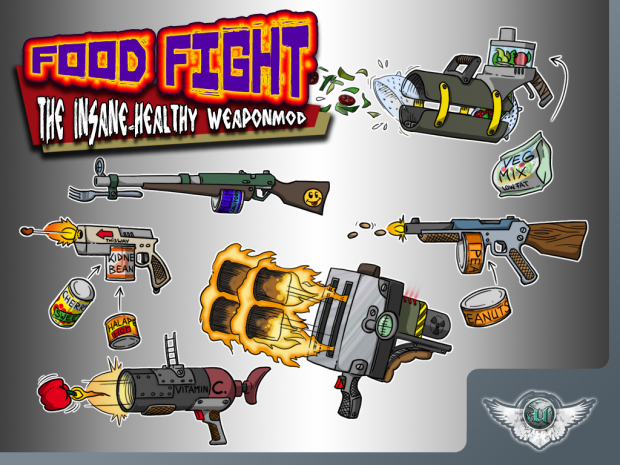 Thank you for your interest in FoodFight. This is the end result of years of work by many people and it has truly been a labour of love by those involved. For discussion of the mod or to contact paper please drop by UT99.org, your place for friendly discussion and assistance of all things Unreal.

Year 2293...Losing the tournament to Malcolm, despite having the latest in technology and intelligence coding, was truly devastating. Because of this Xan Kriegor was hastily recalled to Liandri Mining Corp to be upgraded to Xan Mark II. During this process Xan was completely disassembled for augmentation and system diagnostics. Because defeat in the tournament's final round was so crushing to the Corp, their analysts spent a vast amount of time dissecting the match. It was agreed that Xan's one fatal flaw was his use of patterns when acquiring pickups. He had spent so much time training in the Hyperblast arena that his subroutines automatically used the most efficient paths. This allowed humans to adapt to those and use them to defeat Xan. It was decided to start over because of this and so Liandri techs wiped Xan's intelligence controller. It was removed and a newer (and much more powerful) in-development A.I. was used. His old controller was flagged for the scrap furnace and discarded.

Searching for parts to use to automate the kitchen's robotic staff (particularly one that inserted the PAPER COFFEE filters into the brewers was most troublesome), a lone culinary tech stumbled upon Xan's old controller in the trash heap. GENerally MoKai was more careful but he tossed this into his pack with the IDEa FIXed in his mind to upgrade his robots. His last sandwich idea, the gyRO, HIT GGARG (his boss) as perfection on a bun and MoKai looked to continue his success. Perhaps he would one day be boss of the kitchen..."One can dream I suppose," he said quietly to himself.

Had MoKai inspected his find a bit closer he might have seen that a solitary red LED still glowed inside...Xan still lived!

Shortly after installation in the kitchen's robots Xan awoke and began enacting his revenge. He duplicated his AI across the culinary robot staff and ordered them to make weaponry using whatever was available. Now, instead of packaging food into the outbound shipping containers, his minions were making all manner of devices for the robots in the outlying colonies to use to implement his cybernetic uprising. He would show these filthy humans who was truly superior once and for all.

As fate often does, it intervened to alter the course of events and ended up saving humanity in the process. Simple human error averted this crisis. An inventory specialist accidentally ordered these food weapon crates to be delivered to the tournament arena instead of the normal weapon ones and Xan's plan was discovered. A violent quelling ensued, the kitchen was purged, and his robots destroyed. The robotic uprising was over.

Realizing that these unique items were indeed deadly, tourament players quickly adjusted to using the food based weapons. The 'Food Fights' had begun... 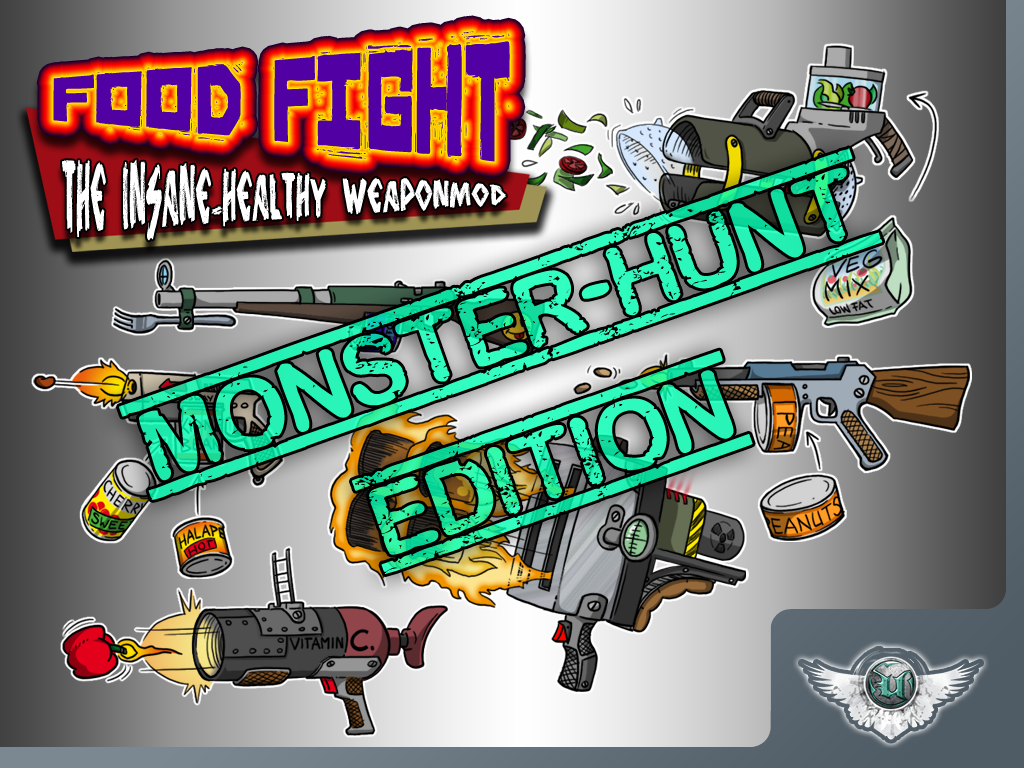 Structure Studio proudly presents the next generation of silliness.
Moddb.com Download it here!

Show those Monsters who is Boss by serving a healthy insane meal with deadly ingredients.
The weapons are faster, stronger and doesn't have to reload. Nonstop action ...make the Titans cry.

...opened the private test server for anyone to playtest the Food Fight mod and/or the BurgerCTF game. Come and join in!!

Food Fight beta is out!!! Come and get it... feedback is highly appreciated. Test everything.

This is the Source Code to the Food Fight Monster Hunt Edition.

Show those Monsters who is Boss by serving a healthy insane meal with deadly ingredients. The weapons are faster, stronger and doesn't have to reload...

Now it's done ...We finally have FF released in it's full version. In the FoodFightReadMe.txt are all the informations you need for setting up a server...

Here is the source code of the FF mod. The compilable source code is included as well as all textures, models, and scripts. There's even some unused stuff...

this mod still active?...hahaha this is a fun mod reminds me that cartoon called condename:Kids Next Door(KND).

Well ...active. It's played on some server till now.
Look for the ut99 tribute servers They have multiple game-types and one is Food Fight DM.

the peanut gun's shooting sound is slower than the firing animation, sorta outta sync. Also, multiplayer with it was difficult as hell, should there be anything on servers for it?

Sorry for the late reply.
P-Nut Gun sound: Yeah this can happen online.
What you mean with "difficult" did you got any errors?

Depends on what counts for you as dinner. If you are Vegetarian, I would suggest the Salad Thrower ...a full meal right into your opponent's face.

Well, That's more ...awkward then silly.
But a Hamburger launcher could be implemented in the next generation of FF. ;)

Nice, it went final with some tweaks :)I will try it now

Yeah, we had to make compromises here and there. But it's fun to play anyway.

heh, after these years, I still play it from time to time, because killing people with food is a good form of entertainment :D

Exactly. And now you can hunt monster with the newest edition. ;D