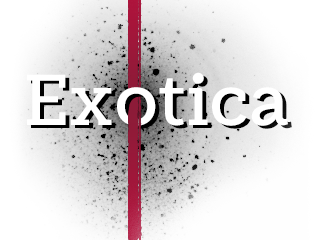 You will play as an explorer, exploring Exotica for the first time.

Exotica will feature towns, cities, villages, epic dungeons, mountainous regions, Islands, traveling from island to island by boat. This is a total conversion for the game Skyrim.
This takes place in a Fantasy world that is currently classified during development.

[Goal:]
My goal for Exotica is basically to create an Island out of a world, that is currently classified, for me and you the people to enjoy! I am always enjoying modding Exotica for Skyrim, and I want to create a fun mod for fun's sake! Hopefully I will be able to reach my goal, with God's help, anything is possible!

[Misc:]
Working on Exotica is not easy, but I do plan on uploading wallpapers from Exotica, just a few screens that I thought were note-worthy enough to be considered as a wallpaper. The wallpaper screen shots are located in the image section of Moddb.

[Thanks:]
Thank you everyone for your support, I hope you all stay with me, as I complete the mod.
-MOAVGproductions

Thank you everyone who are making this a popular mod on Mod DB!

God Bless you, everyone!

It has been a while since I've really officially posted anything about this game. Maybe too long, but it hasn't been forgotten! Since my absence, I have been pursuing my Bachelors Degree in game development, which will accompany my 6 other Associates Degrees I have earned. Through my studies, I have gained a lot of knowledge that I hope to bring to future projects that I will be involved with.

I have cracked open the Creation Kit after a bit of a hiatus, and I am looking at my mod with a different perspective that I did not have since my last official post. There are many things I want to change in the mod, and many things that I see that can be improved. That being said, the mod and game is a passion project of mine, and because of that, I can work on it at my own time, not being hounded by strict deadlines. With that being said, I still have no official release date of the mod, but I am still actively pursuing creating Exotica. My future plans is to eventually port the mod over to Skyrim Special Edition, and with that, hopefully Skyrim VR (which I got earlier this year). Depending on the time I can find to work on this mod, if I reach a point of saying, "I've had enough," then I will upload the mod as-is.

At its current state, Exotica is a handcrafted world. Which is roughly the size of Skyrim. Looking at the mod, it has taken quite a bit of time (years) to actually develop the world that Exotica resides in, and I can appreciate the hard work that I put into it for all these years. I am still a long way from "officially" releasing the mod, but in time, I do plan on actually releasing it one way or another. In the mean time, I will continue to periodically post updates of the mod on here.

Thank you all for your patience, and continue to support the modding community!

As soon as the Creation kit comes out, I'll be starting to work on Exotica! Until then, here is an interesting article I found from Computerandvideogames.com...

A bug has come up, and basically the project is on hold until I can get some help from the good people at TESnexus :) So stay tuned for more info! Thank...

Glad i found this website because this stuff is AMAZING!

Hi ! It looks realy interresting! I hope you're still working on it.

Thanks for your interest!
Yes, I still am working on it, rest assure! Though, it has become a bit difficult to work on it while also balancing college work. But, I still manage to find time here and there!

Looks and sounds very promising ! ill keep my eyes on this one. Goodluck