Europe In Ruins is an award-winning multiplayer-only persistency mod for Company of Heroes. Choose a doctrine, build your company, and take command in a persistent warmap campaign. Lead your company into battle against other players, and take your troops from fresh recruits to hardened veterans!

Well gents, it's been along time coming, but the Europe in Ruins Warmap has been released for beta testing by the community. Everyone in the community can participate and this is a great time to start EIR if you have not already.

Well gents, it's been along time coming, but the Europe in Ruins Warmap has been released for beta testing by the community.Everyone in the community can participate and this is a great time to start EIR if you have not already.

But first, what is the warmap?

The warmap is an interactive overworld environment where all Europe in Ruins players join battle for the conquest of Europe. Each game of CoH that you play will be reflected on the warmap and as you take or lose sectors, your company will be altered, you may receive new units, or you might get some temporary bonuses.

The point is that the Warmap takes full realization of the perisistant nature of CoH game play. Your men are on this warmap, fighting for every inch of ground. 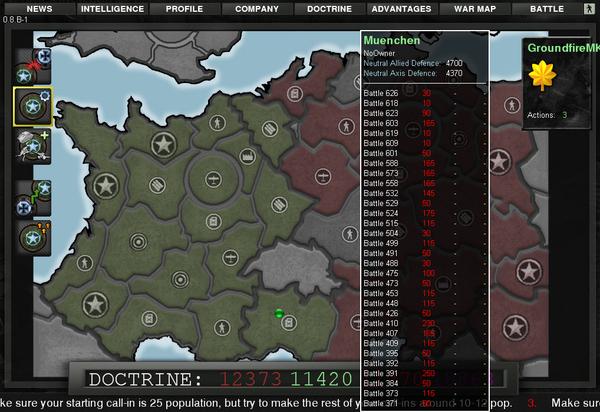 Every player in Europe in Ruins is on this warmap somewhere. They can do a variety of commands at this point. These commands either being to "Move" their company, "Attack" an enemy sector, "Defend" their own sector, or to "Support" players in another sector.

As the actions are ordered and the games of CoH are played through, the sector's defensive hit points will either be deducted or improved. Once a sector's defensive points hit zero, it is taken over by the offensive team and the defenders are moved to a friendly sector.

The warmap now decides which game mode the players shall play. At the start of each Europe in Ruins game, the Launcher calculates the position of each player on the warmap, takes their current orders into account and then decides the probability of which game mode will be chosen for the game of CoH.

For those of you not familiar with this process, the current game modes are:
Attack/Defend: One side defends and builds defenses for 4 minutes then the other team attacks
Meeting Engagement: All players enter the map at the same time
Reinforcements mode: The game starts out as a 1vs1, then as time progresses, the remaining team members come on map to help (2vs2, then 3vs3, etc.)

Each sector of the warmap will be worth something to the team that captures it. This is designated by the small icon at the sector's center. (Munitions point, Fuel point, etc.)

These extra resources are added to your team's pool of resources for you to purchase units on the company screen, doctrine unlocks, or special units.

Phase 2 of the warmap beta will allow players to access the special Warmap abilities and units.

Some of these new units are listed below: 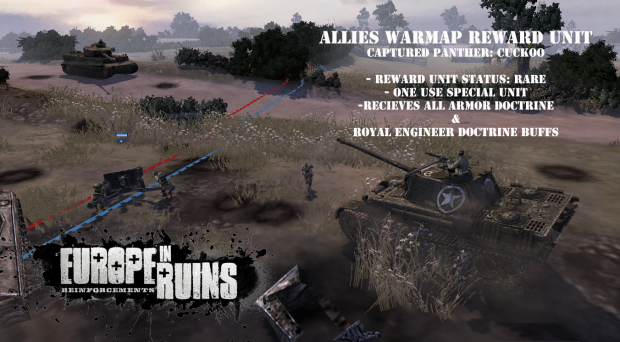 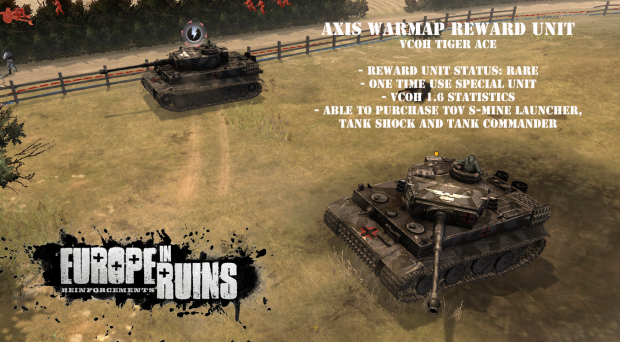 These warmap units will be granted based upon the warmap cards that each player receives after each game they play, among these special units, there will be cards that will grant players, extra resources, supplies, maybe a cool "offmap" and other things.

That's all for right now!

For those of you just starting out in Europe In Ruins, this is an exciting time to start playing! Make sure to download the mod at the top of the page, in the download link sources.

Thanks alot guys, and we'll see ya on the battlefield.