A single player mission for Doom 3, played over three levels. Includes a Quake style skill selection area. The Endarchy project started life as "Industri" on the Tenebrae engine way back in 2002. 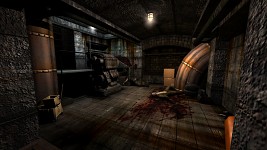 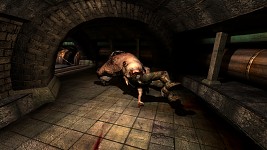 Even though Endarchy has been released, there has been a little bit of feedback about the UAC guys being a bit too trigger happy if you shoot them. So today I sat down and played around with their scripting a bit.

After many hours, I'm happy with the results so far.

The new UAC scripts need a lot more testing but I think the people that have had some issues with the soldiers returning fire will also be happy with the new version.

If anyone has any more feedback or issues with Endarchy, now is a good time to speak up as it looks like there will be a second release sometime in the near future.

It's called Endarchy and is a single player mission for Doom 3.

Even after 6 years in the works, there is room for improvements. Endarchy v1.0.1 adds a number of tweaks and game play changes. Endarchy is a Doom 3 single...

A little something "Tigger-oN" been working on for years is finally finished, out the door and ready for downloading. It's called Endarchy and is a single...

The effort put into this mod is phenomenal, this different environment give a fresh breath of air to the game compared to the normal one, and the way you repurpose stuff like animations or states in the npcs is so clever, like the way you reuse the pinky roar animation to force the doors, or the couple of civilians talking to you, but what impressed me more is the story, first you made a great twist a la Doom 1 where the installation happens to be in Hell, and the last one at the very end where is implied that everything what happened were just a videogame inside the installations of the UAC. Great job

Awesome write up. Thanks heaps for playing and taking the time to review!

Youtu.be
its a great mod, bit hard at places, but defenetly great

Thank you so much for the video walkthrough and the comments as you played. Totally enjoyed it.

Probably the best set of custom maps for Doom 3 yet, my only compliant is the difficulty of the final boss. It's hard to believe that this mod is already 5 years old, I was only 25 when I first played it.

Can anyone recommend me other mods/maps like this one? This is my favorite one I've played, mostly because it doesn't try to trash the horror survival-ish nature of Doom 3 like so many other mods do. I like that it keeps the slower pace of gameplay while providing an alternate environment/setting (the same old, same old industrial base type maps get old fast).

It's a shame that this mod hasn't been receiving more reception for the last couple of days. It's extremely well made, painless to install, stable performance, intricate map design, and well paced. I guess I'll do what I can to spread the word about this mod.

Thanks for the kind words. Great to hear people are still downloading and play Endarchy!

I am doing a youtube.com Lets play of this and so far this is the most amazing Doom 3 mod I've ever seen lots of potential
btw if you have any issue with me doing a Lets play on this let me know

Doom3 In My Dreams Doom III