Patch 4.2 adds the faction of Lothlorien with the supporting faction Mirkwood. Lead the skilled elves of the woods into battle, including many famous heroes like Galadriel, Celeborn, Thranduil and Legolas. Call the Beornings from Carrock or the Ents of Fangorn to help defeat your enemy!

Today, Patch 4.2 for the Demo of Version 4.0 has been published. You can download it directly with the launcher, just use the update function.

If you don't have Edain 4.0 installed yet, just click on the banner below to download the demo. Note that you'll still have to update this version through the launcher to bring it up to version 4.2 and unlock the Elves. 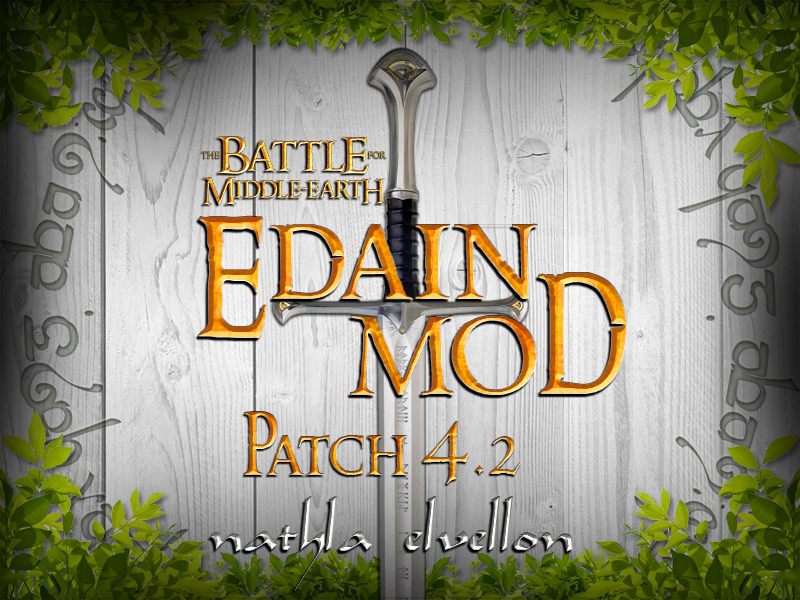 If you have any problems, as usual, visit our Support-Forum!

Patch 4.2 adds the faction of Lothlorien with the supporting faction Mirkwood. Lead the skilled elves of the woods into battle, including many famous heroes like Galadriel, Celeborn, Thranduil and Legolas. Call the Beornings from Carrock or the Ents of Fangorn to help defeat your enemy! Lorien lacks the raw strength of factions like the Dwarves and their fortress features bridges between the trees instead of solid stone walls. However, they make up for this in speed, stealth and the best archers in the game. The aid of Mirkwood brings more robust troops like the Palace Guard, better to hold a line in front of your bowmen. Are you up to the challenge of leading the Wood Elves to victory?

- The health of all units has been reduced by 20%. Note that this is an experimental change: We do feel that Edain 4.0 could stand to be a bit faster and hope this change will make battles more dynamic. However, we don't want gameplay to become too frantic either - that's not the kind of RTS we want to make. So we're eager to hear your feedback on how you like the reduced health!

- Economy Structures have all been reduced in cost and now produce the same amount of money inside a fortress and on a settlement.

- Catapults are slightly cheaper and deal more damage. Furthermore, they now deal a small additional amount of damage in a large radius. This is meant to be effective against large groups of clumped units, but less efficient if the enemy disperses his troops.

- Many abilities got new Sound Effects, improving the feeling of the game. For example, there will be different sounds for the horns of the different factions (thanks to the support from the English community), or unique sounds for Brand's falcon or Dain's Battle Boar.

- The AI has been partially reworked and so it should react more intelligently to the actions of the player.

- The performance of the game has been improved.

- Fortress Defenses will have a longer buildup time, so that they can't be constantly rebuilt in the middle of a siege.

- We have added several new Maps such as Pinnath Gelin, the Emyn Muil and the East-Road.

- Many mounted Heroes are now able to carry Hobbit heroes.

- The dwarves got different Scout Heroes and Scout Units. Erebor can recruit Nori, the Iron Hills have three Ram Riders, which can be upgrade to whole battalions later. Bilbo remains for Ered Luin.

- The dwarven realm of the Iron Hills will be supported by an unique sub faction, the Ered Mithrin:

- Rohan's Royal Guard now have an ability that greatly increases their strength against pikemen for a short duration. Rohan was too easily countered by armies of spears, so we decided that as the most cavalry-focussed faction they could have the one cavalry unit which is not as vulnerable to pikes as usual. However, you still have to time that ability well and can't just permanently cut through spears.

- Theoden's abilites were reworked. Instead of Hero of Helm's Deep he summons a Herold, who grants the same leadership to nearby units as Theoden himself. This allows you to split your army and still have Theoden's powerful boost present on all your units.

- Grond has been completly reworked, such that Grond is able to attack walls, move through destroyed gates and is defended by archers.

- Wulfgar got a new and more unique ability set. Now, his role and objectives in the game are stronger and he will support the Wild Men of Dunland better in the lategame.

- Many Designs and Elements of the Hobbit Movies have been implemented, including Thranduil, Tauriel, Beorn's Hut and the units of Mirkwood:

- And much more: Aragorn's horse, Thorin's runes, palantir images for the Dwarven custom heroes and of course many more that you can discover for yourself!

Further information were presented in the recent updates:

You may get an impression of Lothlorien in the trailer made by Prinz von Dol Amroth:

This is actually way better than I thought!

Thranduil and I have come to claim 4.2!: Youtube.com

Can not wait to play this, keep up the good work!

Update speed is so slow

Hey guys, haven't kept up with this mod in a while, have they finally released an English translation for it yet?.

OMG, your "while" must have been as long as the first age of middle earth XD
Edain has been in English since last april. 4.2 is something like the fifth version since then :P
You should get online more often :)

Bloody hell, really? You're right I do need to keep up.

the mallorn trees don't have their magic upgrades :(

Bugg with thranduil.if you give him gifts he get armor and when you put him on elk he lost he s armor

POst em n our forum in the bug section.

Already reported a couple of hours before the release :P

When thranduil mount on his elk lost the armour but you can give him again the armour. And he will stay armoured in the elk

I have question;
Will we see "Snow trolls of Angmar" as in original Witch King game again?
I think Angmar is more equal and a whole with trolls.

Angmar will not have trolls.

I can not play with Angmar's units since Edain mod,
*Too complicated
*In order to receive Knights, you must get the late game. Then this unit is nothing to Imladris' units,
i'm pretty disappointed

It'll be very simplified in 4.0, so Angmar will be much more simple to play :) You can read about it here: Moddb.com

Trolls will always be there operating machines and siege weapons, and as a little summon here and there ;)

So... I'm playing as elves, and the main structure is invisible... is there a load error or something?

Never mind, i Fixed it.

how do you fixed it??

Check in the launcher for updates again, something went wrong when downloading it.

All i did was check for updates again.

Brilliant work, Edain-team, I've only had a quick half-hour on the MOD, but it looks awesome and plays really well.

Hi, I suppose you've expected a random guy who would'nt like the idea of reduced HP. Could you possibly make this thing regulatable? Cause, you know, the elves are supposed to be brilliant warriors able to smite innumerable hordes of orcs, but I just see them being slaughtered by hostile catapults and archers, which reminds me of real-life warfare, not of slightly light-hearted fantasy world. So I just have to spawn armies and send them to certain, near and pathetic death in order to replace company after company every second. Passchendaele/Werdun - yes, but not the Legendarium. Maybe I don't get the concept, yet I hope there are other players who would support me.
Everything else is simply divine, you did a great job.

The reduced HP is EXPERIMENTAL. Edain is always striving to bring the best between the real middle earth, and gameplay balance.

btw a catapult or an arrow will kill anything regardless if it's a man, elf, or dwarf XD

but if you want the real feeling of a legendarium, wait for Imladris; Those Noldor will be fewer in numbers per battalion, but will have OP stats in comparison with any other single unit ;)
Lorien and MIrkwood elves are "lesser" elves in general, but they are specialized more towards archery.

I don't think Nori is very Dwarf-like in this version. He is using his fleshing knives (i.e. knives you use to cut meat with) as weapons. Wouldn't it be possible to give him his mace back? Either the one he has from the beginning or the one he arms himself with in Erebor?

Well... the mace is not very fitting for a scout hero. Also, the knives (he had them in the movie as well) are more fitting to his personality, being a shady, fast-paced rogue :)

Once more, thank you!

I really like how unique Lothorlien is compared to the other factions. Galadriel especially in her Ring Hero form is pretty bad *** too. Hope to see Misty Mountains in the next update. Keep up the good work. :)

Just tried to start it. Got an error "Invalid Sound 'UpgradeElfFortressGrenzwachterandGaladhrim'" This causes a game crash.

Try to update the mod again - if this doesn't work then you've probably installed another mod (like the unofficial patch 2.02)

Uninstalling and re-installing the mod worked. Thanks though!

Use the update button in the launcher.

Guys Im facing a problem I search for updates on my launcher and as soon I press "update" error windows shows up saying couldnt conect the server...can any of you help me with this?thanks in advance :)

My advice is keep trying, just give it time. There bound to be alot of people downloading today.

If you have an anti-virus try disabling its protection momentarily. And then open the edain launcher.
I have AVG and its the only way i've found to download the updates (or play LAN games too).