This mod expands economy with various gameplay tweaks, new trade goods, creates more strategic town development by adding more delicate buildings and upgrades, adds more balance and diversity between cultures. The economy of this mod is inspired with other games like Anno, Settlers and Stronghold series.
Overall goal of this mod was to try add more diversity and challenge to the game.
For first time players this mod may be complicated or hard, before using this mod, I would suggest playing original game at least once.

I made some additional mini mods that can be used to customize this mod and your game preferences.
- Units multiplier
This mod will incrise number of men in squads (x2, x4, x10), but not the numbers of siege mashines.
- Cities development
Fortified cities: start game with all cities on map beeing fortified with stone walls and some basic industry. Harder to conquer new provinces, easier to defend.
Classic cities: classic start as in normal game, randomly generated improvments. Easier to conquer new provinces, harder to defend.
- Education
This mod will change resource cap for books and number of books required to upgrade governors.
High education cost: Makes game more balanced and harder. Upgrades cost up to 9500 books, this will make books more valuble in late game.
Low education cost: Makes game easier. Upgrades cost up to 1500 books.
- Buy now button
Allows you to restore or remove "buy now building" button from game.
- Building stacking
Changes how building are upgraded, allows you to build more buildings.
- Law and Steel
This addon act like expansion for EEM. Adds new buildings, trade goods and more...

How to install additional features:
Open "2. Additional features", choose feature/version you wanna install, copy all files (defs, images, maps or Texts) into your main game directory of Knights of Honor. Overwrite when prompted. 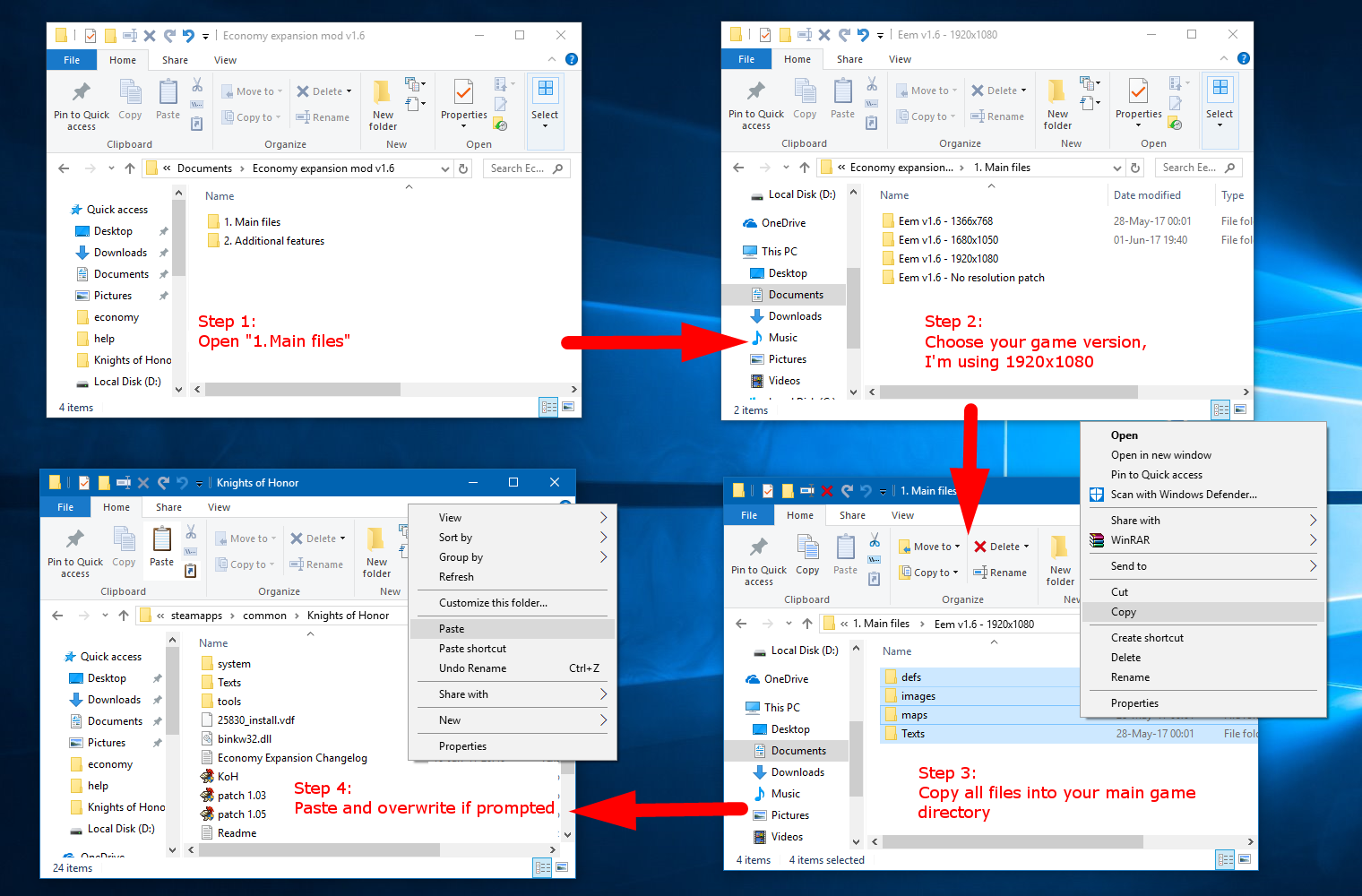 This mod can be used and included in your own Knights of Honor mods.
Please post your comments and suggestions on Moddb Economy expansion mod seite.

Thanks for voting and helping Economy expansion mod on it's quest to become the 2022 Mod of the Year. You are now in with a chance to score some free games from our #modlove collection. Help this mod secure more votes by embedding the widget (or link) we have included below on your favorite sites.

In this version I decided to add more trade goods into units requirements. Please leave your suggestions and comments whether you like this change or...

This mod is inspired by "Advanced Economy" and "Dusk of Glory" mods. It expands economy with various gameplay tweaks, new trade goods and creates more...

This mod is inspired by "Advanced Economy" and "Dusk of Glory" mods. It expands economy with various gameplay tweaks, new trade goods and creates more...

Hey! Such a nice mod! I really got bored playing the standard game and never tried mods. Yours is the first and it is so fresh! I had to restart at medium difficulty because you get beaten early game by big kingdoms. I actually enjoyed being overrun, never had that happened in the standard version. I really like the Building mechanic and the way to upgrade to advanced buildings. The only building worth a change would be the Cattle Farm > Butcher > Tannery. Is it possible to switch it? The randomization of goods and ressources at the beginning has a rare occurence of Salt + Pasture. In my current game with Athens, there are 3 provinces on the whole map with this combination Salt+Pasture. Kasan, Sinai and Saxony. Pretty far for Leather. I would use a Merchant to trade it, but no kingdom builds the Butcher. Makes it very hard to get kingdom powers. Hope this game and your Mod are played by more people, because Knights of Honor 2 is on its way. Until then, I will enjoy your work!

Hi, I'm glad to hear you are enjoying playing this mod.
You can change buildings requirements or how they are upgraded by modifying file "buildings.in2" located in defs > economy.

Thank you for the quick reply. I am really into it. The balance and the pace is way better now. The AI makes good use of the defensive buildings! I will try that, thanks for the info. I also having the issue that I can't reunite Greece. I captured the provinces to unite it with Athens, but it didn't work. Maybe it's because of the german language pack that I installed...

I've checked greece unification event, it should work despite of german language pack.
The conditions for event are:
High period (not avaible in Late period)
Play as Athens (Orthodox)
Control regions of Hellas, Solun and Thrace

Awesome work, Thanks for hard work. I play this game after a long time and with this mod i am enjoying it.There is too little BUILDING SLOTS in Town Improvement ,with this mod we want more building slots (there are only 18). and can you also increase the number of free places on royal court. waiting for your reply. Thanks.

Hi, thank you for playing my mod and on your suggestions, unfortunately I can't make those modifications, I tried but it seems that some of those parameters are hard coded and I don't know how to change them.

Sorry if this was asked before, what are the effects of the Military Order building on a town? The description doesn't say what it does.

Great work on the mod tho. Had a lot of fun! Best wishes!

Hi, Military Order has no economic effects on town and province, it's prerequisite for Hospitallers, Knights of Calatrava, Templars and Teutonoc knights.

Hello there! Thank you for bothering to answer! :)
I have another question, I have installed Ultimate Mod and then updated it with EEM and Law and Steel. I am unable to apply the x4 Unit size Military mod. I have done as per your instruction, extracted the "def" folder in the game main directory, and even tried extracting the individual folders from your "def" into my "def" folder. I extracted EEM x4 first, then Law and Steel x4 second.
Did I do it right?

Small update: I've tried the x2 and x10 Mods. They work without a a problem. So the only one that doesnt seem to work is the x4 unit mod. I will be playing with the x2 mod, just wanted to keep you updated.

Once again, thank you for your time and the effort you put into this mod. It's amazing!

Thank you for reporting this to me, I'll look into it and fix it for next release.