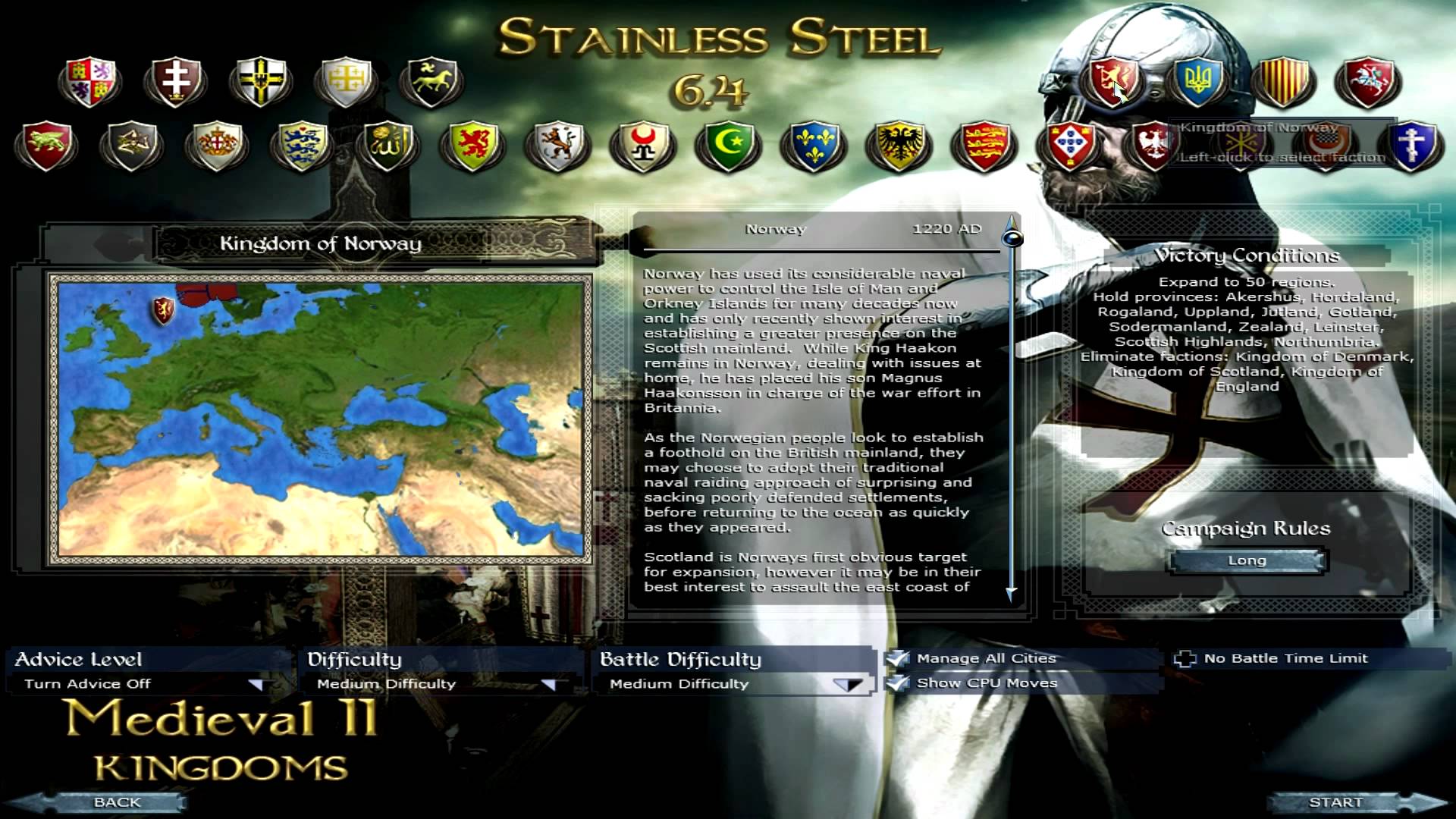 This is a mini-mod for anyone who wants to play the historical battles in SS 6.4.

Stainless Steel version 6.0 by King Kong. See File/Full Details for all the features for those of you who do not know of this mod, as this is massive...

Stainless Steel version 6.0 by King Kong. See File/Full Details for all the features for those of you who do not know of this mod, as this is massive...

Re-posting under my new Acct.

Sharing my recent experiences about the 6.4 version - 1.27 BugFix Compilation.

Had great fun playing this mod until.. you can't play no more.

First, I played the Ukrainian side (Grand Duchy of Kiev) and managed to play for 444 turns. While I didn't actually win the contest (Fatimid Caliphate did), I still grabbed the whole Northeast quarter of the map: all lands North of Black Sea and Caucasus, 32 regions. In the Overall ranking I took my faction to 2nd place. My finances chest power was a bit more than 100,000.. florins, ducats, talers or whatever. At this point I couldn't find anymore a way of voiding the constant crashing of this mod, when rolling forward to the next turn.

Then, because I was reading some Roger Crowley books about Mediterranean history, I started to play the Republic of Venice side. This time I achieved the contest win, but only could play 306 turns, before hitting the "no matter what" crashing wall. I grabbed 49 regions all around the Mediterranean Sea and the Southeast - South - Southwest shores of the Black Sea. My faction possessions stretch from Murcia/Oran in the West, to Kutaisi/Caesarea/Antioch in the East. My chest holds more than 150,000 "ducato" (historic Venetian currency at the time of the game: year 1405).

I have to say that the game crashing becomes constant before hitting the 100 turns. It's only that, for a while, restarting the game, or your PC, allows you to continue the game. It feels like "out of memory" issues that get remedied by itself when the game is closed and reopened. But all this works - even though taking down full enjoyment of the game - for a while. In my two experiences above, up to somewhere between 300 - 500 turns.

Have you got the 4gb patch installed? Sounds like a memory issue you're running into, which would explain why when you reset the game it started to work again. Stainless steel isn't supported anymore, there are mods that have continued its development however,Roar of conquest automatically installs the patch plus stainless steel and broken Cresent, it's stainless steel but functional and fixed

i have found the large address aware patch helps immensely with crashes, it allows the game to access more RAM. i too was having repeated crashes and that patch fixed it, you can find it here on moddb: Moddb.com

like 1 in every 3 battles i get graphics card errors, any solutions?

Either get the 4gb mod on its own, or installed roar of conquest that installs the mod automatically. It's a continuation of stainless steel and it's extremely stable on my end