Looking for a great game of Star Wars: Empire at War but feel they lack the true epic experience of canon game play true to the Star Wars Legends universe?* Then you've come to the right place. The EAW - Realistic Mod is making the game what it should have been like; epic space combat that will leave you on the edge of your seat! By returning the full armaments to every ship, you've got a ticket to one intense light show! Yes, that means over 100 weapon emplacements on an Imperial I-class Star Destroyer!

Please keep in mind that this mod is in early development and you may disagree with some parts of our mod. We are taking suggestions and are looking for dedicated testers to provide feedback and to hunt any bugs we may produce by accident.

* Legends is the canon Star Wars before Disney took over and removed the entire Expanded Universe (Grrrrrrr!). We have yet to find any part that is not considered to be officially canon though.

Greetings folks, it's been awhile hasn't it. This time around I've got a decision to make that I want your opinion on in addition to reporting on what next and the usual things discussed in these posts.

Version 0.06.0 released smoothly, no one mentioned any bugs or other issues so that's good. Except there are problems. Not certain if any of you have encountered them but a friend of mine can't launch his FoC with the mod installed. And before anyone goes crazy in the comments yes, he did have all the patches installed. Now what does this mean I can't possibly hear you ask? Well, this is further evidence that I need to create the consolidated version of the mod (less actual hardpoints, but the remaining ones will receive damage and possibly accuracy buffs). 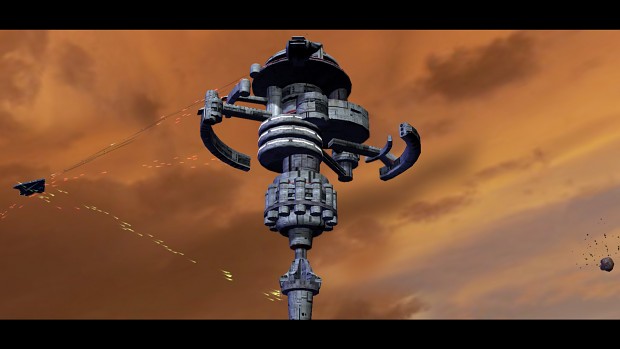 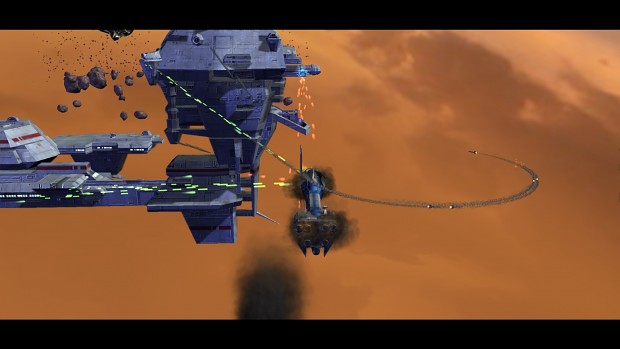 Now, as you all know, the Imperial Star Destroyers and MC80 Liberty cruisers are the only two standard ships from the base game left to modify however, with the port over to FoC, brings with it some new units that will need to be modified. They may or may not be modified for v0.07.0 as I'm sure some of you would like to take the two capital ships for a spin! I would like to re-iterate what I have said earlier about the ISD though; the model used in game depicts the Imperial II-class SD with the eight barreled turret but I will be featuring the weapon complement and other stats of the Imp I-class. This is due to the first IIs only coming out of production very shortly before the Battle of Yavin and not all of them would have been dispatched to deal with the Alliance threat.

So, at the beginning I mentioned I needed your opinions and thoughts on something. That something are TIE/ph Phantoms. If you are aware, the TIE Phantom designs were lost in the destruction of the Imdaar Alpha factory and only a handful of Phantoms survived. So I ask you, should the TIE Phantoms be removed from the game? With that, I'll finish this post here!

Our goals for version 0.06.0 and our announcement for the final release version.

Today, we reflect on our v0.04.0 release and give away some big new changes coming to the EAW - Realistic Mod!

Today we discuss what our first and foremost objectives are for version 0.4!

Both capital ships for the Empire and Rebellion have been overhauled! Now you can fight with the best ships both sides have to offer. Not much more to...

PLEASE NOTE: This file applies to the base version of Empire at War WITHOUT Forces of Corruption. Both capital ships for the Empire and Rebellion have...

This special release features condensed stations in an attempt to avoid the Exception error occurring with some people. There is no guarantee that this...

The station upgrade era is here! ALL tiers of Rebel and Imperial stations have had their weaponry increased and enhanced as well the overall Health, Shielding...

A quick fix in relation to the weapon hardpoints on the Victory II-class Star Destroyer where more than the topmost hardpoint is targetable. Special Patch...

It's update time again! Version 0.05.0 is here and we've brought a lot of changes. Finally, the Victory II-class Star Destroyer has been modified so those...

I know in a comment of you mentioned you wouldn't add anything new to the game. Technically, the TIE Advanced is a unit already in the game, even if it's part of Darth Vader's squadron, would you make that exception?

Sorry, never got a notification on your comment. Unfortunately the TIE/x1 didn't make it into mass production and only a handful of dedicated squadrons were seen in the Civil War. Seeing as I'm trying to simulate the wartime environment, it would be unrealistic for all TIE/x1 squadrons to be located so close to each other.

Instructions for use with mod launcher.
1: Create folder for realism mod.
2: Copy data folder from FoC directory to folder you created.
3: Cut the xml and put it in the data folder.
4: Overwrite duplicate files.
5: Start mod launcher and you can play the mod without needing to backup the OG game files.

do you plan to add new ships after you finish overhauling the new ones?

No I don't as I still believe it is important to preserve as much of the original game as possible. Every ship has its purpose, adding more would just dilute those roles.

Before I download this mod, can you tell me some changes you made to FoC?

All ships that came as part of the base EaW (the new ships in FoC have not been edited yet) have been modified to give them their true weapon complement as per sources such as Wookiepedia, shields and health have been adjusted accordingly however, this is still an ongoing process as playtesting will reveal just what amounts are necessary, as well fighters and stations being altered in accordance with what would be expected of them to operate with the modified vessels.