This mod has not been released yet!


The factions for the alpha will be the Imperials and the StormCloaks. We are defiantly adding others such as Thieves Guild, Dark Brotherhood, The Companions, The College of Winterhold, Nightingales and Blades and many more. Their has been a long discussing wither or not we should allow the player to turn into a wolf while being in The Companions it will be most likely. You will be able to pick wither to be a warrior, mage or thief at the start of the game, we were discussing wither or not the first fight with the couple of bandits should be where the dragons attack (yes dragons may be added *flyable* also) it will most likely be that, we probably won't make them purchasable as it will be too op, but they will be available to try and kill in caves that we will add to the map.


We will be spending a lot of time on making the map.
The area of Skyrim that it will (initially) cover. In later releases, more of Skyrim will be accessible. 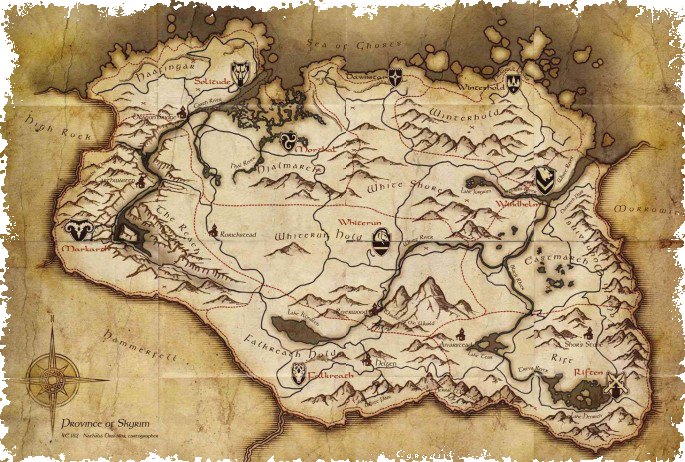 
When will this mod be released?
We don't even know that. But we will notify everyone when we have one. Most likely late this year (2014) or early next year (2015). We plan to make this mod very big.

Why have you made the guilds, minor factions?
Just to make the Mod more interesting and entertaining, plus these guilds will
have plenty of power to compete with the Imperials and the Stormcloaks.

Do you plan to do the rest of Tamriel?
Depending on how Skyrim goes... Then yes.

Will dragons be added? And will they be flyable?
The chance will be very, very low that we will be adding flyable dragons. But we
will attempt to. They may also turn out very buggy and we may not be able to fix
alot of it, we will see how it turns out anyways and get back to you guys.

Are you guys dead?
No. We are focusing more on the mod for now, we will sure to be posting stuff about it soon.

Do you really have to be in the alpha testers to test the game?
Because of big demand for the alpha. Alpha 1.0 will be released to the public, future versions of alpha's will be set to the alpha testers.

Will this work with the current version of Mount & Blade: Warband
Obviously.

At the start of the mod, will you start off in Helgen?
Perhaps. If we do it obviously won't be the same re-enactment.

Overall thankyou all for reading, we really appreciate your time and patients towards the mod.
Thanks.

We just finished modelling the default Iron Sword you will get first at the start of the game. This is an untextured version of it and of course we are working on the textures for it, if you have any suggestions on what we should do next for our next weapon feel free to put that in the posts, and please keep coming up with the great ideas and the improvements we should make because it really helps alot, and also the questions because we are happy to help or to answer any question you may have.
And please feel free to comment on how we should improve it.

Should Morrowind at some point be apart of our mod?

Should we add Morrowind? If you think you have a good answer for us please feel free to comment below.

I owe you all an apology, I was very disappointed that the release of this mod did not continue. We put hard work into the mod hoping for a release.

But,
It wasn't that Bethesda would not allow the release of the mod, we did not have a problem with editing Skyrim's music to avoid copyright. But life seriously got in the way, all of us are dealing with different life situations and we were unable to continue on the mod.

I haven't jumped on ModDB for a long time and I can see that neither have the others, so I thought it was my responsibility to formally apologise to everyone and to announce that we are looking towards a Skyrim mod for bannerlord. So, stay tuned, and stay gaming!

well, thanks for at least providing closure

The mod died because Bethesta does not allow mods from other games without permission. that's why some mods did not release like this one.

eh wrong it was because of life

Why is the mod dead?!

It seemed like a really good mod idea Skyrim mod?

Then you left it!

if developers want a to make a mod,

they should be able to finish it up

Dude time and Life get in the way, things pop up and people can't always keep to commitments. so don't get up set with people who weren't able to keep to things because of life.

you,a SITH, said that, mind you.

only sith deal in absolutes