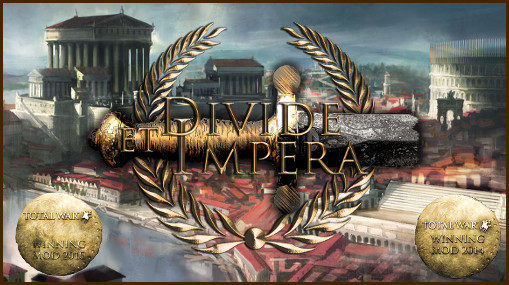 Divide et Impera has won multiple Creative Assembly awards including Best Overhaul 2014, Most Innovative 2015, and Player's Choice for both 2014 and 2015!

Introduction
Some of our overall goals and general vision include:
- Increased difficulty and complexity for the player. We want to provide a real challenge while maintaining fun gameplay.
- Added mechanics and content to make the experience more immersive and realistic for the player.
- Overhauled faction rosters and units for historical authenticity and stunning quality in battles.
- Battle mechanics that are a more accurate representation of ancient warfare.

Mod Information
Due to the size and scope of the mod, it is difficult to list every single change that is made. The two primary areas we have focused on are (obviously) campaign and battle systems. Our goal for the campaign is to provide unique, immersive, interesting mechanics that add to the overall realism and fun. In battles, we have focused on redoing every unit with amazing, new textures and models that represent historical sources while overhauling the battle mechanics to represent ancient warfare.

Here is a very general overview of some of the more major changes and custom content:

Campaign Content
- Custom Reforms system independent of the technology tree. Most factions will gain new units based on imperium level and turn number.
- Custom, Unique Supply system not found in any other mod.
- New playable factions with overhauled rosters and historical settings.
- Cultural Recruitment system based on local and core factional troops. Your cultural control matters in what troops you can recruit.
- All new Campaign set in the Macedonian Wars, completely unique to the mod
- Custom Season effects that really impact gameplay on a meaningful level. These vary based on location.
- Custom Character and Army system:
- Custom skills that allow immersion and roleplaying with characters (customized version of TTT).
- Custom army traditions based on culture.
- Dignitaries are now Governors who help oversee provinces. Other agents have been limited in their effectiveness compared with vanilla.
- Armies now have food and public order impact. Garrisoning troops has new effects and penalties.
- Custom army and navy stances based on culture. All new stance - Patrol Region.
- Custom Cultures for various factions, including new temples.
- Custom defense scripts for Rome and Carthage
- Various script and other custom content to add to immersion.

Building and Resource System Overhaul
- All new resources that have a major impact on gameplay and building requirements.
- Many new custom buildings that allow for many more options and use of the new resources.

Units, Textures and Models
- Over 1700 units that have been fully customized with all new textures and models to match historical references for each faction. The amount of detail and research is something we pride ourselves on.
- Fully developed Area of Recruitment system that allows for regional recruitment of units historically from a given region. Any faction can recruit these local units if they own that region.
- Overhauled Roman auxiliary system with local, specialized troops from regions across the map depending on reform period.
- Custom, all new mercenary units for every province.
- Many, many new weapons, armors, and other models/textures. To list our texture/model work would be a thread in itself.

Battle AI Behavior:
– AI should now use disciplined formation in defensive battles.
– Both Shock and Melee cavalry are classified as shock cavalry now to improve AI use of those units.
– Infantry without ranged weapons will now properly brace vs cavalry and will use non phalanx formations properly.

New Special Horses & Cavalry Changes
– Various units now have special horse types that give them specific bonuses.
– New Thessalian horse entry that combines both speed and charge power.
– Numidian horse that lacks charge but has great speed/acceleration, guerilla deployment and ignores ground penalties.
– Celtic Mairepos warhose that has speed and a greater charge power due to size.
– New Parthian Nisean horses as well.
– Camels now have custom weapon entries with a combat advantage over horses and a larger morale hit against cavalry.
– Reduced and added more variety to cavalry running speeds.
– Elephants have been reworked – they are more resilient against ranged and a bit easier to kill in prolonged melee. Fixed an issue where some tower elephants had double the hitpoints intended.
– Reduced strength of frontal cavalry charge on fresh units but increased ratio of AI cycle charging. AI will cycle charge less if they are doing well in melee.
– Cavalry takes larger casualties when pulling out of combat.
– Iberian horses once again have their unique look and changed look of Iberian armored horse.

Naval Overhaul Summary from Demosthenes26
– Ramming speeds, acceleration, and base ramming damage have been increased to make ramming more effective. Most ships can sink a ship of the same type in two rams. This makes double-teaming a great tactic, as a follow-up ram from a short distance has reduced force.
– Updated the recruitment templates for all AI Hellenic factions, reflecting battle fleets and patrol fleets with historical faction considerations. Generally an “early” and a “late” version of each, with the late version given preference once those ships are available.
– More Scorpions added on Tetreres level ships and up.
– Lighter vessels now have further campaign movement range than heavier vessels, allowing for patrol vs battle fleets.
– More Hellenic factions can recruit Hexaremes and Hepteres, with variation depending on the faction.

New Capital Change Button
– The button has been moved to a new location in the top right of the settlement panel. Thanks to DETrooper for the UI wizardry!
– The button will no longer have the overlay problem for some players after battles and will no longer open the encyclopedia when clicked.
– Some text issues fixed.

Major Campaign Changes
– Barbarian transport ships will now be immune to attrition when near one of their cities.
– Fixed AI Carthage’s defense script and made it more robust.
– Women generals for factions that have them now receive the Commander/Brawler/Scholar traits.
– Women politician-only characters now have special personality and background traits. Existing women in save games will retain older versions of these traits.
– Agents now have new background traits with effects better suited for them. Existing agents retain older traits.
– Fixed various ancillaries that were triggering but not being assigned (thanks MrTimbe!) and lowered some chances for ancillaries that were happening too frequently.
– Slight reduction to overcrowding effect on 1st class population.
– Commander trait will no longer decrease from “close victories”.
– Intellectual trait has a slightly higher chance to increase and slightly lower chance to decrease.
– New faction emblems for various factions to make them more in line with other emblems. Thanks to Jake!
– Unit costs and upkeep have been recalculated based on new stats and battle changes. Also, various core mercenaries have had their costs properly increased.

All Factions Playable Submod
– Victory conditions have been added for all factions.
– New frontend map images for all factions from Lugos. Huge thanks!
– Fixed issue where autosaving wasn’t working properly.

Credits
– KAM for all the crazy hard work on so much of this update – from the battle changes to the Media overhaul!
– Mr Timbe for the hard work helping to fix the ancillary issue and the great help with the barbarian supply transports. Big thanks!
– Lugos for all the great work on the AFP submod art
– DMW for the hard work on the faction trait ideas
– Big thanks to DETrooper for the UI work on the change capital button!
– Thanks to Jake for the new Media emblem and many faction emblems.
– Thanks to Paladin94610 for the help with various fixes!
– Once again big thanks to sourav for the Media unit cards.
– Major thanks to Demosthenes for all the work on the naval changes
– Thanks to Celticus for the new sword model and helmet texture.
– Thanks to Shapur e Sassani for help with Median names.

The latest version of Divide et Impera has been released on Mod DB. This award winning Rome 2 overhaul mod now has many new features and changes that...

Latest release before 1.0 is released and bring you many new contents.

Preview of the Lugii, a new playable faction in DeI v0.95 that has been completly overhauled.

DeI version 1.2.8 Part 1. Divide et Impera is a mod for Total war Rome 2 and this is the latest version.

Part 2 of the mod DeI, version 1.2.8. Divide et Impera is a mod for Total War Rome 2 and this is the latest release.

New version release 1.2.7 of DeI. Both Parts required. Please see our website for more information, thanks!

New version release 1.2.7 of DeI. Both Parts required. Please see our website for more information, thanks!

New version release 1.2.6 of DeI. Both Parts required. Please see our website for more information, thanks!

New version release 1.2.6 of DeI. Both Parts required. Please see our website for more information, thanks!

When does divide et impera 1.3 come out?

Fantastic mod! its a pitty is impossible to go on to play becouse each city goes in revolt every turn over and over ... makes impossbile ti become an empire (i augustus mode)

Same goes for the population system. really nice idea. But the problem is that it combines relatively realistic, historical population sizes (just tried Rise of the Republic: initial population of Rome = 30,000) with unrealistically small in- game army sizes.
The point of the population system should be not to deduct accurate numbers from the population, but rather to limit how many good units the player can recruit. It should encourage the use of cheap, low-level troops over elite troops. Otherwise why else do we even need to have units like Latin Tribesmen in the game, if there is no point to use them.
Third Age 4.0 is doing this really well, how it limits the use of good troops.

This could be achieved by deducting much larger numbers from the population for each recruitment.
currently there are like 2,000 Patricians in Rome, and for one Triarii unit it deducts only 200.
I don't want to be able to recruit 20 Triarii units from one province until I have to stop. Rather the desirable maximum should be around 4 units I think.

Hey very impressive mod! Can I just say 1 very minor thing? In imperator Augustus Cleopatra is supposed to be 28 and she's 18. Can you fix this?
That's all.

I have DEI installed and I’m in the middle of a campaign. I haven’t played in over a year however when I look at my mods panel in the total war launcher it appears my DEI has been auto updated to 1.2.8 which is great!

Long story short, does DEI auto update when the patches come out etc or have I updated it since august and completely forgot?! 😂

does this work on emperor edition? my game crashes on startup,im running the latest by the way

The Best overhaul mod for Rome 2 TW at the moment. New mechanics, tons of new units, reforms, even more realism but without making it unplayable. If you've liked mods like Europa Barbarorum for Rome 1 you will like this.