You, James Smith (served in SWAT for a decade with no failed ops), on vacation going to visit your family. Driving on a deserted road somewhere in Utah, the car breaks down. With miles of nothing behind, J. decides to go forward and stumbles upon an abandoned rock/sand processing factory with just one yawning guard sitting there. Pointed by the guard, J. walks behind the factory to find the phone. When he comes back, he only sees two army trucks and the dead guard… J.'s curiosity leads him inside the factory only to find that this place is absolutely not what it seems to be…

PLEASE READ:
If you find your model/texture in my mod and want it to be removed or want to be credited - I'm always up for it. I respect everyone's work but I can't track everyone down for every texture and model used. Please contact me @Aynekko if there's any problem. The mod is completely free and I'm not going to claim used content as mine unless I made it by myself.

Hello my friends! It's MOTY time, so without beating around the bush, please consider to leave a vote if you like what you see below. Now, to the updates:

At the moment I'm reworking the maps of chapter 2, which were originally made in 2016 or so. Adding props, scripts, npcs, reworking old not-so-good-looking places, and so on. Here's a few screenshots of this chapter, and some action as well. 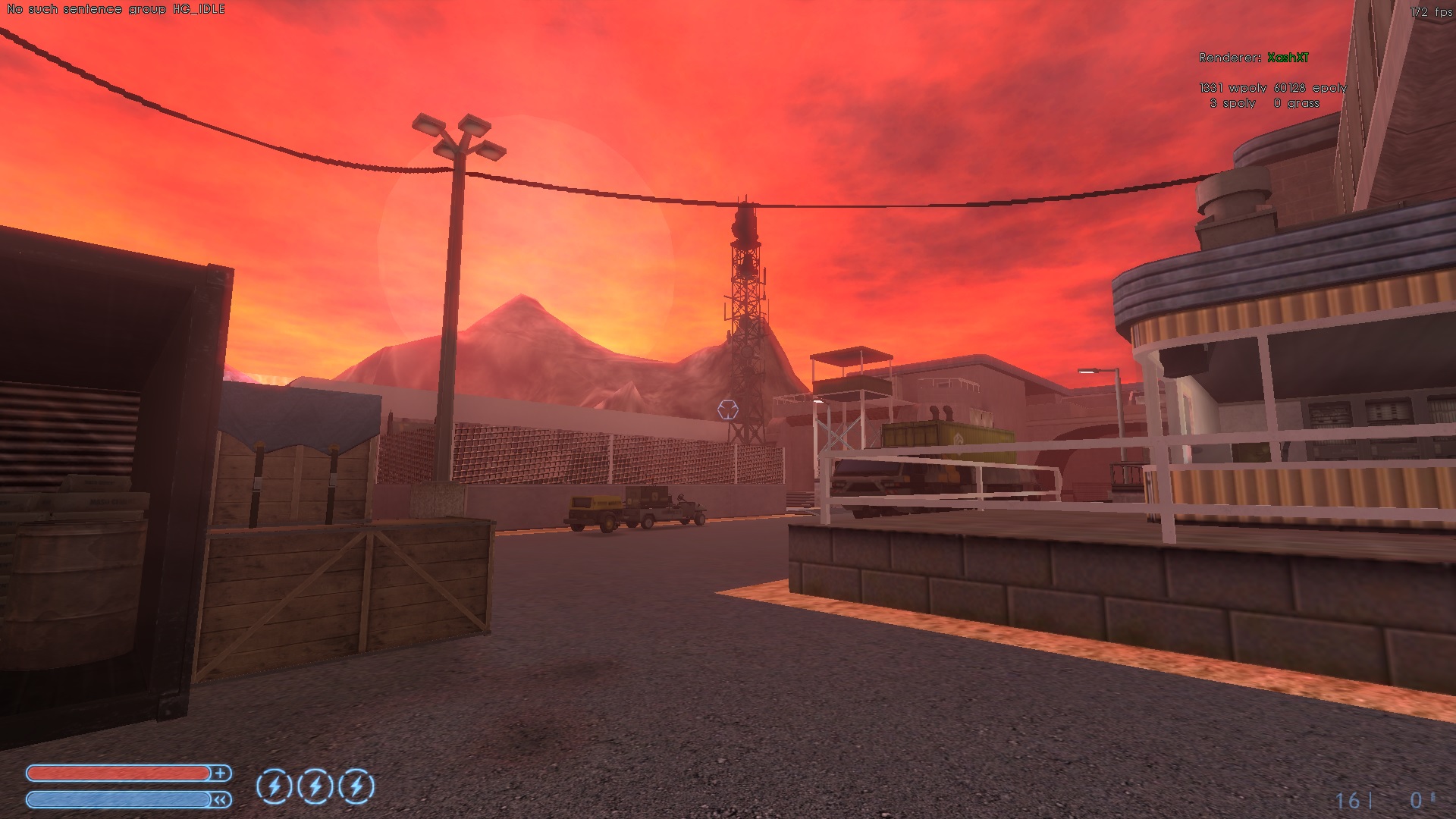 As you can see, I have reworked the HUD, and added a new ability, which you'll be able to get in this chapter if you are lucky :) 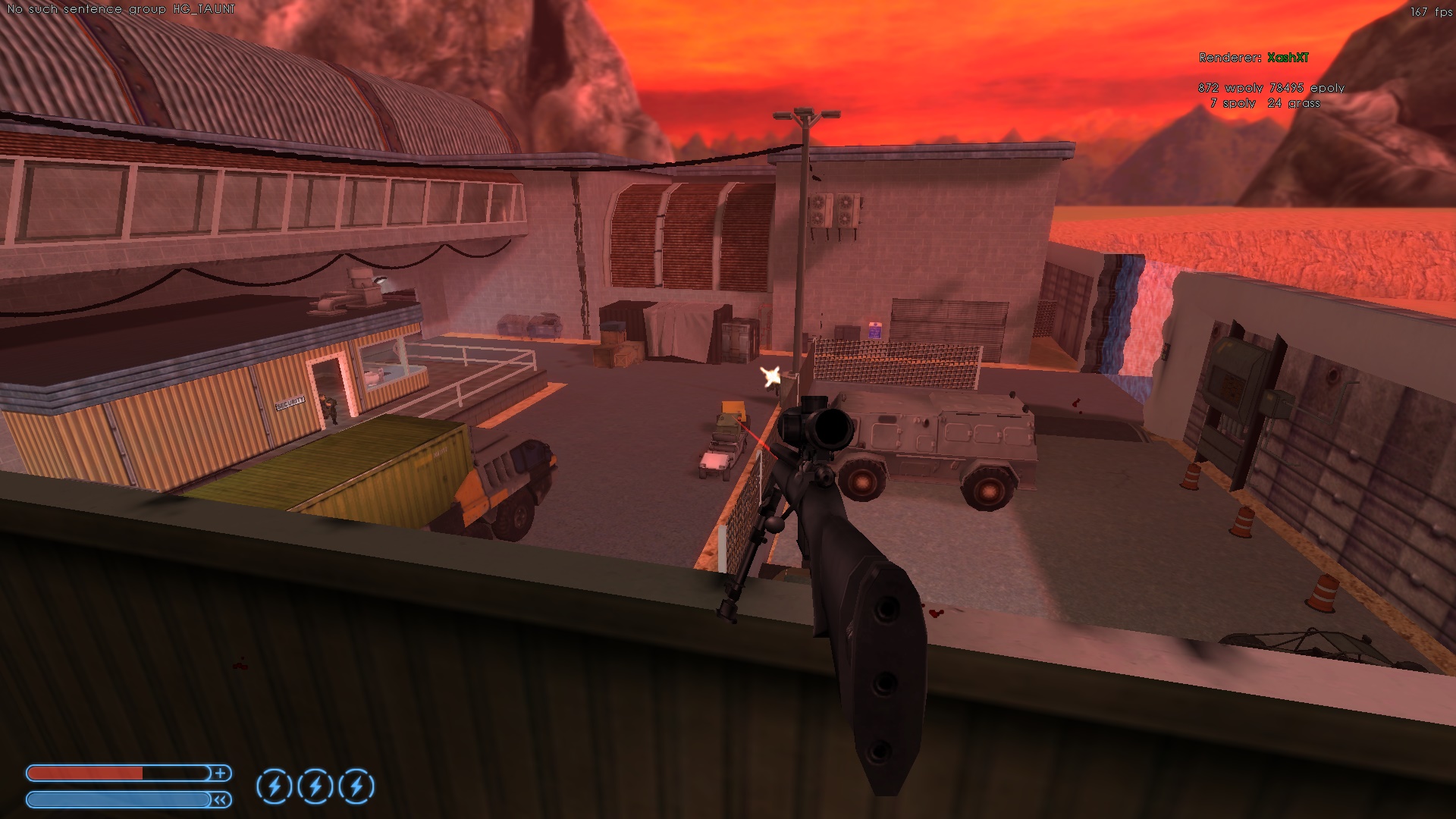 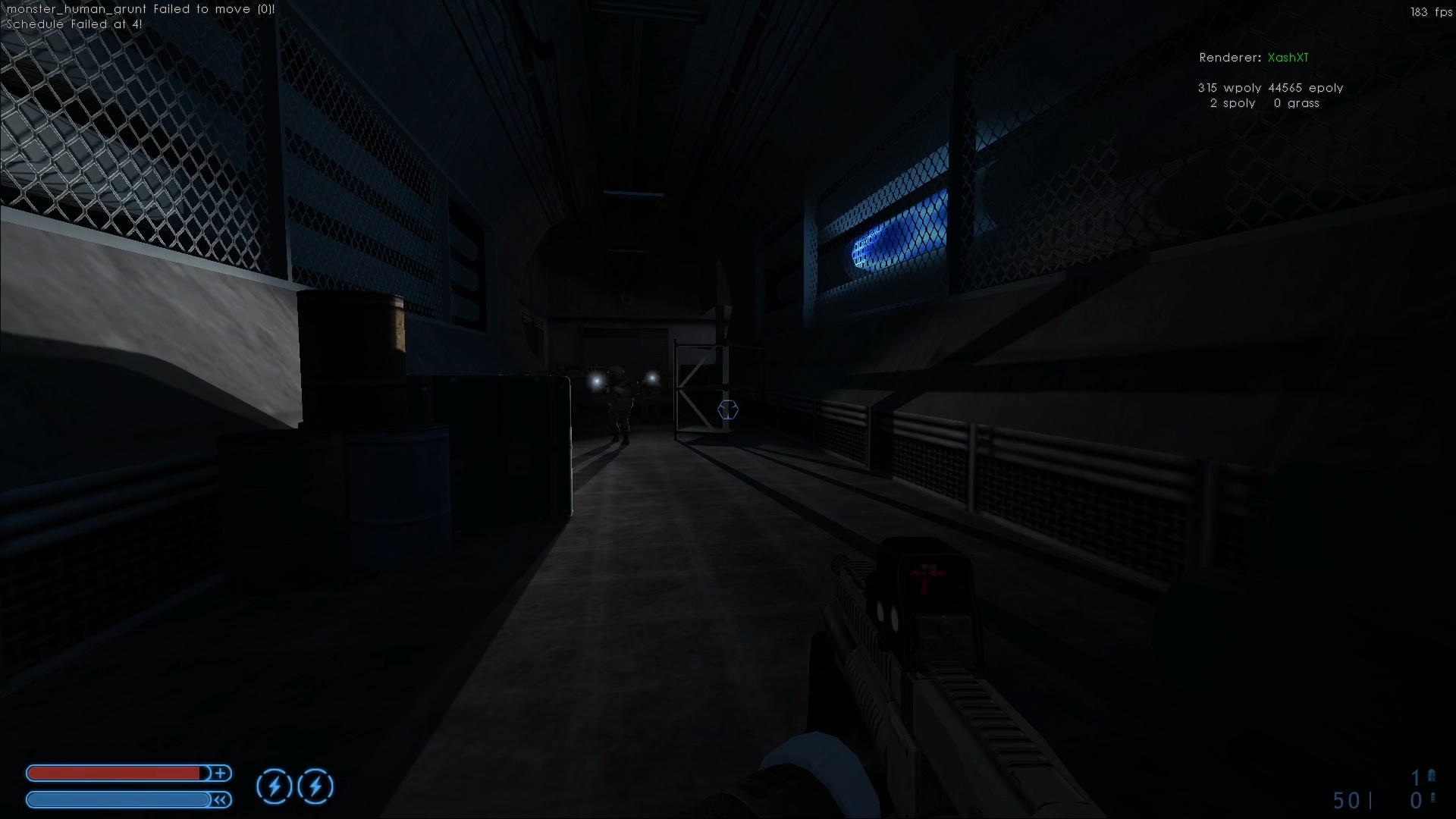 Some soldiers will be having flashlights. The shadows from them are fully dynamic, just like from your own flashlight. Unfortunately, flashlights will be the only occasions where you will see the dynamic shadows (multiplayer included). 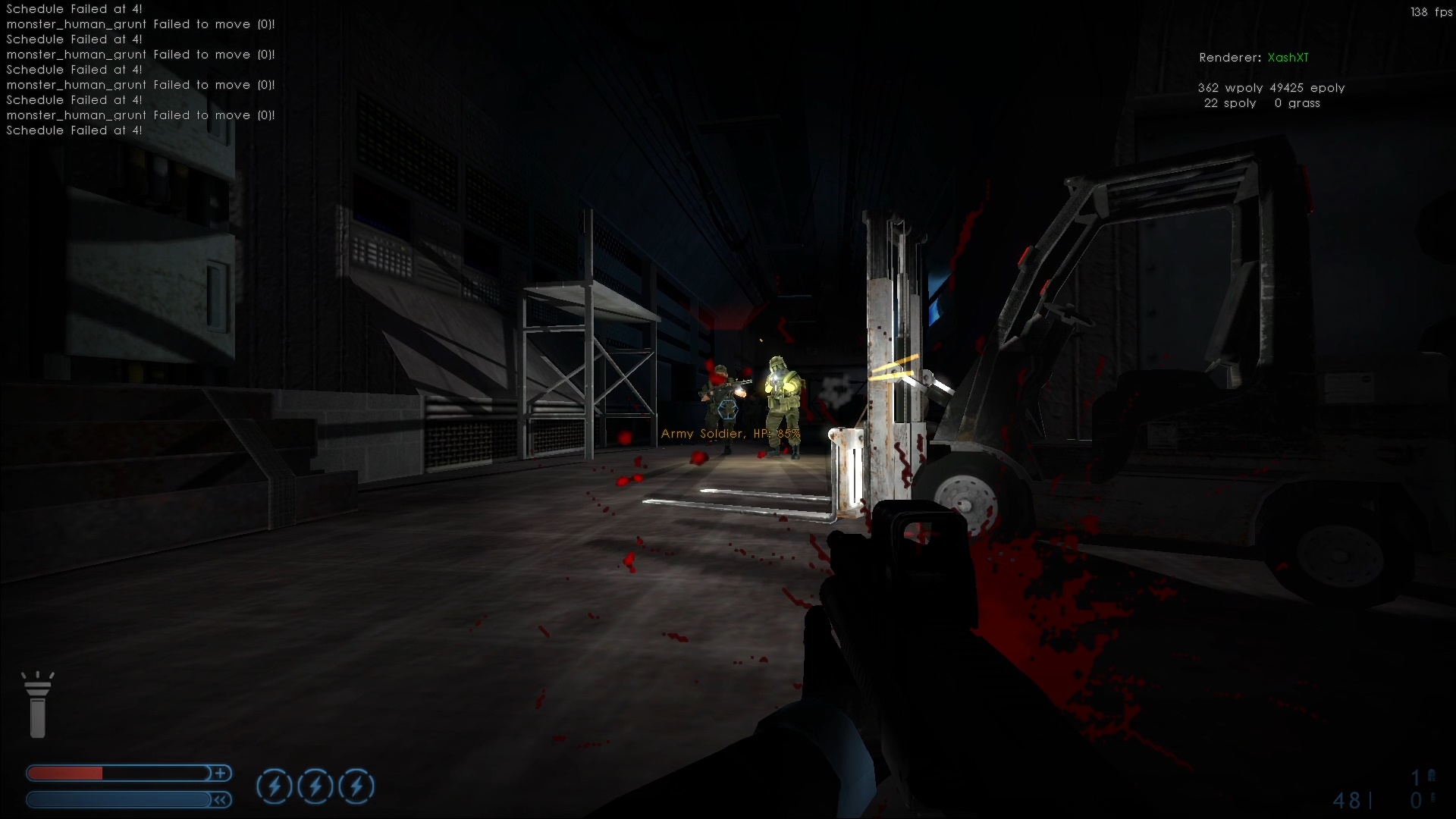 Now, to some features I've added. If you've already been following the page, you've seen some of them, but there's also something new.

Since I use Xash, I have full ability to make custom menu so I made all the options for custom effects. The game won't look as pretty if you disable them but you'll be able to play it well if you'd have performance issues. The menu in general was heavily reworked - adapted to full HD resolution and is fully interactive - this means some menu clicks will change the camera location. As you can see, this small scene is made specifically for video options, so you can see the impact in real time as you switch the buttons, for all effects (except blur, because it's visible only during fast movement). 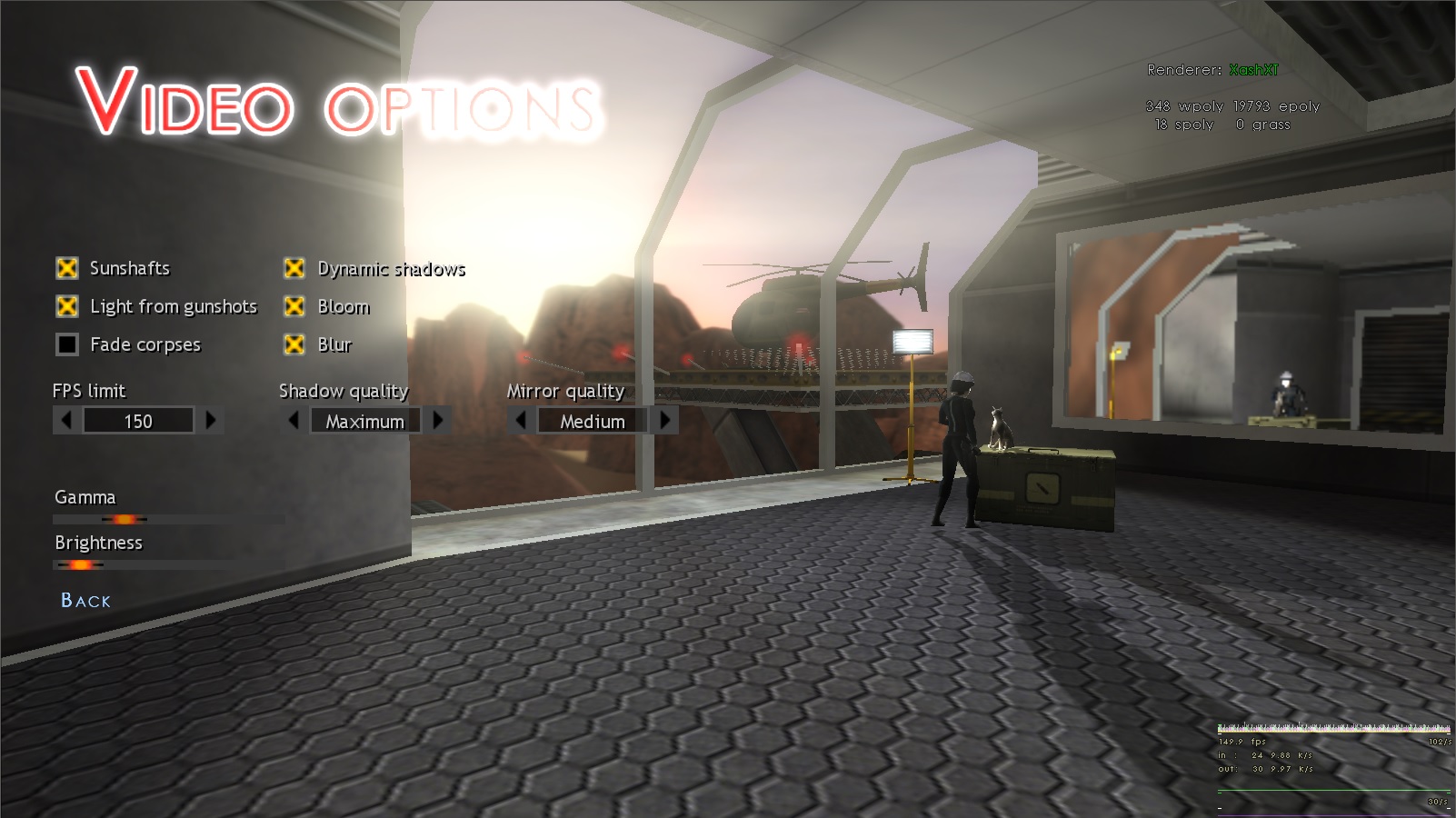 Next feature is monsters reacting to flashlight. Check out the video below to see it in action and how I made it.

Now, the next feature is the same old drone I've shown before, but there were a lot of improvements. 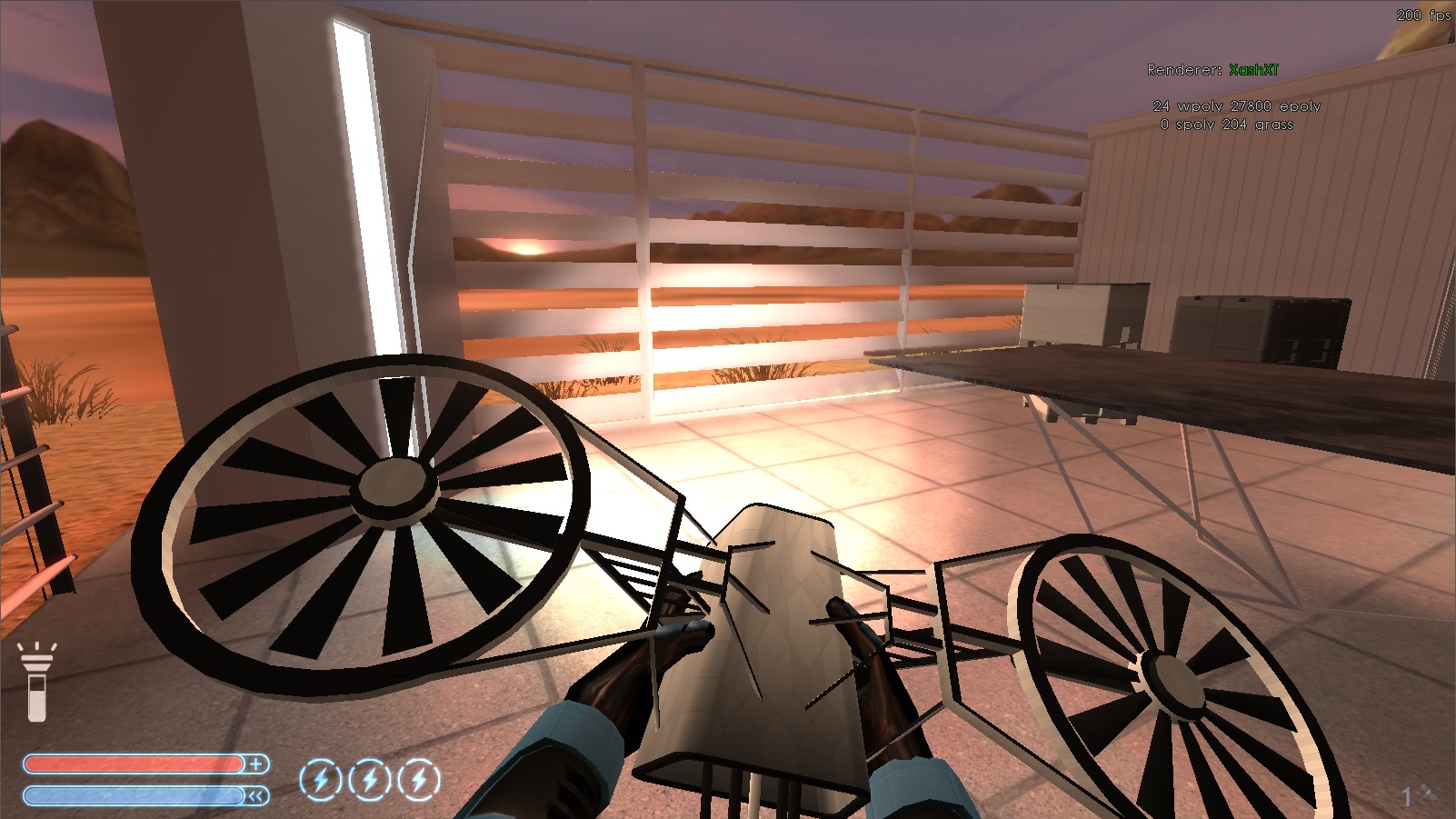 First of all, I have to give credits to the guy, who animated the viewmodel with the drone - SandedSandals, who is the developer of the mod called Half-Life:Trials. He helped me a lot with animating models, and you will be also fighting with a couple of enemies animated by him. Fun fact - the drone itself I made in Jackhammer and converted to model, and then I spent few hours animating the damn blades... So, it was technically made from brushes!
The next improvement I have made - the drone is now controllable. I decided to remove the "self-destruction" feature (it was mostly made as a workaround to get rid of a stuck drone), now the right mouse button will switch the player into the 1st-person mode from the drone. You can fly with WASD and JUMP-DUCK buttons will control the vertical flight. Shooting is done by LMB, and you can instantly get it back to you by RELOAD button. If the drone is flying around you, you can call it to your location using LMB. Drone has 500 hp and 500 bullets. Once bullets are out, it will explode. You can carry only one drone at once.
Here's a video of it in action:

As you know, this mod is primarily single-player. But I've been also preparing the multiplayer mode, it has nothing special - just plain deathmatch - so most of the things I did was to make sure it's playable. Some entities or effects were simply not working in multiplayer as they didn't take other players into account. So that was my goal to fix those little technical things. Also multiplayer showed me a few code mistakes which I would never see in single-player... Here's a video of me playing with my brother. Initially I recorded about 2 hours of video, but there's 25 minutes of some good moments (the map was just a test poligon so don't mind it):

At the release I'm planing to also create a couple of deathmatch maps as well, maybe add more in the future, we'll see. I also added small features like "always gib on death" or spawn-protection and implemented various fixes from BugFixedHL related to some weapons and player code stuff.

Next step, I have made a hard decision to switch Alice's voice to AI voice. Unfortunately, my own voice didn't meet my standards at the end - I have used a lot of plugins to imitiate the female voice (cause I'm a male), but the problem was mostly with pronunciation and emotions. AI surpassed my work in every way. Like it or not, but that's how it will be. New voice of Alice can be heard here:

Some other NPCs will also be having AI voices but my own voice will be still present as well. Right now I will stick to this decision, and when the release day will happen, you guys will be able to try your recordings if you'd ever want to.

And lastly, there were a lot of technical fixes under the hood, as the original XashXT toolkit is not stable, unfortunately. Those were mostly rendering/fps issues.

Now, about the future of the mod. I've decided to come back to five-chapter concept again, instead of four. That doesn't mean new maps or anything, it's just that judging by the playtime of the first chapter (1.5 - 2 hours), the 4th chapter would be way too long as it's at least twice longer... So I decided to divide it into 2 chapters. As for the release date, I can't tell this now unfortunately. Next year seemed possible at first, but as the inspiration varies, now I'm not so sure. It's hard to work without breaks and I realized that I'm still quite far. Either way, it will be finished. This mod was my passion for more than 6 years now, and it started on vanilla Half-Life dlls. Now it has Xash engine, a lot of new code (I never thought in my life that I ever touch that side of modding) and a lot of shiny post-effects, haha.

The mod will be fully standalone (unpack, run .exe and play). For the best performance it will require post-2013 graphics card with full OpenGL support and at least Windows 7 (it seems the mod just doesn't run on XP, unfortunately I don't know the reason).

I know it's a bit too early, but I wish you all happy new year anyway. Take care and stay safe.

End of the year update and future plans

What was done and what will be done in the mod Diffusion.

Diffusion is a Half-Life mod in its own universe, powered by Xash engine.

With each update, the mod only becomes the best, I can't wait for the release.

Hey, it's been months. How's the mod going?

Working on second chapter at the moment. Adding new features, fixing various things in XashXT. Unfortunately I don't know when I finish the mod as the inspiration is not consistent. But it's always going that's for sure :)

Thank you for answering!

this looks so good

This looks amazing! Btw how did you add a background image to this mod page

Thank you.
There's a customize button on your page at the top, there's a css editor.