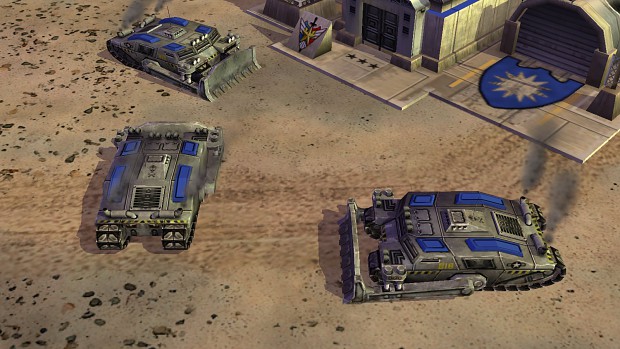 cool, maybe a light machinegun too

No, it will be unfair at the beginning of the game, because the player can kill the workers.

good point, but it could be and upgrade to fend off those pesky players that steal builders to make multiple bases (like me)

Well, they still run them down lol. So it wouldn't make much of a difference. But i agree 100% with kijebe

The word describes it all - Epicness!

They remind me those those American experimental heavy tanks, t-95 or something. Nice work.

Nice...
Now can we look forward to unique dozers/workers for every general? :P

Nothing beats the DIY killdozer.

But this one is also awesome.

At first I thought they weren't appropriate for SW General, but then I realized tougher dozers would make her defensive structure-centric strategy even more powerful. Brilliant idea!

It looks like Batman Vehicle (Batman Begins) with a dozer blade.

Hey! You took many models from ZH without EA's permission.
Why the same model shows completely different effect?
Because your skill is poor and you envy me,so you want
Shame on you！

I've contacted to EA, and you will the defendant in court.Have a good day, scumbag thief.

You libel and attack my mod,you'll have to pay the price for it.

You took how much models from ZH without EA's permission ???
Why you use them?Ask me ?Hahaha !!!

In addition,make and modify models(Your models make from ZH) just a small portion of the Mod's job.
My ZHAF far than your mods in FX Effect,Combat Authenticity and Motion Attributes.
You really can't fair competition.Behind countered is your skills?

Call you "scumbag thief" for counter Shishkinbar's attack before.

Look,your Contra is poor than a "speck".

You so-called "some of the greatest XXX,YYY,ZZZ" cannot compete with me,just one person.

I defeat you as easily as Messi defeat Real Madrid.

GTFO, you're full of sh*t and nobody cares about your crappy mod.

I'm not sure I understand what's happening here...

They see me trollin' they down votin'

Trying to blast this mod they catch me MAD and derpy

He "IS" indeed mad xD

Racking up the negative karma I see.... No matter. Moddb Administrators have been contacted, you will soon be banned from posting on this site.

Don't be boastful!!! yeah many visits your mod page but can you match how many people are playing contra?

^your mod is not there^

when I see that comment I will reply this

what do you mean?

btw starblade7 will soon be banned

W8 are you chinese? ZH is banned from china right?

not a gun but a.... upgrade to demolish buildings but you will get money back. i'ts like selling the buildings

How do you steal stuff from a game your modding?

Yes, there is a similarity. But actually, you will never guess which vehicle was taken as a prototype. It was TOG-2 tank.

That looks like the body of a hummer outfitted with treads and dozer blades. lol

Sleek and simple! Is there a movement speed penalty for that extra armour?

good luck with that

let me point something out tho


PS: could there be a upgrade for a gun or something

not a gun but an upgrade to demolish buildings i'ts and get money back like selling them.

lol everyone hates you

Can you make this dozer and upgrade for though armor but vulnerable from behind?

The Tumbler on crack

Coolest looking dozer ever. Reminds me of the ones on Avatar

New dozers for SW general. They have more armor and HP than the original.