An ambitious total-conversion modification for Relic's award-winning Company of Heroes® franchise, Modern Combat
transports players into the midst of a high-tech war between the current-day Chinese and United States armed forces.
Incorporating all-new factions, units, doctrines, gamemodes, artwork, music and maps, we aim to craft the most
immersive and enjoyable strategic representation of 21st-century combat possible on the PC.
.
Our team has adhered wherever possible to the unique and innovative gameplay mechanics that made Company of
Heroes® the stand-out real-time strategy that it is. Players will need to rely upon a variety of traditional tactics in
order to succeed, whilst at the same time utilising to full effect the highly-advanced weaponry and equipment
employed by the militaries of today. Modern Combat caters to newcomers and veterans alike, and incorporates both
traditional and 'Hardcore' damage systems..
.
.

If you encounter any issues during installation or whilst playing, visit our technical support forum.

If you have any suggestions or wish to provide feedback, please do so via our official balance forum.
.

Just to avoid any confusion from the get-go: yes, it's been over five (!) months since version 1.019 went live... and no, this isn't in regards to a new patch.

There are two reasons for this announcement:

As some of you might already be aware, Modern Combat has now been Greenlit on Steam via the Company of Heroes Mod Initiative, and will soon be downloadable just like any other Steam game (a huge thankyou to SgtConti for setting everything up!).

This will hopefully sort out ~90% of all issues that people report regarding installation, particularly BAT file issues, directory misunderstandings and download interruptions. It will also make Modern Combat accessible to the entire Steam community (and hopefully give the mod's dwindling playerbase a shot in the arm).

There are several major obstacles that need to be addressed before the release can go ahead, but if all goes to plan (which it almost never does) then expect our Steam debut in approximately two weeks! 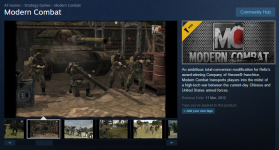 Several times over the past few months I've mentioned a proposed rework of Modern Combat. After many months of personal experimentation behind the scenes, I think it's time to elaborate.

The plan is to create - for all intents and purposes - a Modern Combat v2.0 for CoH1. This rework would involve a complete overhaul of factions, units and doctrines, all with the intent of:

Experimental Air Superiority doctrine (as of five months ago). Read the description for details.

.
However It's currently a solo project, with vital team-members like Darkbladecr inundated at university and DMz and Beefy working tirelessly (not punny?) over at Eastern Front for the past few months. Very little can be done in the realm of 3D modelling and animating until/unless these team-members are able to return.

Nevertheless, should this rework end up going ahead as planned, I'm eager to involve the fans moreso than we did during the initial release of Modern Combat in March 2012. If the community seems interested enough in such a project then I'll upload the current faction design documents for everyone to scrutinise and discuss.

~ Spoon, on behalf of the Modern Combat team.

CoH: Modern Combat re-release v1.019. This re-release does away with the old installer and instead requires manual extraction. It also includes several...

It's been ages since our last update (just over four months to be exact), and we'd like to apologise for the delay in administering some necessary fixes...

New Patch 1.016 with Updater and Launcher!

Hope you are all having a great summer and enjoying the sunshine! We are glad to announce we are releasing our new patch today. We have been working hard...

For those with a 32bit version of Windows you may have noticed that the installer does not work for you. This is now fixed and there are new mirror up...

Version 1.019 of Modern Combat, re-released as a single archive.

This is the selfextractor file for the fullversion 1.000 of CoH: Modern Combat. PLEASE READ THE DESCRIPTION TO FIND LINKS FOR INSTALL GUIDES

Can I play this mod in C.O.H mobile?

No dude, you cant. its for PC only.

can you guys add the terrorist team? like the taliban but put it on both teams

Do you have a new version?

HELLO IT COULD BE THAT I HAVE AN INSTALLATION GUIDE?

can I play this on a non-steam version of C.O.H? and if so how do I install it?

NOTE: The old version of Company of Heroes (v2.602) now is obsolete. The Quazal servers that Relic had been using have been shut down. Thus we, the Modern Combat Team, have transferred our mod to the new version of Company of Heroes (v2.700.2.47) utilising the Steamworks servers. To learn more about the change please read Relic’s community post here.

If you want to install the most recent version of the mod, but only have access to the old 2.602 version of CoH, follow the installation instructions above but be aware that your CoH directory will be different to those given in the examples. An example of a typical v2.602 installation directory would be something like this instead: “C:\Program Files\THQ\Company of Heroes”.