The story is set some years after YR. Soviet Union & Allies are cooperating in space programs and peace finally came to this world. Or have it?
Ex-operatives have stolen secret weapon technologies and demending money. Lot's of money.
Act's of terrorism all across the globe.
Vatican decided to form crusade against this corrupted world. Final crusade to cleance our world.
And finally....
Mysterious women assembling what is left of Yuri's forces under her command. Is this another terrorist organization? No...

271st Tank Brigade was formed shortly before the invasion on USA.
Back then it was equipped with newly designed AR-3 (Alexander Romanov-3) "Rhino" tanks (see "AR-3 Rhino" for more info)
They were in the first wave of invasion and spearheaded the assault on New York, Chicago, L.A. Washington and Norfolk. After the Philadelphia uprising, they started to be called "Bear Brigade", for their tactics.
Main doctrine of the 271st was straighforwarded attack, no hiding. Pure power and armor. And it was quite useful as they ironed with their tank about 1/3 of USA, leaving only burning hulks of their enemies forces.

Turning point occured about one year before the ending of the war, when they were caught in the Texas desert by US airforce. A group of about 40 Harriers II and 100 rocketeers turned 271st Brigade into a scrap metal in an hour or so. Their AA support was later found in the nearest city, having a camp. Commander of AA division was executed for incompetence.
Only 10% of the Bear Brigade survived the assault. Despite the traditional merging with other brigades, all survivors were sent back to motherland, and there, attached to the military and tank schools, where they've rised new generation of tankists.

After the war ended, they were assigned to the ITMO Design Bureau, where they've worked as testers and consultants on newly designed object 640 "Black Raven" tank. As a result they got tough tank, with more than average firepower, and which was more agile than AR-3 or any other old tank.
At the beginning of a new war, 271st Tank Brigade was formed again, consisting of old veterans, and new gifted tankists, rised by them. They were armed with the tanks they helped to developed.
Now they unofficially called "Raven Flock", although they utilize the same strategy as "Bear Brigade" and cary its pride further. 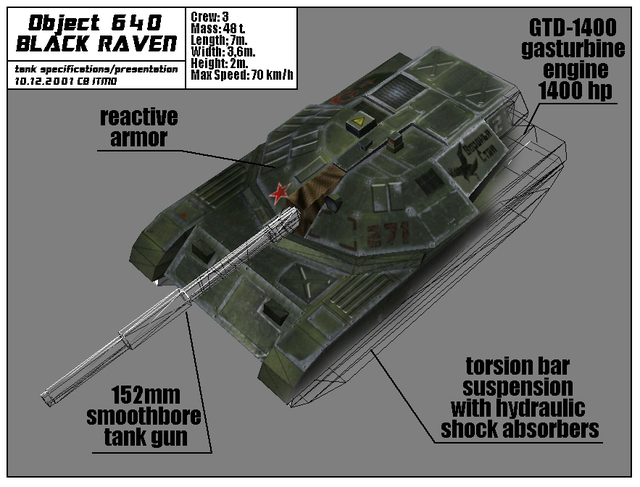 Extreme release, due to my vacation. 1.5 month without that annoying meh around moddb) Take care of yourself and play Vengeance

After almost 3 month of silence, we're finaly get to work again. Lot's of ideas grew in my head. Here i will tell about Soviet Infantry that will be made...

Bad news boys & girls, i have to pause mod development, due to University and other project. Also some news bout next version. More info below.

Some information about next version. Really cool stuff will be.

Extreame release #2. Not much done, but whatever. Refer to readme file inside archive for installation guide. Please leave your comments, they are important...

All the things thats have been done so far. some units are placeholders, some things doesnt works properly. but still its kinda fun. Credits in the Credits...

please do countinue your great work!

I tried to download your 0.03 or extreme beta but the model is not here, nor is not seen ingame.

is this the mod which i can fight with generals and red alert 2 factions at the same time if not then does anyone know any mod like what im telling?

It doesn't seem to work with C&C: The First Decade pack... everytime I launch the game with mod installed, it just throws me back to the First Decade menu. Such a pity... the mod looked so great.

I got it somewhat working by clicking opening the game directly from the folder.