It's here! After 14 months of slacking off, I finally have something worth releasing! Free resolution changing, smooth videos stretching, better multiplayer map support... this patch has it all :)

When I look back at the date of the previous release, it's scary how long this took, especially since it's supposed to be "just" a revision. But looking at the history of the project, the releases called "revision 2" have always been the most stable and complete ones, and in that aspect, I hope 1.06c revision 2 won't disappoint.

So... let's see what's new in this behemoth, shall we?

First of all, the feature that is undoubtedly the Grand Prize in this release: free resolution switching. You thought 1024x768 was too big, and preferred to have 800x600? You thought 1024x768 was too small, and wanted C&C to use every pixel your monitor has, not caring about the fact that causes some funky redrawing errors? Well, either way, good for you, because here it is. 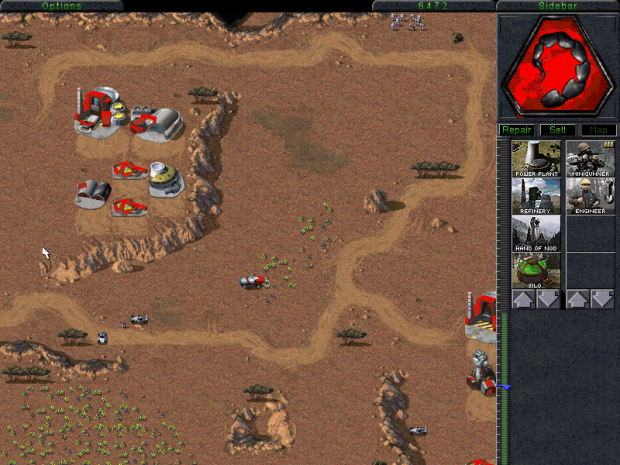 Beautiful, isn't it? You are now completely free to use whatever resolution you want, even if it means you run out of map terrain or sidebar length. The only reasons I didn't allow this from the start were two annoying bugs; one that messed up the sidebar when loading savegames saved in a different width, the other crashing the game when trying to indicate on the radar screen how you were looking at more terrain than the map contained.

With both of these out of the way, you can load any savegame and play in the most retardedly huge resolutions you want. I warned you about the redrawing errors and running out of sidebar, though. 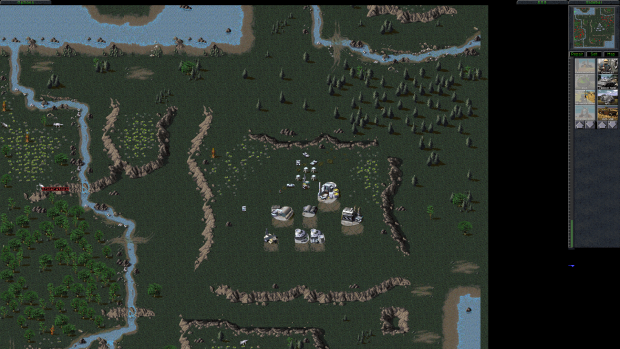 This could act slightly odd. Don't say I didn't warn you :p

On to Big Selling Point #2 (yeah, as if I'm making any money from this). Ever since I found the option to increase the maximum amount of players in multiplayer games from 4 to 6, I found it my duty to open up this possibility. However, this turned out to be a cursed gift, since any map with less than 6 starting positions would act as if it still had 6, and when randomly distributing players over its "6" starting points, those who ended up on the nonexisting ones got a starting point derived from some value randomly left behind in memory. To make it even worse, one of these values was somehow always a duplicate of one of the other starting points.

So, I fixed it. The game now detects how many players each map supports, and lowers the internal "maximum amount of players" value to suit the map. If more players had already joined before selecting the more player-limited map, the host won't be able to start, getting a nice message box kindly informing him to kick someone out first. 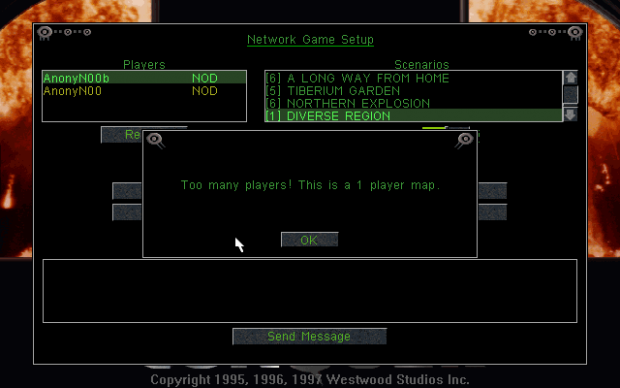 Yes, this was a test. One-player multiplayer maps shouldn't exist

On top of this, the game now plays a beep to inform you when you receive a message in multiplayer, to make sure you don't miss any. These messages tend to be quite unnoticeable depending on the background terrain.

Allright, so, surely we're getting to smaller details now? Nope. Enter Awesomeness Number Three. Besides "AI That Builds Bases" (which you won't get, ever, it's impossible, shut up about it), this was the most requested feature I've ever gotten.

The black lines in the videos. They're GONE. And for added hi-res awesomeness, the CnC-DDraw addon dll that hifi made can stretch them to fullscreen too now. And it's not just for videos. It also works on score screens, map selection screens, the start-of-campaign side selection screen, and on that neat ion cannon ending thingy for Nod. 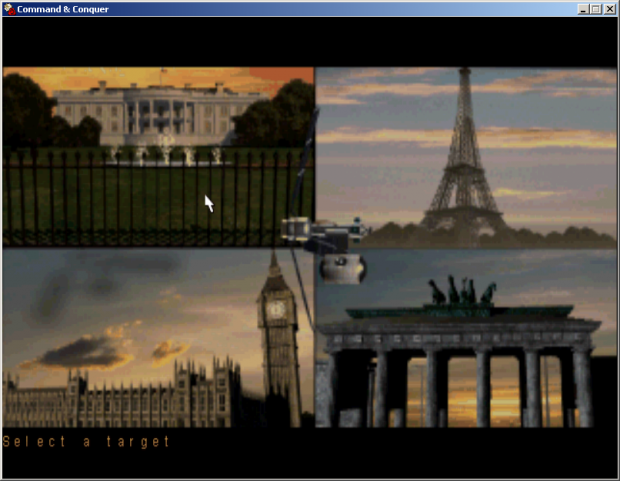 Still not enough? Okay, here's more. CnC-DDraw also offers windowed mode, and [Ctrl]+S as screenshot shortcut. And on top of the game's own resolution switching, CnC-DDraw can stretch the game to a custom resolution. This allowed me to add a neat function in the new configuration tool that gives you the original DOS C&C aspect ratio, aka How It Was Meant To Be Seen.

Well, I guess that's about it for the cool stuff. Almost. There's one other nice thing which I kinda already mentioned; the configuration tool. Say goodbye to the old CCSetup, and hello to the new CCConfig. This Filename Change Is Brought To You By The Windows 7 Compatibility Team! which is apparently convinced that any program that's in any way called "setup", and which does not write install information to the registry, must be a malfunctioning installer, no matter how much win7-specific exe information you put in it to tell Windows it's not an installer at all.

So, ahem, yes, CCConfig. I already wrote a lengthy article about it, that's quite outdated now, but still semi-relevant. This tool contains every single useful option that's in the game configuration file and in the CnC-DDraw configuration file, combined for your convenience. Change resolutions, game language, video stretching options, the mission start music preference, or your multiplayer nickname, all in one tool. 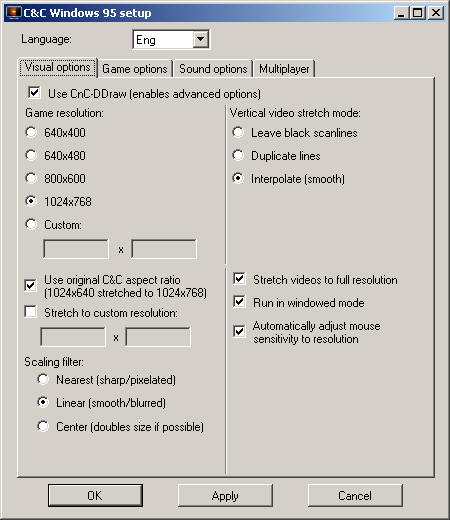 And yes, now, sadly, we're onto smaller (but no less awesome) details:

I guess that's it then. Make sure to carefully read the license, it explicitly denies you the right to whine about the patch. More constructively formulated criticism is always welcome, either here in the comments, or at my forum.

Sweet! Always been a fan of this patch.

As for the zoom in fix, I always liked the Zoom in feature because it showed the terrain epically. However, it being on by default was annoying.

Does this work Command and Conquer Gold Edition?

That's the ONLY version this patch works on. (Yes, TFD uses the Gold Edition too)

I have many questions:
1. If I put XP Patch does it work with this mod and the LAN will work?
2. Can I use Hamachi, Tunngle and other to play this online?

1. "the xp patch" Westwood released for C&C95 was a dirty hotfix that disabled the game's LAN function completely. It's been outdated for ages. This patch should not be combined with other patches; it contains everything you should need.

2. Yes, you can. But it's not needed. The included cncnet.exe in the game folder will let you play online without needing any external tools. If your opponents have 1.06c r2 as well, and start the game through cncnet.exe too, you'll simply see them appear in the LAN lobby :)
You can visit the CnCNet homepage for more info, and a link to their chat room, where you can meet other players: Cncnet.org

Fantastic :) Thank you soooo much for all the work you've been putting into this!

Why didn't you create a shortcut for multiplayer through the CnCNet.exe as well? There weren't really any instructions on using it and if new players don't see the option immediately they probably won't try it out.

I kinda... forgot, sorry. Had a lot on my mind with the release -_-
Also, only the full install pack makes desktop icons anyway; the patch doesn't, since it assumes you already got the game installed, desktop icons and all.
And that install options list is already pretty full with the resolution choice thingy.