A summary of the changes that went into the content patch for CnC: Final War. Highlights include new defensive structures, the new navies, and bug fixes and balance updates.

Hi everyone, SMxReaver here with another Developer's Blog. Today, we'll be talking about the upcoming c hanges coming in CnC: Final War 1.0b. There are several points to highlight, and we will follow the 1.0b Changelog's formatting in discussing these changes. We'll cover the new client updates, new gameplay features, bugfixes and balance changes, and show off one of the new maps as well. Without further ado, let's begin!

The first aspect have been client updates. Starkku has provided an updated build of the client software with bug fixes and internal improvements, as well as new features such as extra chat lobby commands. AlexB of the Ares project has provided a version 2.0 of the powerful Ares modding tool, and even allowed for the use of the custom hacks he created for Final Alert 2 which will allow players to use the map editor with greater ease now. Finally, some skirmish and multiplayer options were updated for the new naval combat additions that were brought to the project. These include a custom map filter for naval-enabled maps and a toggle for disabling the naval features altogether. 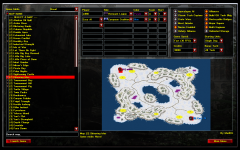 The second aspect have been the new gameplay features, most of which are what held the release of this patch up. The return of naval combat was a huge addition for the mod, adding a new factory and 5 to 6 units for each faction to wage war across many seas. The client was given extra support for the naval additions as mentioned above, and maps were added and tested to provide fun naval-focused battles. 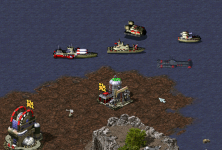 In addition, players also received updates to their defensive options, with the return of Battle Bunkers as well as the Eastern Empire's Hellstorm Cannon and the Remnant Legion's Thumper Emplacement. These new powerful defenses are T3 unlocks that mirror the European Coalition's Grand Cannons, sharing their build limit of two as well.

Battle Bunkers for All!

Finally, the Remnant Legion saw many updates to their arsenals through new artwork for their Barracks, gaining access to the Hand of the Legion hero vehicle, and their air armada have seen a rework to allow them greater power and versatility while maintaining their roles on the battlefield. 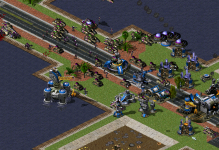 The Legion stampeding over their foes.

The third aspect of the project have been bug fixes and balance updates, many of which were reported by the players here at ModDB as well as some reported in Discord. Units such as the Vulture Gunship for the Okhrana saw a total rework to fix their weapon problems, or the Aurora Platform which was moved the Coalition Crusaders faction and replaced with the Icarus Array to increase the reliability of European Coalition artillery. Others saw just visual updates, such as the Eastern Empire Mobile Refinery as seen below. 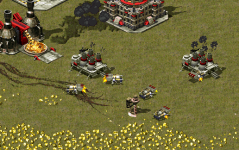 As I wrap up this Developer's Blog, I'd like to showcase a new map featured in CnC: Final War and one that will be seen in greater variety. I'd like to introduce AroTech to the mod lore, a gladiatorial entertainment company that runs combat simulations in their specialized underground combat arenas utilizing various battlefield setups. These maps are tight close quarter affairs, designed to promote intense "in your face" combat. 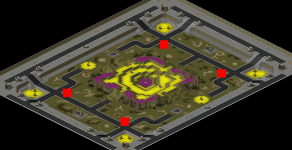 Enjoy the newest version of CnC: Final War, 1.0b! It's now available for download both as an automatic update via the mod client or as a manual download in the downloads section! Have a wonderful holidays, I'll see everyone in 2019 with singleplayer and co-operative updates!