The goal of this mod is to make combat look more realistic while maintaining balance by adjusting squad cost and training speed. To determine how strong a unit or weapon is I consider how its described in the lore, how it looks ingame and its relative strength on the tabletop. Most units do not use squad or vehicle cap, and the few that are limited have a lore reason (like the leman russ vanquisher) or balance reason (artillery). - No squad limits on most units. - Dozens of new units. - The AI can use all the new units. - New AI profiles for all factions. - Campaign and multiplayer compatible. - Greater emphasis on macro-management and aggressive gameplay. - Knockdown is now very rare. - Better vehicle pathfinding. - Research removed. Each races traits are more pronounced, space marines are more elite, eldar are faster, imperial guard and orks are big horde armies, necrons are hard to kill but slow, tau still like their gunlines.

What this mod does, a detailed summary and explanation.

What you see is what you get

Weapons do the same amount of damage regardless of what unit is carrying them. A heavy bolter carried by a space marine is the same as a heavy bolter on a leman russ. Explosive weapon aoe matches the visible blast that it causes. Weapons with multiple barrels multiply their damage by the number of barrels they have. ie twin linked lascannons do twice as much damage as one lascannon, storm bolters do twice as much damage as a regular bolter and so on.

Weapons that fire one shot at a time (plasma guns, autocannons etc.) should always fire in sync with the damage they deal. ←- still a work in progress

Pistols do not suffer an accuracy penalty when moving. 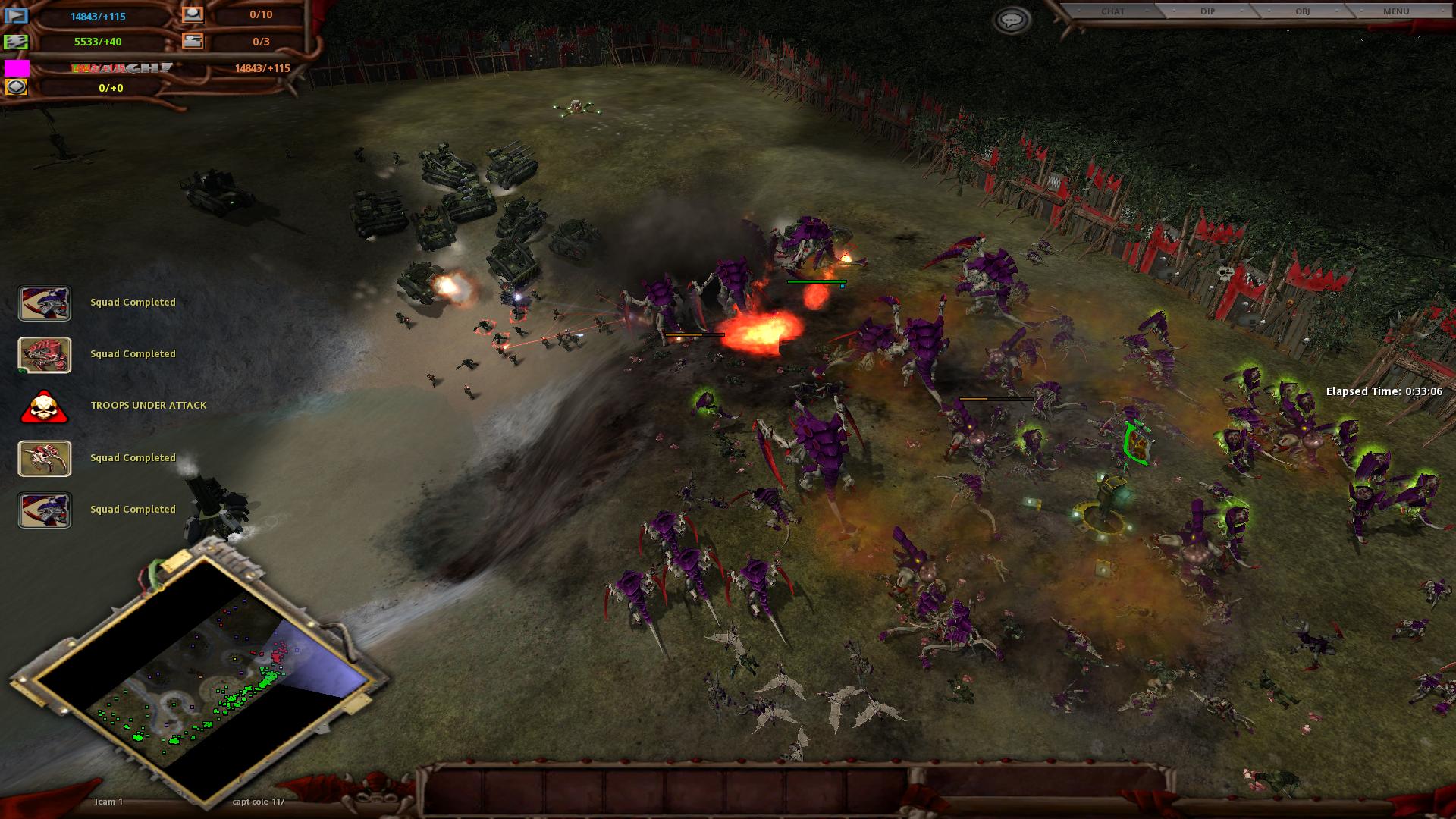 No unit caps (on most units)

Most units don’t use squad or vehicle cap or have any limits on how many can be built. There are a few that do for balance or lore reasons, such as superheavy tanks and lost tech like the leman russ vanquisher.

Reductions in training time allow rapid army building from a single infantry and vehicle building. This increases the pace of the game and prevents the ai units from getting stuck. All research now requires the player to make a choice between limited options, any research that doesn't has been removed. Together these changes make teching up and building a large army much faster.

Over 50+ Community made maps included

Armor works in a logical and consistent way

Only units that are actually invisible in the lore have infiltration. At the moment these are the tau stealthsuit and necron wraith. All units and turrets have a detection range of ten meters.

Units no can longer regenerate while in combat, but the time it takes infantry to fully heal has been greatly reduced.

Official GW and Forgeworld units only

Much less stop and go movement, tanks reach full speed and stop nearly instantly. The monolith now moves like a hovercraft and doesn't have to come to a stop to turn. 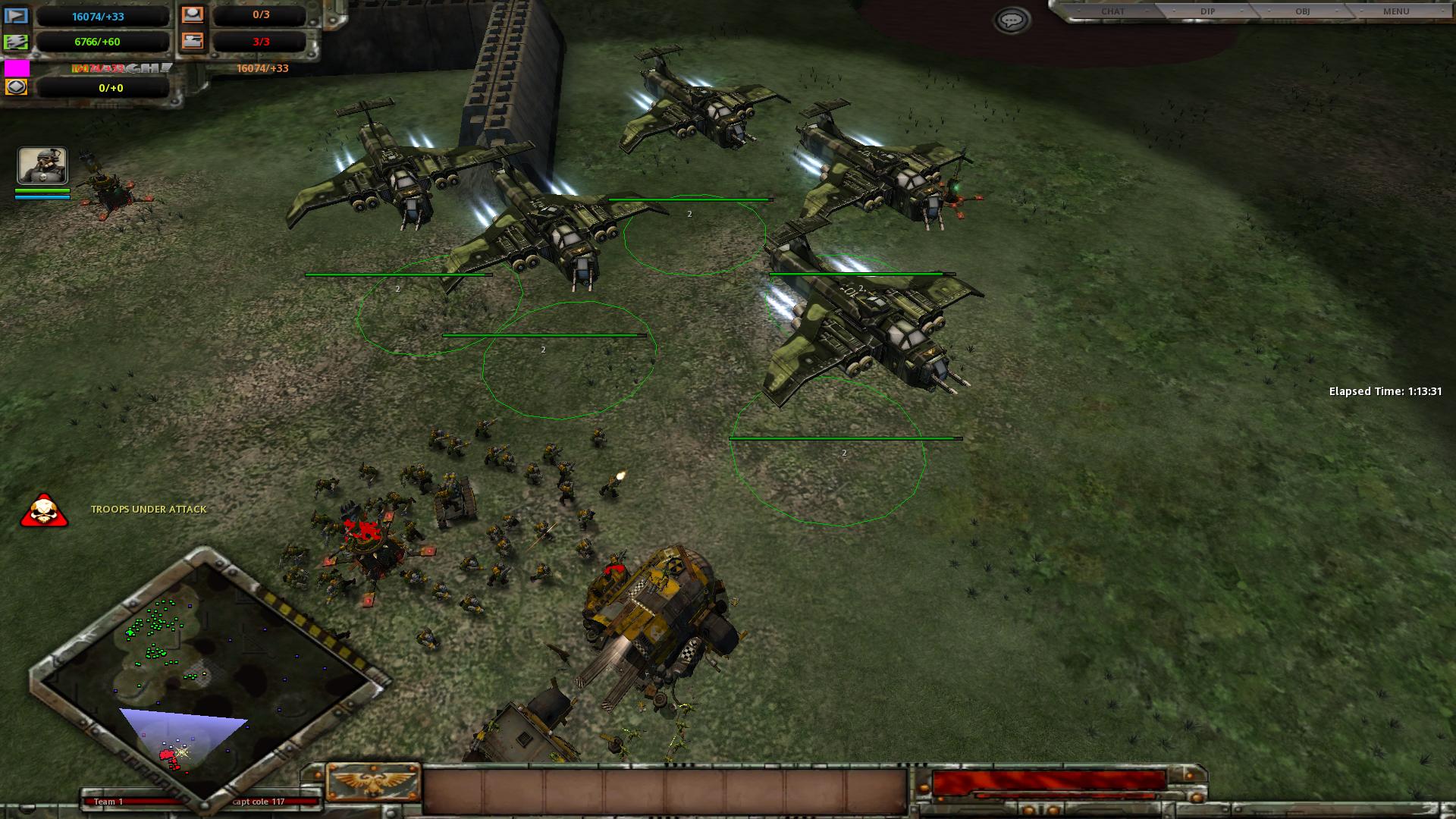 Aircraft have global jump range and instant jump recharge. Some of them can drop bombs on units they fly over. They have all been scaled up and given crash animations.

Greatly reduced fog on all maps.

Now you can see artillery blasts far off in the distance. 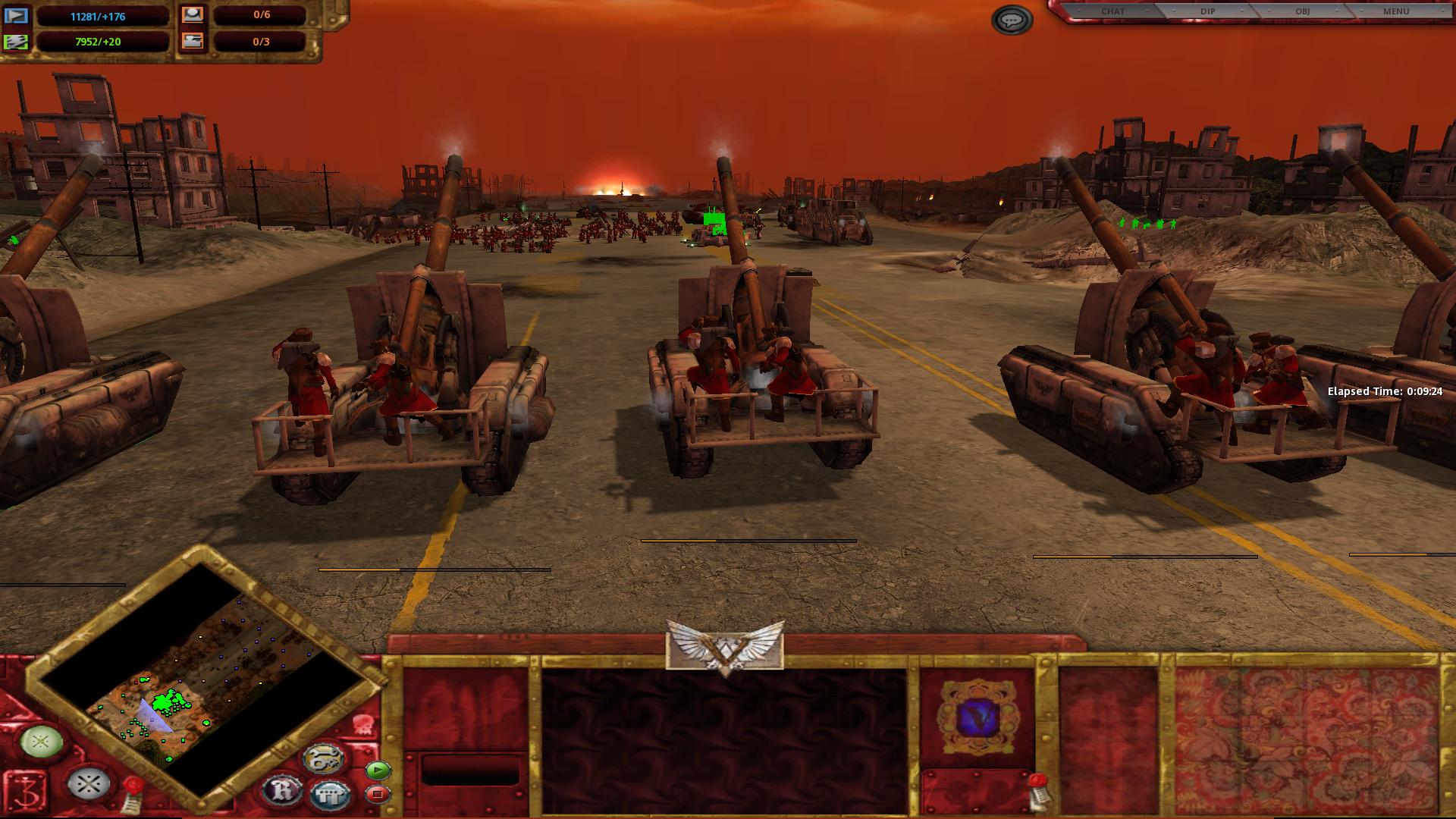 Turrets and listening posts have above average hitpoints.

Basilisks have global range but are the most fragile heavy artillery.

No more free intel from the radar scan.

Weapons are slightly better then their imperial counterparts.

All infantry (except wraithguard) got +50% speed.

Turrets and listening posts have below average hitpoints, but can be concealed by the webway portal.

Their hovertanks can fly across the map at extreme speed, but their fragility is not forgiving of micro mistakes.

No longer have moral.

Gauss weapons do full damage regardless of armor type, have shorter then average range but above average damage.

Lack conventional transports but all infantry (not just warriors) can now teleport to friendly buildings.

Monoliths now have global jump range. Combined with the above, monoliths are more dangerous then ever.

The orbital relay and barracks (now called the first company barracks) have switched positions in the tech tree. The orbital relay is more expensive then other races barracks to compensate for the mobility it provides.

Terminators are great against buildings in melee and can teleport back to their barracks, great for surgical strikes like in the lore.

Now get access to all units regardless of what doctrine they choose.

Railguns now have their own fx.

Can consume corpses for resources.

The hive tyrant and swarmlord now have access to their 8th editon physic powers via research.