Calradia Reimagined is a mod focused around a complete reconstruction and redirection of the original Warband world.

With features such as entirely new factions, troop trees and units, this mod can ensure that the familiarity of Calradia does not become mundane; refreshing the world we all know and love.

Calradia Reimagined also contains many other mods, minimods and improvements; including graphics and sound enhancements, weapon and armour packs, even entirely new game mechanics such as advanced diplomacy, recruitment improvements and naval trade, combat and exploration.
Our full mod-list is in a .txt file in the mod zip, feel free to take a peek at it.

We have worked extremely hard on ensuring that the mod be as good as possible, and we hope you enjoy playing it as much as we enjoyed making it!

The Swizt States: A collection of city states run by various nobles and lords, the Swizt favor extremely heavy infantry and slow but reliable crossbowmen. Their cavalry leaves much to be desired but the defensive capabilities of their Elite Pikemen means their armies can form a living, armored fortress. The Swizt can be found in the tundras and mountains of the north.

The Hondic Hordes: After years of living as nomads, the horse masters of the Hondic Hordes have finally settled in the eastern steppes of the world. They have almost no foot troop presence, except for their steppe infantry, who perform fairly as both footmen and archers. The Hondic people instead rely on their horsemen, comprised of fast and deadly raiders and outriders, facing the Hondic Hordes in open ground is madness.

The Rymor Republic: Formerly occupied by the Kingdom of Anglior, the Rymor broke away and formed their own army perfectly suited to combating their old masters. Their skilled spearmen and legionnaires can defend themselves from any ranged attack, before engaging in melee combat with deadly efficiency. Their archers and cavalry are both of medium prowess, better suited to breaking up enemy formations, allowing the infantry to clean up. The Republic can be located in the mountains on the south east coast of the Kingdom of Anglior.

The Merchant Kingdoms of Sudnaw: Founded by powerful merchants and funded directly from their coffers, Sudnaw mixes traditional coastal warfare with modern military power. Her brutal axe-wielding infantry are resilient and dangerous, and her famous pistol and cutlass wielding mounted cuirassier can devastate an unprepared enemy. Her crossbowmen leave much to be desired however, and play a meager supporting role, supressing enemy advances. The Kingdom of Sudnaw lays on the western coast, making the most of the natural bays and headlands to conduct her shipping trade.

The Aryomir Emirates: Only recently appearing in the far-eastern desert, the Aryomir Emirates are a myriad of sun-worshiping peoples with a strict religious hierarchy. The Aryomir are known for keeping quiet, but their wrath is deadly; many an army has fallen before their heavy camels, fast archers and their legendary sacred spearmen. The Aryomir pride themselves on the beauty of their weaponry and armour. Their shields are particularly well decorated. The main Aryomir weakness is a lack of dedicated archer units; though many of their troops are equipped with ranged capability, it is not until the end of their upgrade trees that fully-fledged archers will appear.

The Mini-factions are small parties of warriors and soldiers who roam the lands of the various factions, raiding, growing and building fortresses for themselves. Some major factions may even hire the local mini-factions to fight for them. The Mini-factions are:
The Saxe Raiders: Axe throwing warriors in the lands of Anglior.
The Alod Armies: Hordes of medium horsemen and infantry in the tundra of the Swizt.
The Shaak Tribes: Fast and fanatical tribes of infantry in the Hondic steppes.
The Gruul Hordes: Barbaric infantry who plague the Rymor mountains.
The Debouin Slavers: Dangerous, camel riding slavers from the Uttornam Desert.
The Galatian Warriors: Historic troops famed for their javelins on the Sudnaw/Swizt borders.
The Sudnish Corsairs: Deadly smugglers who raid the coasts of Sudnaw
The Peasant Rebels: Generally displeased farmers who wander the entire world.

The Gedric Knights: Strong and clever cavalrymen, representing the heaviest mounted forces in Calradia. Their Strength comes at a high price.

The Company of the Cross: Widely skilled infantrymen with the fastest crossbows the world has to offer. Often found being paid to hunt bandits and hostile warbands by lords and nobles. Their loyalty is cheaper to buy than any other mercenary company.

The Iron Hilt: Heavily armoured and well disciplined footmen that can take a beating and hand it back out. The Iron Hilt are the preferred escorts of many caravaneers. Their services are costly, but cheaper than those of the Gedric. The Iron Hilt are also renowned glory seekers, and will often fight in tournaments.

The Ashyagar: Mysterious mercenaries from unknown lands, the Ashyagar adopt fighting styles different to any other, but fight extremely well in close combat. The only way to acquire an Ashyagar is for a Shaak to train to their peak ability.

The Loyal Company: A mercenary company only available to the player. They can be purchased from a travelling recruiter who will appear in random taverns, and though pricey, they are completely customisable. This means they can fill virtually any role, and will still upgrade and perform as well as any other soldier. It is rumoured that the most skilled marksmen amongst the Loyal can be granted advanced weaponry only comparable to that used by Sudnish Curassiers.

A lot of time and effort has been put into this mod. It makes me very happy to know how many people have played and enjoyed it. We always try to be responsive to feedback and comments, and we hope you will download and enjoy the mod. Please leave us a review if you enjoyed Calradia Reimagined, as they will help us spread to even more people. Thank you for reading and playing!

Video courtesy of TheNeborhod, just shows some of the changes. These videos are from PRERELEASE, so they contain almost none of the content in Full Release!

Hey everybody, this is ChokeOnAPear and I've finally decided to back down and request some help. Calradia Reimagined has been a solo project since day 1, and though there have been contributions by other, nothing has been game-changing. However, I've decided if I'm to keep up with my workload I need some assistance, and I need a scener... 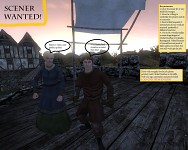 If you are interested, please read the requirements in the image and follow the instructions also in said image. I hope to hear from you soon!

Calradia Reimagined is about to roll onto Moddb and I'm happy to announce that it's been an honour to work on the mod for all you guys out there. This...

So everyone, I've been working hard on the mod and it's safe to say we should see a release very soon! I'm off from college for a couple of weeks so I...

So everyone, mod progress is going well, but slowly. I don't have much free time these days, and when I do, I can't always bring myself to do work on...

So, the mod remains alive, as do I. However, recently progress has been extremely slowed due to me applying to university and studying for mock exams...

Just a patch to iron out a few bugs and properly add in the Company of the Cross. Also increases the number of corsairs found on ships in the western...

This is it, our first full version. It contains hundreds of new features, new characters and items. I would give a full changelog, but it'd be too long...

This is just a simple upload to keep up Calradia Reimagined spirit. This mod is simply a .txt document containing 8 of the special weapons found withing...

This patch is mostly balancing and some minor fixes, but does include a new unit to strengthen the Swizt States a bit; the Swizt Arbalestier. Installation...

This mod is amazing! I love the addition of historically accurate armors along with the new troop trees and faction names. And man, the music ties everything off extremely well! This might be the only mod I've found yet that competes against my favorite Warband mod, Floris. Thanks a lot for this masterpiece of a mod

this mod is dead or still working

welp I've poked my head back into this mod a few times over the past several months and I've seen no evidence that it will get any better, I'd have to officially call this mod dead, no one else should waste there time here, i certainly won't be any longer, which sucks because i held this mod as number 1 on my list for a good long time but what can you do, I wash my hands of it

Hey man,i have one bug,when I try to talk with one of the heroes in the tavern,the dialogue is totally distorded,can you help me?This mod is Awesome,I really like this mod.Sorry for my bad english,I'm Brazillian.

your english is fine.

AMAZINGLY HIGH POTENTIAL!!! Only thing that ruined this mod for me were these things... Clipping through horse 2 different musics playing at the same time very wierd camera and can't turn character game said has staged a comeback! there was a party called 's party and when he came to me he was apparently the minister? That's it but this mod still has amazing potential and i really hope it is not dead, carry on working hard and iron out the bugs and this will even rival things like phantasy calradia…