Mod is developing by Russian team but will support English language. I will be glad to see translations on the languages instead of English. We are thanking the autors of the OSP's that are used in this module, the list of them is under that text. If you don't like the using of your OSP in that module, you are able to write about that. You can place that mod everywhere, just place a link to a homepage on commando.com.ua in the text. 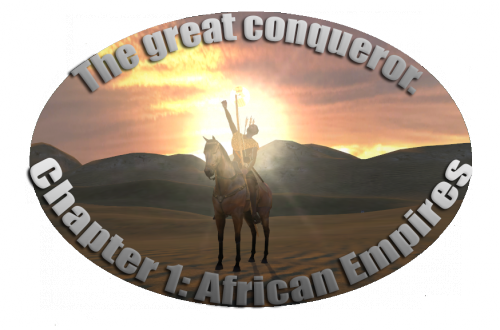 The great conqueror. Chapter 1: African Empires
ABOUT DEVELOPING AND OUR PLANS

The idea of creating of this module originated in 2009. "The Great Conqueror" is a modification about the struggle for power between the great empires and the young nations at the end of the XVIth century.
The mod's main idea is a historical demonstraatoin of the wars and warriors of the XVIth century. That was the age when medieval knights, musketeers and the naked savages were able to fight in one battle. Map will be enlarged in the next versions of the module and will make it possible to player to visit Europe, Southern, Central and Eastern Asia and America. The autor of the module wants t show those parts of his creation: Chapter 1: African empires - Africa, Chapter 2: Domination in Europe - Europe, Chapter 3: New World - America, Chapter 4: Allah Wariors - Central Asia, Chapter 5: Great Dragon - Eastern Asia (Far East), Chapter 6: Lord of the South-east - South-East Asia.

This topic shows you the first part of the module, called "Chapter 1: African empires". It takes place in 1582 and demonstrates you African countries.

Version 0.4 Added Italian states. Significantly expanded map of the cities of the Ottoman Empire and the Spanish Empire. Optimization of models is carried...

can you update forward the mod, or you are dead to do it

Any info on the next chapter?

Only the author himself decides to release the new version of the modification. I can not tell any terms, not even approximately. If he give me the next version, I'll upload it immediately.

You think you could make a victorian era version of this mod?:)

i look forward to play all chapters

This looks and sounds GREAT! I hope the're will be multiple options as religion, town/state settings, special units of every nation/tribe. I'm downloading it and waiting for more!

I have uploaded the 0.4 version. Added Italian States. The map of the cities of Spanish and Ottoman Empires became much larger. The models were optimized. We Fixed bugs of previous versions. Some old locations are temporary removed from the game to give us an ability to restore them. Futher more, our team has grown and some new OSP's has been added now. I will edit the full list in several days.

Just so you know I really appreciate this mod, its been far too long I been yearning for a game that is historically accurate and in Africa!!!
Only one thing the City of Benin has a game breaking bug. When you attempt to enter the "lords hall" or castle it crashes the game and shuts down. Please,Please release a fix!!!!