Call of the Kings

Call of the Kings is a Mount and Blade overhaul, it takes the player to the early age of the gunpowder in Calradia

This mod originaly started off as a little project to add new items and troops for my own entertainment, but I decided to release it under the name of "Native Enhancement", but after a couple of updates, I decided to change the name to "Call of the Kings" since it was becoming a little more than just an enhancement.

- Kingdom of Swadia - Based on Renaissance period Germany and Spain, their most notable troops are the Carabineers (mounted gunners), Longbowmen (long range skirmishers), Knights (heavy cavalry) and Champions (heavy infantry). The best stategy to use with these troops is to slowly advance forwards as your longbowmen rain hell down on your enemies, and then finish them off with a musket volley at close quarters - or - run them down with your heavy cavalry and carabineers.

- Kingdom of Rhodoks - Based on high-medieval period Italy, their most notable troops are their Armored Sergeants (heavy pikemen clad in mail), Pavise Crossbowmen (medium range crossbowmen that have large Pavise shields) and Musketeers (close range gunners). The best strategy with the Rhodoks is to hold the line and wait out your enemies, soon they will charge - or - have your swordsmen charge the enemy lines as your pavise crossbowmen snipe them from afar.

- Kingdom of Vaegirs - Based on the early-medieval russia, their most notable troops are their Knights (heavy cavalry wearing kuyak armor), Hussars (medium shock cavalry), Birdiche Infantry (heavy shock infantry) and their Archers (long range skirmishers). The most effective tactics to use with the Vaegirs is to chase your enemies down whilst your archers thin out their numbers from behind the line.

- Kingdom of Nords - Based on viking-age Denmark, they field the Huscarl (heavy shock infantry), Warriors (medium shock infantry) and Horsemen (light shock cavalry best used as cannon fodder). The most effective tactics with the nords is obviously charge at them - or - you order your men to form a shield wall around your archers and wait until the enemy numbers are thinned out enough to finish the battle with a single charge.

- Khergit Khanate - Based on early-medieval mongolia, they have the Khergit Guard (heavy shock cavalry), Master Horse Archers (light horse archers) and Master Bowmen (long range defensive archers). The best tactic would be to charge the enemy in a single horde whilst your bowmen keep your flank covered.

- Sarranid Sultanate - Based on early-medieval age Egypt, they have the Mamlukes (heavy shock cavalry), Mamluke Archers (heavy horse archers) and Guards (heavy infantry). An effective tactic with the Sarranid troops would be to order your men to assault the enemy head on to weaken them and have your horse archers surround the enemy, and then order your cavalry to charge finishing off any survivors.

- Kingdom of Castillio - Based on age of sail Spain and France, this advanced and ambitious nation of merchants, inventors and explorers are the main users and creators of firearms. Their soldiers are skilled duellists and grizzled adventurers, their notable troops are the Blademaster (Light infantry), the Castilla Company Guard (Light pikemen with pistols) and the Castilla Company Musketeer (Unique elite musketeers), their light and heavy infantry make for great shock inf., but their pikemen and musketeers can be used in a pike-shot formation.

Videos:
I am now accepting donations, these will help me continue creating mods for you guys!


If you have any issues or suggestions, post in the forums so they won't be buried.

Here is my addendum to the last update.

This project is no longer being put on hold, I intend to continue it along side Nordland and Myth of a Legacy. I fixed the issue that was causing me much frustration, and I have the drive to continue now.

I've done much work on the "Kingdom of Castillio", I have also replaced all of the existing firearm meshes with preferable alternatives, thanks to the With Fire and Sword team. 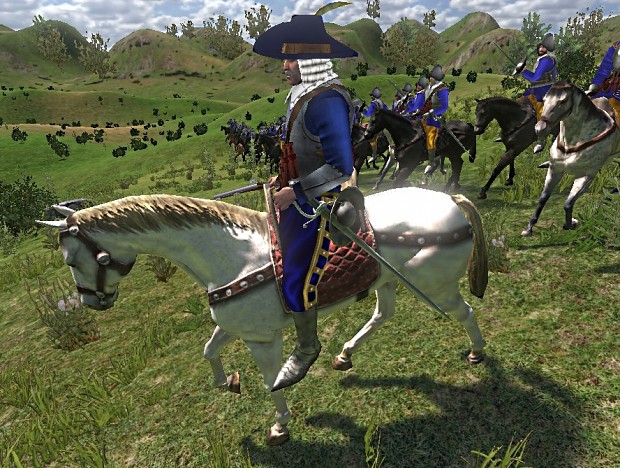 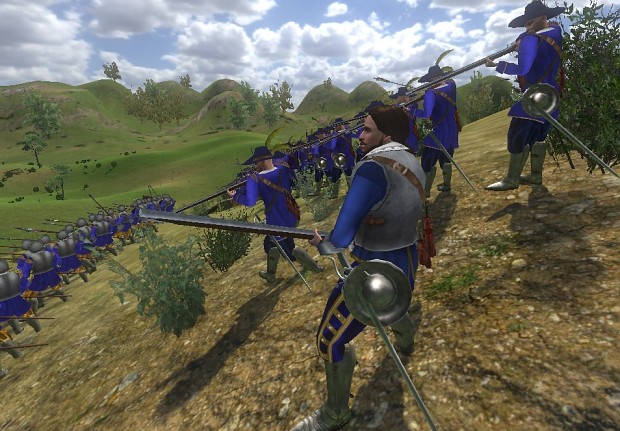 As you may have seen from the Crownhill level I intend to make unique scenes for the Ghoradul towns, but sadly the amount of time it takes to make these...

Just a quick update on a few things related to development!

Credits for the resources used in this project, read if you are interested!

Call of the Kings 1.6. Check the description for the change-log. -WARNING- not save game compatible -WARNING-

Call of the Kings Epic Music Add-On was put together by CenturionTaz! There is no list of songs yet, sadly, I didn't get the chance to put it in the .TXT...

The Music add-on for Call of the Kings, made by CenturionTaz! All the music in this add-on was not created by us, all credit goes to the original creators...

Newest updated version, check changelog for all the newest additions, fixes and credits.

This is merely a quick fix for a glitch that has been bugging me, so note this still requires patch 1.3.3 for a fully patched game. Check the change-log...

Includes Battlesizer. Check the Instructions + Changelog for changes to the game.

i wish that he would add a status update about him abandoning this and, maybe release the files of the latest version which is incomplete just so they are out there

Hey, I just started playing this. Very nice mod, and I really love the music since im a metal head :D

Oh, and is there a list of the music in game? I recognize some songs(FALKENBACH **** YEAH BATHORY **** YEAH!), but some of them I dont, but im enjoying them

what version of warband is this made for

Nords are for pussies :D

A lot of things to say about this mod
1. The soundtrack really doesn't fits mob it is really bad don't like it :/
2. First i was disappointed cause i fought it was again a stupid mod like just the native with little tweaks thank it isn't ( i noticed the graduals on the 10 fay lol the where attacking swadia :D)
3.THE UNITS ARE ******* AWESOME the look MUCH MUCH better ( and btw what f is the shield of swadian inf SO SMALL like the seize of my head
4. One of the companions Arogon ( who's father is murded) that dark armor damn dude just 7500 debars and i am immortal u guys should not put him in the game or just lwer the armor of him 200 is just too much.

BUT STILL ONE OF THE BEST MODS IN TIMES THAT IVE PLAYED!!!

For anyone who plays this mod or is about to,Rhodocks are overpowered.Their swordsmen are O.P especially the ''Rhodock Plated Champion''it's level is higher than any unit in nearly the whole game.

Sounds interesting! This still in development?

Nope, I abandoned it to work on other projects.

Call of the Kings Development Team

I know how hard it is to make a mod, to add units, items and all of it. I think that he has done a pretty nice job improving the game and wish not so many people would be so hard on the mod team.

Single Player
Tags
Embed Buttons
Link to Call of the Kings by selecting a button and using the embed code provided more...