"THERE WERE THOSE WHO BELIEVED..."

That life here began out there, far across the universe, with tribes of humans... who even now fight to survive somewhere amongst the stars... And there are those who still believe!

This mod page was founded in 2017. For years it's been relatively dormant, but the time for that has changed. It's goal is to bring the original Battlestar Galactica universe to the FoC game. I hope to present to the player gameplay like they've never seen in EAW. The focus of the mod in the short term will be on the single player scripted story mode depicting the events of the Saga of a Star world. The far goal, is to have an interactive galactic conquest map with over 50 new planets. The conquest would take place over five eras: Hassari Conflict, Great Cylon Conflict, Thousand Yahren War, the Exodus, and Cylon Civil War. Advancement through eras would take place upon the capture of certain planets and the completion of certain objectives. The unit list is rather limited right now, but to compensate for that I have tried to pack as much mechanics as I have been able to devise. Look out for small pictures and and video releases highlighting these new gameplay changes. 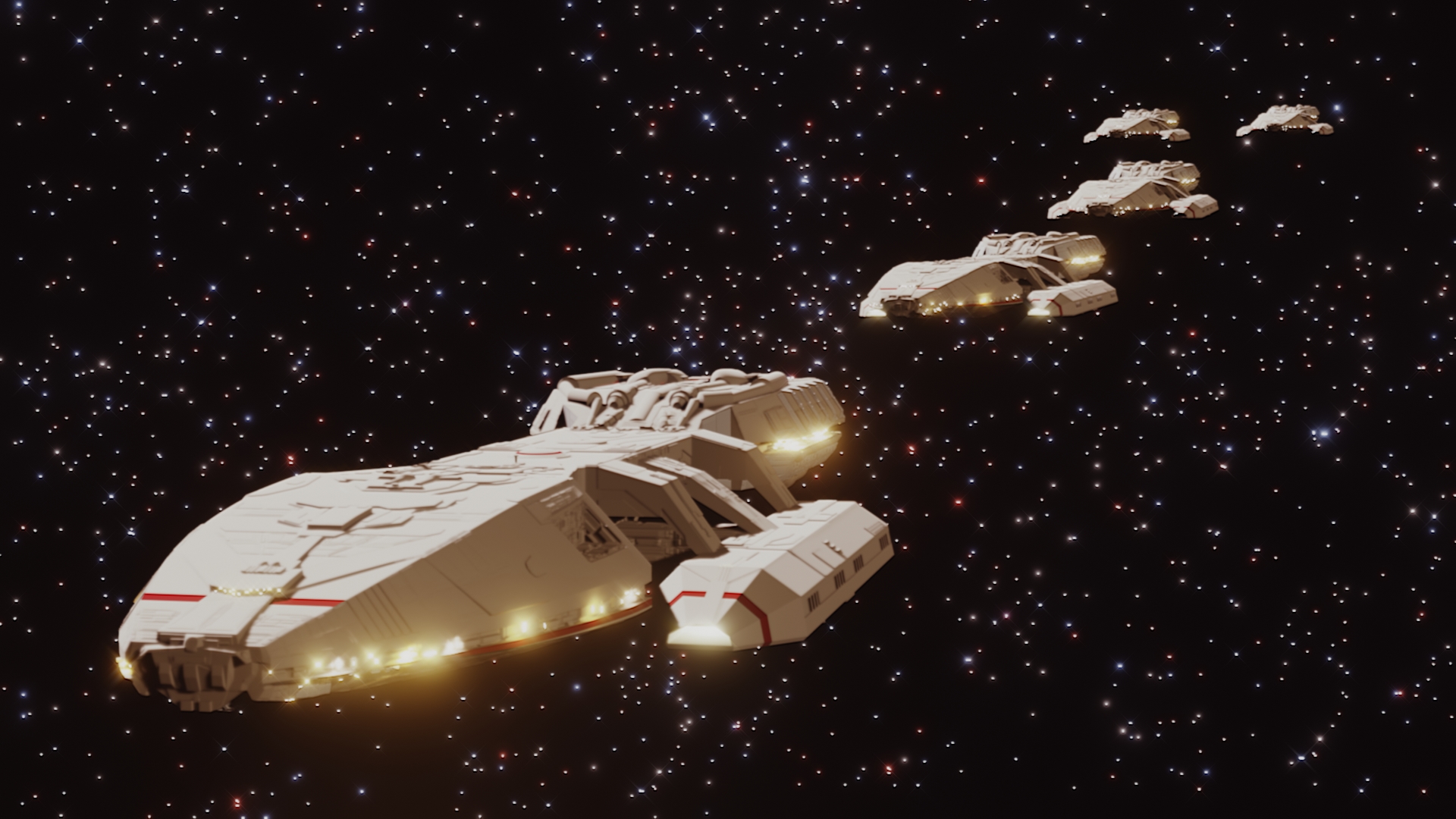 First I owe an apology. I don't mean to tease with these cool looking images, I just think they look cool and hype me up for what potentially could be really great. I just hope whoever is following the mod feels the same way.

I've decided the best way to move forward with the mod is simply to scale down the scope for the first release. At first, I wanted 5 eras, a full set of ships for each faction for each era with a multi era story driven sandbox GC. It's taken me this long to realize it, but that scope is just too large for me to handle. I do really want to make a story driven mod, and I feel that now the best way to do it is to focus on just one era, that will essentially be a recreation of the TV series in game form. That is a goal I believe I can accomplish. The mod won't have the most ships, or skirmish balance, or maybe even a playable ground battle, but I am going to commit myself to actually producing content instead of using the lack of content as an excuse to not do anything.

Writing it down so I have a contract to hold myself too.
By February 2022, I will have a release of the mod that encompasses the events of part 1 and 2 of Saga of a Star World.

Completing the mod is still a dream I have. I'll get there someday.

preview of some work I've been doing lately. updates like this will come as soon as I think I have something worth showing.

just a quick blurb, I've decided to work on this project again, this time with more experience and ability to get the job done.

Back in the swing of things

Hey guys, been awhile since my last update. Just wanted to let you know the mod isn't dead.

I must admit I am impressed... Can't wait to play it when it's done!

Posting an informal update down here. Sorry I didn't deliver what i said i would in the most recent post. All is going well however. Things are really starting to come together irl for me, so time for modding is finding it's own little time slot. I've done a lot of work on the mod recently and it looks pretty good, but sadly not in playable state as of yet. I'm posting updates in the discord BSG modding server for the original war of the colonies mod, so you can check out my progress there.
I like righting the articles, but for whatever reason it's the images that get the most views on this page so I'll try posting more of those.

I was wondering what was going on with this mod, glad to hear you're still working on it, but life comes first. I love classic TOS Battlestar and always wondered what a TOS Battlestar mod would look like in Battlefront 2 actually one day (as I mod that), but I've been looking into getting into EAW modding. This is very impressive what you're doing, so I'll have to join the Discord. So definitely keep up the great work.

I too have been on a hiatus with the Designated Days mod for Battlefront 2, also for real life issues, but recently came back, so I definitely understand. Love what you're doing!

Thanks for the kind words! Lately I've been getting a lot of inspiration from the BSG Deadlock game. The caveat here, is I haven't actually played Deadlock, so instead of copying exact mechanics, I'm trying to capture the general feel. There is a lot of room in the TOS for me to put my own spin on things and still be faithful to the show.
If you know anyone that does stuff like voice acting or sound work from the BF2 community that's something that I could really use at the moment :D

Pretty underrated mod! will keep my eye on!

Hi, I'm just commenting to let you know there are people still patiently looking forward to this mod's release. :) Personally, I don't mind waiting for a few more years - good things take time, after all.

It's hard to believe i published this page when i was still in HS XD
I may start updating this page again now that i know people are looking forward to this.
I'm doing a lot of work with my other mod ARM, hashing out systems i'm going to use for this mod.

Any updates please, I know this must be hard to do solo and wish I could help you; but sadly, I'm just an old gamer who doesn't have much 3D/Coding talent.
Really looking forward to this promising mod!

Good thing i checked back here. MODB doesn't do a good job of giving updates.
I'm slowing building up my modding expertise. I'm started up a lot of work behind the scenes. My main bottleneck is that i hate producing content (3d models and such), so while i am working out mechanics i still need to find someone who can make ship models.

Not dead, just very slow going. I'm only myself on the mod and things haven't been ideal lately.

Sorry about that. My computer broke down in late 2018... Just got a new one. I think I can be of assistance now.