What to do list.
Note: Some of these changes haven't been aplied in the latest update. All changes will be aplied in the next update v1.1
General:
[Complited]
2) Add atleast custom 3 new maps (SinglePlayer, MulitPlayer and CO-OP).
3) Complitly change the in-game sounds.
[Not Complited] Yet changed to make water maps.
[Complited]
6) Make MulitPlayer>Internet>Account option possible to function (For online playing. We'll take a deeper look at that, since I've seen a lot of options in the guieditor).

Buildings:
1) Towers should get a bigger attack priority by units (So that the units don't ignore the towers as much as they do now).
2) [Complited] [Ai Unit Priority Added]

GUI:
1) Add custom avatar in creat profile (There should be an image of some of the game heroes, and then u can choose your avatar.)
2) Make CGameEditor more compatible with everyone (If we manage to do this, everyone will be able to understand the gameeditor and can make maps, edit props, make new entities and so on).
3) Change the game logo 'The Fate of Hellas'. [Changed into AW:S Logo]
4) [Complited

Requests & Questions: [Here I'll add ur requests & questions that u want in the mod, or have an idea but u can't really tell what u want (Don't worry, I get that a lot... Like 'Hey make a pink map'... (The biggest problem is, that I actualy made the pink map -.-')Note: I won't help u out with my older mods (And by that I mean 'Indians in Skirmish'). I did find a way how to make the AI move, and how to build fortifications, yet I lost the file. All I know is that the prob is in strategys. I'd recommend open the folders and look around, u might find something that I didn't. But I'm don't with it.]
1) Make a map for this mod myb? - Well it's done I guess (Didn't make one though, just made it playable.)
2) Add 'Pets' or something? - Done! [Note: There are only two heroes right now that have pets. Everyone will get it ofc, but before that I want u to test the two that we have before I place the rest in the mod.]
3) Computer-Player using a hero. - That's kinda a hardcore work in progress [So basicly this isn't just strategy, it's trigger aswell + ab_ai_control (which is not working as it should, for some reason).]
4) Make the heroes so that each one of them have a counter. - Half-Way Done. [Note: In this update Gidarnus is brought back from CWorksmanshipAbility to CHeroAbility, which means... no more of that obelisk. Now he has skills of his own.]
5) Is it online playable? if not... MAKE IT! - RIIIGGGGHHHHTTTT... The game is not playable with it's own... How to put this... The new update of the game (1.4), disabled it... or that's what I've seen so far. [Note: I heard u can use 'GameRanger' but I haven't tried. If u don't mind players, I'll leave it to u... untill I found another solution to this]
6) Can u add items, so that we can buy for some boosts or something - Well... I can "TRY", but I can promise anything [Note: There is a selling item sistem in this game (I hope u've noticed that u can sell items in ur inventory if u have more then enough). So I could make it on park of that sistem, but that would take a lot of time. Why? Well I first need to "learn" how to use it (It's not my game people, I'm trying my best tho). Then I'll have to make a shop (Which is easy, but adding to sell items is another story). I'll be honest... I'm 7% Optimistic about this item sistem, so don't have ur hopes up (Sorry).]
7) I saw Elephants in the background of the new map... but I didn't see any on the actual map - Saw the cleared space behind the indian barracks? Well that's where all thoes things were suppost to be. Elephants will be pets/sige-units.
8) Can I get a custom hero that has my name on it, I saw u did it for a guy named "Tarik"? - Yup, Just give me ur name and I'll add u as a part of the mod. [Note: If u have privacy issues like: "I don't want to give u my name, u might come and kill me" (Which has happend people, not to me tho), Just leave me ur nickname.]
9) When will the mod be in Alpha state? - When it's playable to everyones liking.

My Questions to u (Players/Testers/Friends)
- Should I remove the 'Kill' Command?
- Should I remove the Patrol Command and add a command swap to page [That's like when u click on the lvl up and it opens another page of the there skills that u have, so I though something like that for the item sistem, yet as I said... not seeing it happen.]
- Should we remove the Melee damaging the range penalty? [One of the testers said something about that, it's possible to remove it, yet I think it's an important aspect of the game.]
- Make Shields less OverPowered? [This topic came up, when a tester attacked with a tenk an archer, the archer didn't stand a chance. The tester kinda didn't feel happy about it, even though he won.]
- Adding Siege Units and Equipment? [If u ask me, this is too much... Yet the tester that wanted the pink map, liked the idea... and 'YOU'?]
- Anti-Alising Official Added? [It makes the game look more HD, but it'll make ur game performe at a lower fps rate]

There are more stuf to be done then this, but this is all I can think of that we need to do next. There are even more complex things, but these aren't really a laughing matter. 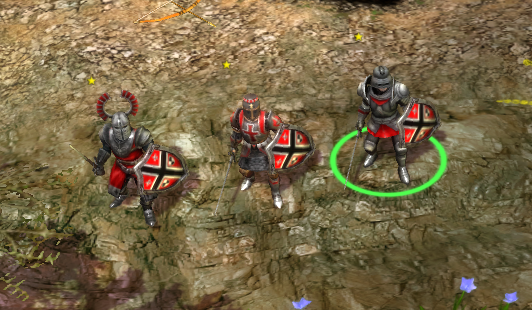 We finally were able to get those "old" Golden Horde models into our mod. That basically means, you can expect some new crusader units and special gameplay for The Golden Horde factions ofc.
Hence why we gonna delay the next update with the redone romans.
So, basically in the upcoming update you will get fully implemented romans, crusaders, russians and mongolians! What an update, right?

So, we hope that you can wait a little bit longer for an even more devastating update!


That news should not push the full implementation of the romans into the shades! There was a lot of rethinking and even more retexturing done on them. Though, we don't want to spoil too much here, they really got their own unique gameplay behaviour, that is not similiar to any other faction.

If you want to get more WIP shots or just want to join people that you can play multiplayer with, feel free to join our Discord Server:

We wish you all the best and take care everybody! Looking forward to play with you!

Something new coming up soon

I'm posting this article to talk about something new.

So I've manage to open TheGoldenHorde, and... well... there should be a lot of new things added soon.

We're working on it

I'm working with a friend on a new update so I hope u'll like it. We changed a lot.

A new update known as paV1.03. This update is a major update compared to the previouse ones.

Just extract it in your: Ancient Wars Battle of Hellas folder.

The Pre-Alpha v1.01 is out. I've been working on this for the past two weeks, and I'm happy what I did so far. I'll try to update this game every month...

I was wondering if is this mod still WIP or have you stopped working it?

Hey there! Glad you are interested in this mod. Check out our revived World Forge: Legends Project here:

And join our Discord server for news and test builds to play with before everyone else does!

In the End someone makes a Mod for this Game series! But god damn it, no RTS Mod hahahaha. I would be realy glad if it would be possible to adjust resources and building time... Though great work and I will definetly try this out! Good luck on that, I am a Modder for Rome 2 and I know the Pain of Modding! So thank you for you time guys!

I respect your opinion and there is a little "addon" for the original game that I've made :P
Idk it seemed to me that this game needed a Battle Arena, but yh. I was planing to make the game a little better when I finish my work here, like right now I want to release the "Last Update" and be done with it.
btw the addon: Mediafire.com
It's the Indians Race in Custom Battle addon, if u haven't tried it already. Btw if u happen to play the mod, could u tell me what're your thoughts on it? Thanks for the support brah :D I hope u enjoy my little mod.

Hey there! I gonna try it. I also know of modding, so maybe you can say to me which file i need to edit for resource changes? I more like infinite resources ^^. Also is there any Map Editor? The file you sent says Fate of Hellas? I thought your Mods are for ancient wars Sparta?

Fate of Hellas is just an addon... but for some reason Jowood didn't like the idea that the folder name should stay Sparta. And there is a map editor. When u launch the game Press CTRL + E and an editor will be opened. btw u can find the editor in extras (already said that in the changelog or wutever). Btw. Jowood added new shaders and antialising into the game... that's the only difference between AW:S and AW:S-FoH.
Infinite Resources: Open cosnole and write giveme_all (press the button under ESC to open console TeHe :P)

ah ok, so i can just paste your Mod into Fate Of Hellas Folder also? ctrl+e, hod did you know this? thanks! and yes i saw you implemented it in the extras. Any idea why i can load any maps? It gives me an error...The Cheat doesnt make all resources on the Map be infinite right? Just gives the player 999999999 resources right? If yes its not what i wanted :) I want real gameplay but with much resources on Map.

yh it's the same ****. About the editor, I could make a video on how to edit maps, since it's kinda... wierd. U need to load the map from "landscape" folder in each map. So u want to now some "deeper" stuff... yh u can add any weapon/armor, any hero, give basic damage over 10000... it's basicly CTRL + O i think just try CTRL + U/I/O/K, not sure is it the same for every keyboard, since I've noticed that it changes sometimes. When u open an so called "entity editor/panel" u scrole down to abilities, there u'll find "ab.role" where u can change HP/DMG/EXP and so on. I'll send u some private pictures that are connected with this topic.

A Game of Thrones 2.0 Westeros Only Multiplayer by Lordunhold v 1.02 Crusader Kings II