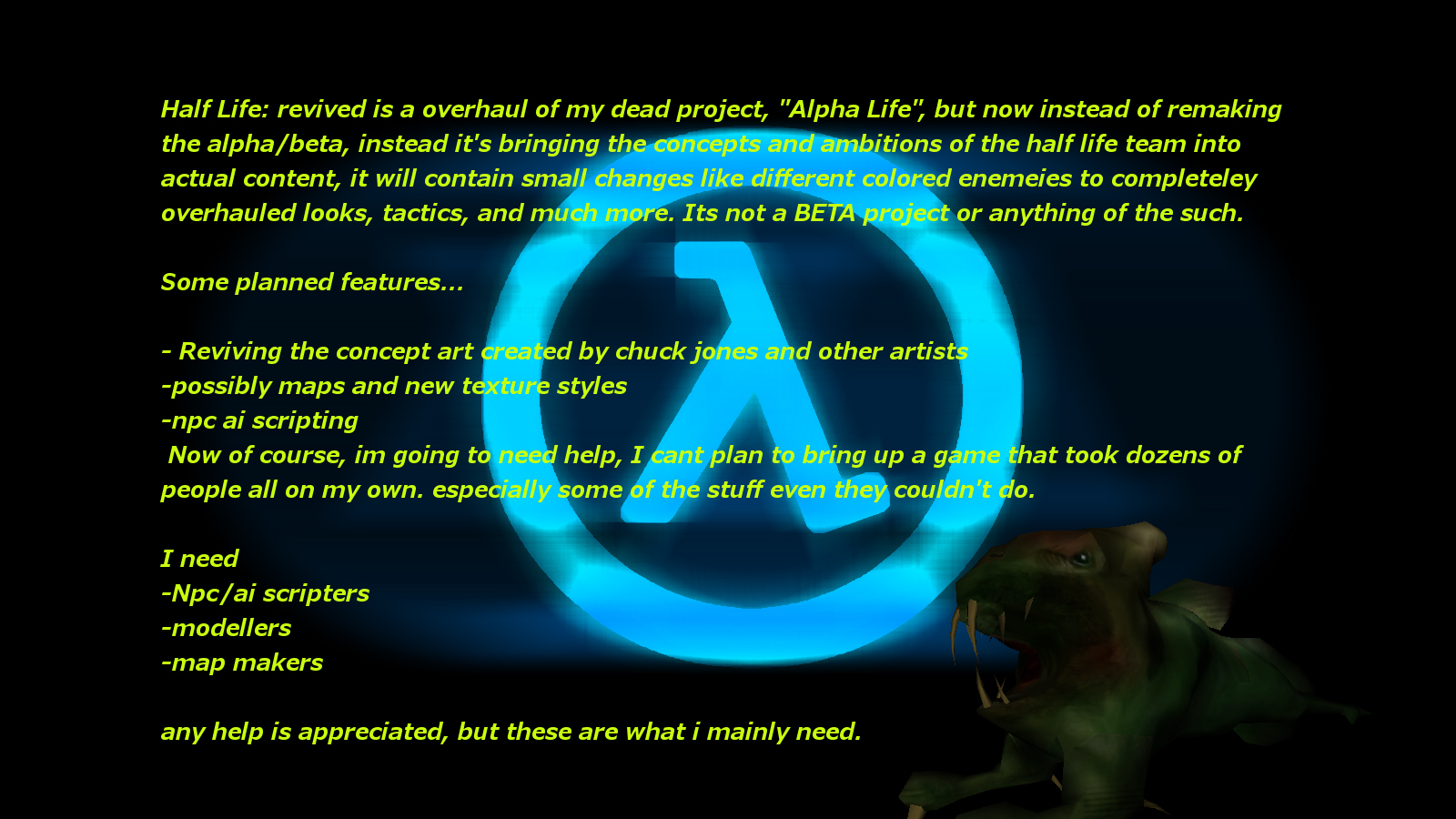 I'm sorry for the slow progress lately. Other things have been coming up and some difficulties have come across.

1. I took on a little more than I could handle and now I'm tangled in a whole different project. It takes a lot of time and involves a lot of development.

2. I ran into a problem with a concept.
I was working on the vortiguant (or alien slave). when I noticed it had 2 concepts, one much more different. I wanted to do that one since it seems like it fit with the early concepts, but my attempts to model it didn't come out so well, it would need skeleton modifications, which may seem easy, but isn't really when it would mean modifying quite a bit of animations to fit the new skeleton. So don't expect the vortiguant to be perfectly alike.

I should also mention that due to steam messing up half life with the valve hd, which seems to remake itself whenever deleted, it destroyed my models i compiled, so I have to recompile them -_-

I recently got the models to work in game, plus some more work on the scientists. Thanks to some people who helped solve a little issue with the models. I hope to post some screenshots soon.

Thanks for continuing to follow my mod, I promise not to disappoint, expect a surprise soon.

im assuming you thought this was dead, well theses some news i have.

unfortunately, i do not have it right now, but it is almost done, the demo at this point, does not have maps yet, i'm working on that, but i will soon...

since i do not have mapping skills, i need some one to help me remake the maps from the pre-release version of half life, the more help i get, the faster...

Hey guys, It's me! You probably all thought I was dead huh. Well, have no fear, I'm not a ghost or deceased for that matter, I have come back to half-life...

I am wondering if you can put up this mod for beta testing because I could kill to play this mod.

maybe, ile decide as soon as this new update comes out!

if so, you can expect a beta or something of those sorts.

Thanks man I love the old Half-Life storyline

Sorry for I didnt read the news, I am a bit lazy, and I not very good in English ... your mod is looks pretty nice anywayz :)tracking it...

Oh, its cool. Thanks too

Seems neat-o. I'll be tracking this, good sire. Cool to see a non-beta beta mod...or overhaul or some thing. Anyway, it catches my eye. It's true that practice dose lead to perfection!

hey, I just saw you got a new splash on the front page, but its off centered, and you still have text in the description. I figured out how to get rid of all that, and also how to make the splash image fit perfectly. If you need any help on that just pm me.

Is this mod going to try to recreate the old betas/alphas? If it is there are many mods that try to do that. But if this mod is taking inspiration from alpha/beta concepts and creating new levels/story/characters with them, this could be a cool mod.

My advice is to try and create something unique with an alpha/beta feel to it. There are already plenty of alpha/beta model packs out there.

Wow, after I posted this I refreshed the page and saw the new summary. If you need help, I packed some of the textures exclusive to the alpha into a new wad. You could use that if you want it. I'm not that great at HL coding, but I know how the weapons and item system works and I understand NPCs and AI a little, I am busy with my own mod so I can't help full time, but if you're stuck on something, hit me up and I'll help you if I can.

But, I would be happy to have you on the team, I've always loved your work, like "Hazard"

ok, ile keep it in mind, im kind of overwhelmed right now and have to get everything sorted out, then im gonna try to assemble a team of sorts.