The Plague: Age of Chivalry

From the creator of Age of Chivalry comes The Plague, a True FPS action game set in a medieval themed fictional world. It is a multiplayer game that is designed to be played together with other players online. 2 factions, 4 classes and lots of infected. Play as Archer, Crusader, Plague Doctor or Blacksmith.

It all begun hundred of years ago in a land divided by two rival factions. Both factions believe they have the right to the throne, and have been waging war over the crown for as long as anyone can remember.

But death takes its toll, corpses and blood red rivers makes the perfect growing grounds for diseases of all kinds. Where and why it all begun, is still unknown. At first it was only a few infected, in a small village. But it rapidly grew and spread all over the lands.

The two factions who once where fighting each other, now must stand side by side to fight an even greater enemy, the Plague! But the hate remains strong within the factions, and it is not with joy that they must to seek help from the enemy.
There are a few places where the plague has not yet reached, these places now have huge value. The plague knows no boundaries, only the strongest will stand tall, only the strongest survivor will rule.

Take sides in the battle against a greater enemy. Fight the enemy, the plague and in the end be the last one standing! Choose your style of gaming, be the team support or on the front-line. Play as an Archer, Crusader, Plague Doctor or as a Blacksmith. The four classes are each needed to form the perfect team and become the winners.

Each map tells its story and has its own style of gameplay. From a carrying a ladder to besiege a castle wall to killing 1000 of Infected.

2 factions, 4 classes and lots of infected. Play as Archer, Crusader, Plague Doctor or Blacksmith. Each character is needed to make up a perfect team. 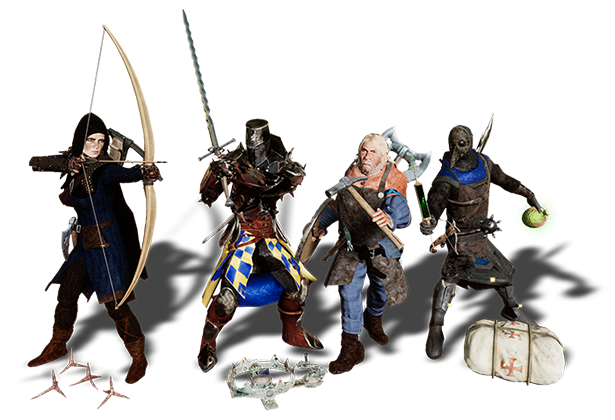 Archer
The Archer is the light class, she has speed and agility as well as impressive skills with ranged weapons. The bow, and crossbow are the favorites in her arsenal. A small axe can be used for quick attacks in close quarters. To keep her enemies at range, she has a bag full of caltrops to slow them down.

Crusader
The almost perfect soldier. He is all that you want from a melee fighter. Swords and shields are his weapons of choice. For ranged combat he has daggers that he can throw.

Plague Doctor
If you loose your head to a sword, then there is no need to call on the doctor. But if you are hurt or bleeding, then the doctor has the medicine to get you going. Whatever the toxic is, that the good doctor keeps in his syringe matters not, as long as he gets you going. Better keep him as a friend, as the toxic mixtures that he keeps can also be as deadly for a foe. He also has an axe for close encounters and has bottles of fumes that blurs the vision and makes for a great escape.

Blacksmith
With his hammer he can do miracles. He can build siege engines, repair broken structures. He also manufactures weapons, arrows and other stuff you need to keep the battle going. Fire is an element that he knows well and use in all forms. Build Ammo-crates, Bear traps or Fire-cages to aid your team.

During the test of the release candidate build for the upcoming Early Access release on Steam this coming Wednesday the 14th. We recorded the session and we would like to share some highlights from it.

The movie is very biased towards the Archer class, that is due to that we are currently testing a new weapon. When choosing the clips from a very long recording, we tried to select scenes that show the intensity of the game and the fast tempo.

There is always that third factor of the infected around, you can never be sure what lurks behind you, or around the next corner. Even though the game is designed to be played with 8 vs 8 humans, there is also about 20-30 infected running around at all times. So if 8 enemies seems low, it sure does not feel so. Even the simplest task of getting from your spawn to the objective, most often means that you need to take care of 3-5 infected on the way there.

We hope you will enjoy the highlights and that we will see you on the battlefield on Wednesday the 14th when we set sails on Steam with the Early Access release.

📯The long wait is over! We have great news for you! After a few rounds with the release team on Steam, we are now ready to set sail on Steam. 🕹️The...

Indie
Tags
Embed Buttons
Link to The Plague: Age of Chivalry by selecting a button and using the embed code provided more...