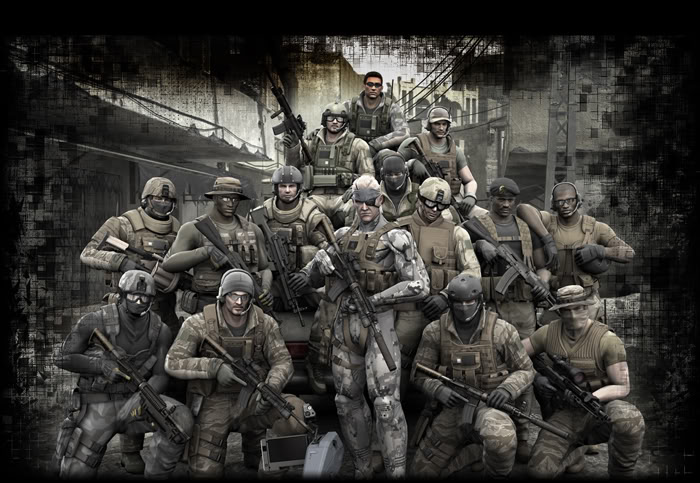 
The Following Maps Are in Currently in Development :

*images below are from the actual MGO / MGS games*

I THANK ALL OF YOU WHO FOLLOWED MY WORK!

I have great respect for the Metal Gear Saga, and Hideo Kojima.

To me the "Metal Gear" franchise started ended with Kojima working at Konami.

I have NOT been issued a C&D Order, but I feel I should just let the series rest in peace.

I HAVE STOPPED WORKING ON THIS PROJECT :(

The "work" I've done here won't die (I'm not deleting it)
I love these iconic locations, so I'll finish them one day...who knows?!

A long overdue update on the project. It is rather vague, but BIG things are going on behind the scenes.

It's a been some time since the last update! Some things have changed...

Metal Gear Online (for PS3) is permanently going offline, so the "Map Vote" is over, and a map has been chosen!

I hope everyone is enjoying Metal Gear Solid V: The Phantom Pain! ;)

When this was a "mod" it was using the Crysis games "multiplayer" modes etc. as a code base...
Now building an entire multiplayer game from scratch is not something I want to attempt.

I'm leaning towards turning this project into a short original "Metal Gear" game/experience.
Nothing is solid yet though, but I won't let the work I've done won't go to waste! :P

So today EPIC made the Unreal Engine 4 FREE FOR EVERYONE! Unrealengine.com ENJOY! ;)

any news on this?

Well with MGSV, and MGO3 coming out this year I'm waiting to see what happens...

There is no point to re-create an MGO experience for PC if the actual game is coming this year, so this project may change it's form a bit (?) depending.

This project is sort of in "limbo" at the moment while I'm learning the Unreal Engine 4...
Hopefully I'll have something to share by the years end, but no promises I'm afraid :(

*I've been toying with the idea of actual Virtual Reality (Oculus Rift), VR missions etc. though* ;)

Just to update everyone on what is going on with my projects...
I've been far too busy with life to work on anything since the end of last year :(

The next major issue is that Crytek is planning a "subscription service"...
They will be charging a monthly fee to use their engine like Unity and UE4 are doing :(

This may, or may not result in support for the *FREE* CE being dropped soon?
So right now my projects are all sort of on hold while I wait to see what Crytek does :(

Crytek has stopped supporting the "FREE" CE (CE4).
They now want to charge you $10 a month to use their engine.

We are stuck with a half broken "FREE" engine now.

What about moving to the source engine? Not as good graphics, but will allow you to continue your project free on an established engine.

I LOVE your response!

I'd comment more on this myself...BUT...
It would just end up a wall of text spewing with rage!