World War One has arrived in the mountains of the Italian Front - beautiful but deadly in equal measure. Inspired by the two year struggle for control of the Isonzo river valley and Alps during World War One, Isonzo elevates the WW1 Games Series, figuratively and literally.

The new Offensive game mode puts you right in the middle of key historical offensives on the Italian Front - lead the charge across stunning Italian landscapes on the attack, or prepare your defence on dynamic battlefields.

Everything is recreated based on research and field trips, from the uniforms to the huge arsenal of weapons. Blow your enemies away at range with mortars, artillery and air support, or finish the job at close quarters with a bayonet. Watch out for the dreaded poison gas...

You’ve never experienced WW1 action quite like this! Isonzo will be available on PC (Steam and Epic Games), PS5 & PS4, Xbox Series S/X & Xbox One.

We’re only scratching the surface of what’s new in Isonzo - there’s more yet to be revealed, including details on the new features and beautiful Italian battlefields are on the way: wishlist now on Steam , Playstation, Epic Games and soon Xbox. Also follow our Reddit or Twitter to get the latest updates!

The WW1 Game Series currently includes Tannenberg and Verdun (set on the Eastern and Western Fronts). These authentic WW1 shooters let players choose from a range of squads from across the war, as they fight for control of the ever-changing frontlines.

While you wait for Italian Front to heat up, you can already join trench warfare in Verdun, or maneuver for control of key sectors in Tannenberg.

Isonzo Intel #25 - Death from above

Today we’re looking at the third set of support options available to officers in Isonzo: the Aviation Corps! We explained artillery support available and the Chemical Regiment options for gas and smoke in previous dev blogs. The Aviation Corps has the same format of five options, with each tier being relatively more powerful but also having a longer cooldown before it becomes available. Let’s jump in!

The Recon flight is a staple WW1 Game Series aviation call-in since Verdun, and for good reason. The early aircraft used in WW1 simply didn’t have the ability to carry a large quantity of explosive ordinance, and so had much more impact by performing reconnaissance missions. In particular the ability of aircraft to spot for artillery batteries could allow more accurate artillery fire at greater distances, though communication between the aircraft and the batteries was a problem. 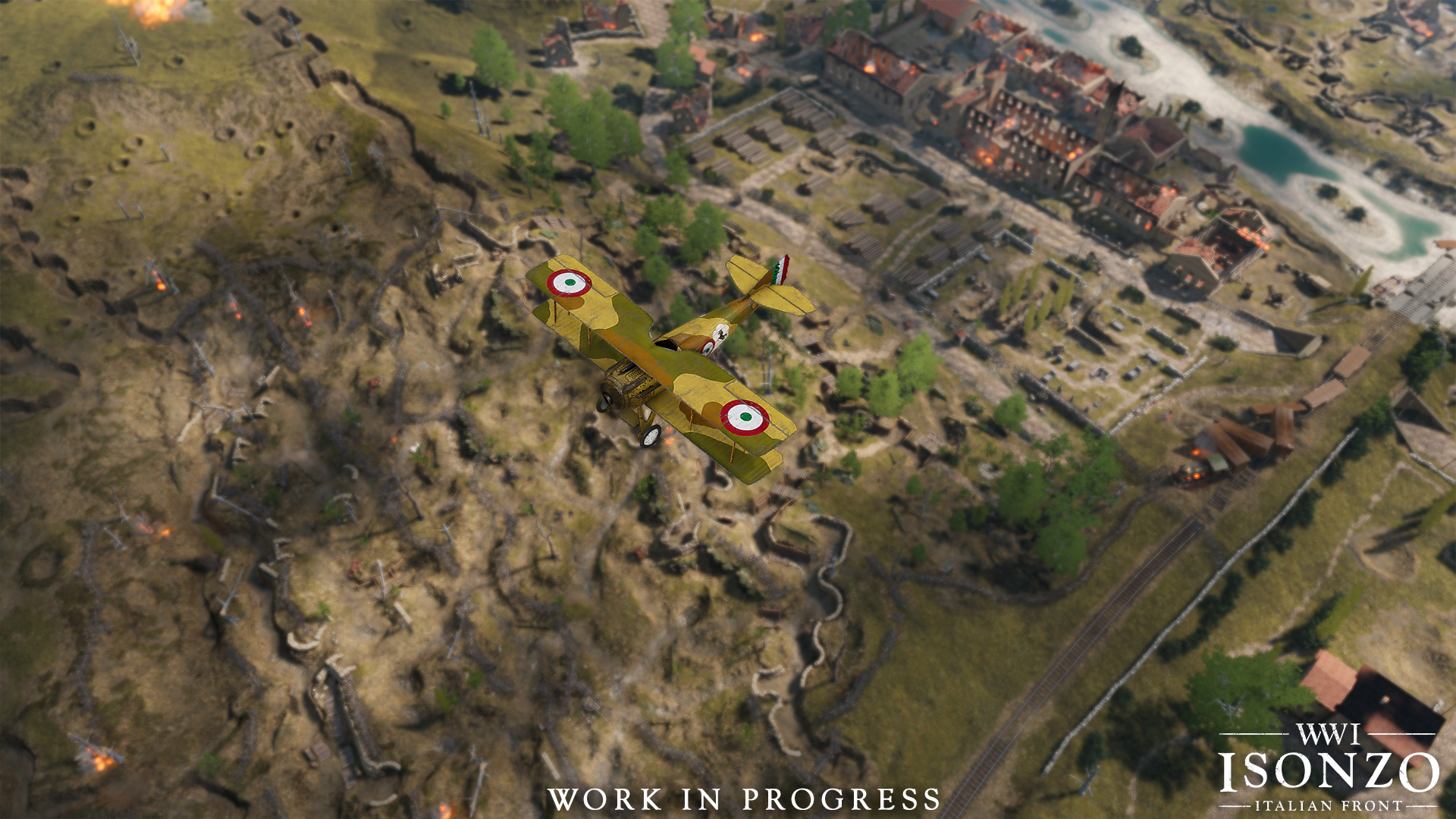 In Isonzo as in our earlier games, recon flights identify enemy positions, highlighting enemy infantry on your minimap. This information is useful for everyone, whether they’re a rifleman assaulting a trench, an officer deciding where to call for artillery support, or a sniper looking for targets. The recon flight has the fastest cooldown of the aviation powers, so can be used plentifully. However, if you have good officers or mountaineers who are using their ability to spot enemies, you’d do better to hold off until more direct impact call-ins are available…

The third of the five options is the Strafing Run. A fighter will strafe in a line from the target point, direction chosen by the officer making the support call. These bullets don’t have the raw firepower of the heavy artillery which is the third artillery call-in option, but the strafing run is the lowest tier call-in which targets a line! If you place your flares right, this makes it lethal for hitting straight trench lines. Place a flare at one end of the line, then call a strafing run to go all the way along the trench. Given that a lot of the trenches in Isonzo lack much in the way of roofing, enemies in a targeted trench won’t be able to avoid the attack.

Italian aircraft strafed enemy positions in late December, 1917 - a young Erwin Rommel reported it as such in his diaries, during the fighting for Grappa: “Enemy air formations drop down to a few meters above the ground and strafe our positions and those of the contiguous units.”

As we said before, early WW1 aircraft weren’t very effective bombers. Technology advanced rapidly though, and in Isonzo we got to represent some of the huge biplane bombers like the Italian Caproni! Compared to modern bombers their bomb load was a little lacklustre, but they made a big impact on public and military opinion at the time, and used right could still influence battles. 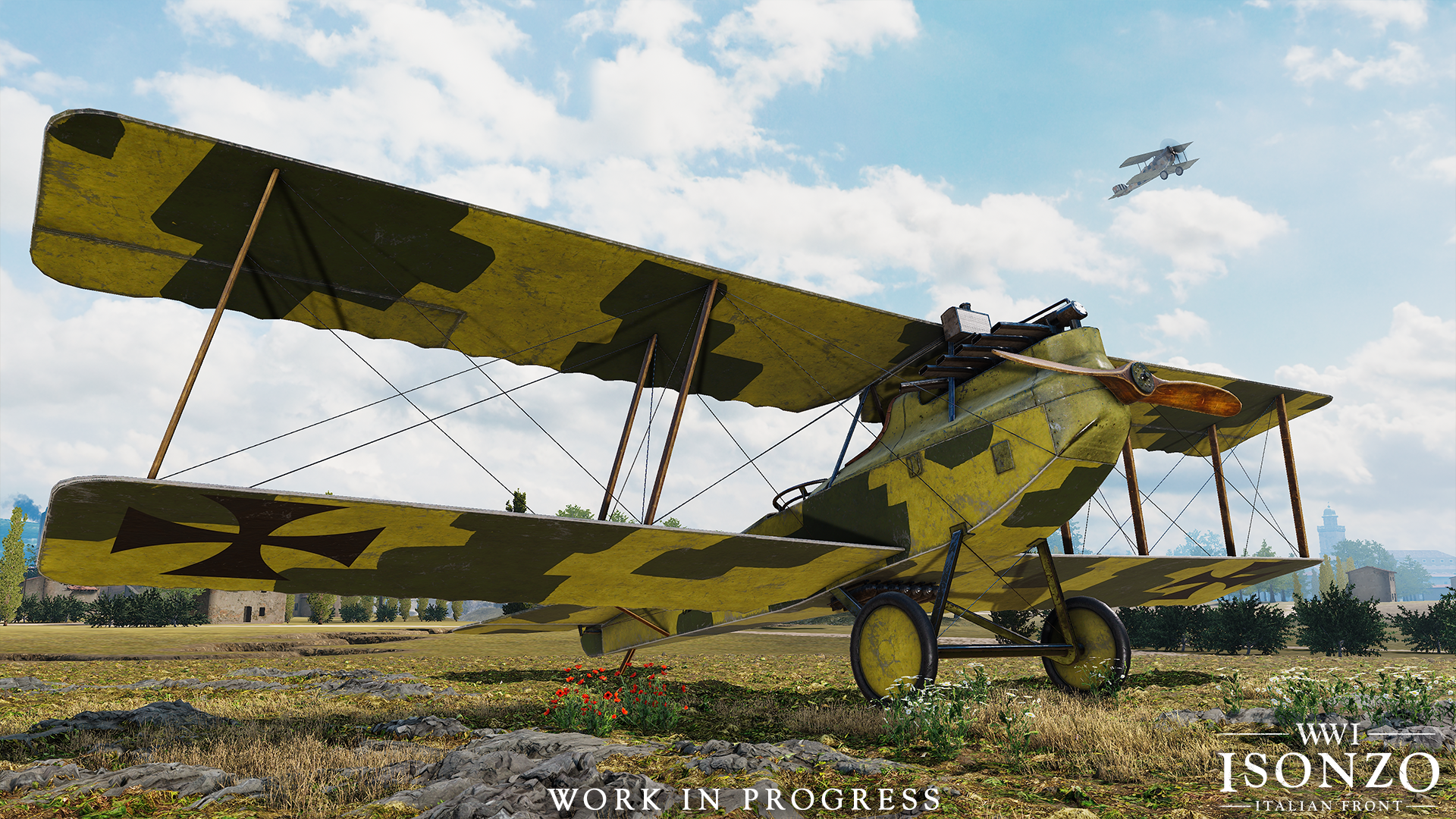 Austro-Hungarian Hansa I bomber - those cross markings might appear German, but they are ‘cross pattées’, which were used by Germany but also other countries at various points in history. This includes the Austro-Hungarians, from 1916 onwards - in part because aircraft supplied from German factories came with it already applied!

In fact, Italy was something of a pioneer in military aviation, having used aircraft in combat during a war with the Ottoman Empire in 1911. The Italian Corpo Aeronautico Militare conducted a large number of ground attack missions, with the aforementioned Caproni bombers starting raids on Austro-Hungarian cities in 1915. During 1916 some of the Capronis were diverted to supporting frontline troops in the Battle of Caporetto since there was such demand from Italian infantry for close air support. While the imprecision of this bombing (no modern bomb sights, for instance) limited the real damage done, an Austro-Hungarian officer’s diary described the sight of planes flying so low that bombs could be seen dropping from the fuselage as having a significant impact on morale!

The first bombing option available is the second tier: a small area bombing, where a fighter biplane will drop 10 bombs in an area. This is effectively a slightly more accurate and concentrated area attack than the low tier artillery call-ins, but with less total firepower. Useful if your artillery is still on cooldown or you want to knock out specific points like heavy machine guns. 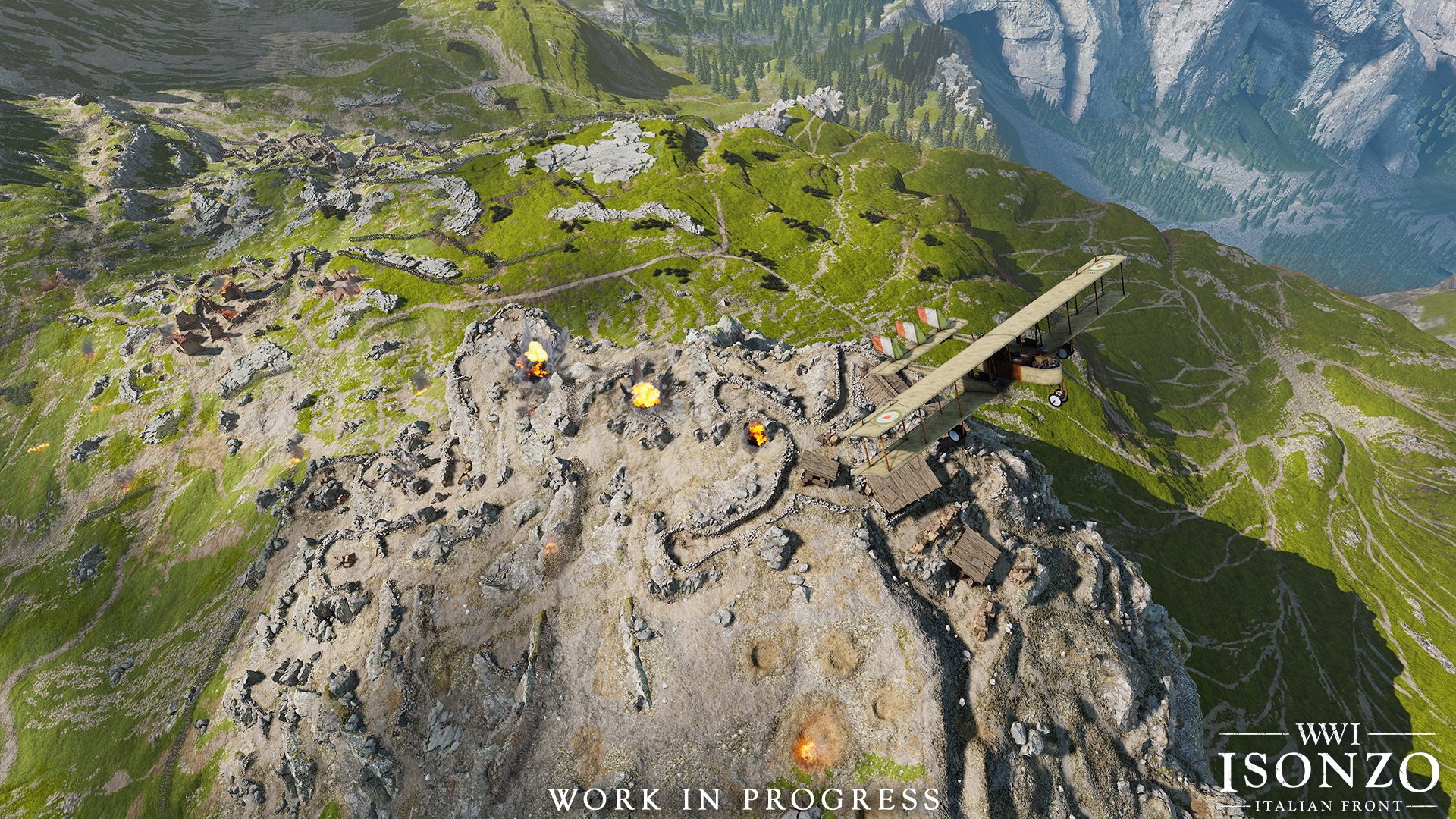 At tiers four and five though, you get access to the heavy bombers. Tier four is a single bomber targeting a line, and tier five is a three aircraft bomber squadron which does the same thing with more firepower and a wider spread. The single bomber is again an earlier line targeting call-in you can get earlier than the creeping barrage, but both bombing runs distinguish themselves from the artillery by producing a faster series of explosions. While the creeping barrage is designed to allow infantry to advance behind it and so moves slowly, bombing runs are intended to deal as much damage as possible before enemies can react. Of course, you can also combine call-ins from different categories - lead with a bombing run to clear an enemy frontline trench, then have the creeping barrage start behind it to destroy enemy reinforcements while your allies advance!

That’s all the support options in Isonzo explained! Officers will have access to all three categories of support, and since they each have independent cooldowns it’s vital to make use of them all. Which call-ins are you most excited to try out when Isonzo launches this September 13th? You can wishlist the game now!

We return to the Dolomites for a closer look at the objectives and each defensive line!

Isonzo will release this Summer!

Isonzo will be released on September 13, check out the new trailer!

Learn about the Rifleman class, backbone of the team.

Reminds me of Hell Let Loose; which I am currently playing and recommend while we wait for Isonzo to come out.

Well you could play Verdun and Tannenberg whilst you wait also

Cannot wait! All I've been thinking of is the glorious moustache I'll have on my face as I charge into battle!

so hyped it looks amazing!

Well done guys for the nomination. Been a fan of the WW1 series for a long time.

Gonna be the best game of 2022, even though all the gaming news stuff only will cover whatever dumb new cod or bf trash reskins come out