One hundred years have passed since the end of the first Independence War, and far from the riches of Sol and the core systems, trouble is brewing. Now, Independence War 2 gives space sim fans multiplayer action and lifelike spacecraft physics in this sequel to Independence War. The Badlands Cluster: Eight barely habitable star systems populated by the flotsam and jetsam of humanity who, after years of oppression at the hands of greedy corporations and ruthless marauder bands, are ready to fight back. 15 years after witnessing the murder of his father by the sadistic heir to a corporate fortune, Cal Johnston plans his revenge. With the help of a small band of escaped prisoners - and a dead war hero immortalised in silicon - his actions inadvertently become the trigger for rebellion. The stage is set for history to repeat itself, and force mankind once more over the Edge of Chaos...

Well, it has been many years since an update here. And in most of that time there hadn't been anything to report, other than the all but complete abandonment of any progress on development of Unstable Space. Yes, there were a few attempts to kick start things again, but ultimately nothing surfaced. Until now.

How did the Beta finally get made, despite the fact that the entire team, the lead and secondary coders, and everyone else gave up and packed it in years ago? Well, I never quite gave up. Sure, I had no skills in coding, whatsoever, but that didn't stop me hoping that some day a real coder might show up who wanted to finish the game. Granted, the chances were slim, but that didn't stop me from hoping. I mean, the game was really close to being finished...with just a last push..maybe a few hundred hours of coding by a real pro. That was all it would take! It turns out that the chances were a little less than slim. Eventually I came to realise that no one was interested in the game, or Unstable Space. Heck, maybe the whole space sim genre... Nevertheless, I thought...maybe I could...somehow...in some, remote...fashion...maybe I could teach myself how to program...then...finish the game?

So I did. I dove right into it, thinking maybe I could cut and paste and hack together something that was somewhat playable. 3 months and several hundreds of hours later I discovered that I could code, had to code, and had coded thousands of lines of...code. And the game was...complete.

Now, let's be honest here. I have hacked together an awful frankenstein of what it was originally supposed to be. And I have no idea if it will really work. Or whether it is really playable. Nonetheless, I have completed it to a point I think, or hope, it will actually work. No guarantees though. None. Zero. Here's some screenies to break up this wall of text: 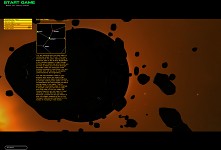 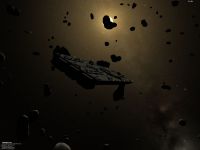 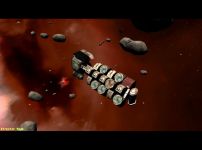 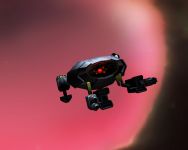 Ooohh...check out those late 90's graphics! Well, the graphics are decent enough to let you imagine you are in space. But of course, that is not where Unstable Space shines...its the features man! Unstable Space has so many features, that I can't list them all! Seriously. I cannot list them all, because I don't know what they are any more. I have forgotten about more features than I know are in the game. 10 years of developing this thing okay? 99% of that time I was the texture guy...then the sound guy...then the writing guy...then the spreaksheet guy...then the tester guy...then they everything except coding guy...then finally...the coder. Basically I took on all the extra jobs as one by one, over the years, team members faded away, dropped out, and dissappeared. Let's break up THIS wall of text with a big fancy features list...of text:

In addition, Unstable Space simulates life in the Middle States to a degree not seen previously in Independence War 2, or many other space sims:

NOT BAD huh?! Okay, those of you who are real sharp will notice I just cut and pasted that list from my own mod description. Of course that list does not include the features I have forgotten about, or that are not completed. It also doesn't include the dozens of feature enhancements, graphical upgrades, and improvements from Torn Stars, and from the vanilla I-war2. And those enhancements, graphical upgrades and improvements were considerable. As this is a 'Beta', it is feature 'complete' but certainly lacking polish in some of those features, and is also likely very buggy. It is hard to test a game of this size by ones' self.


Okay, those are just videos released a long time ago. However, they are relevant because now, you can actually go do and see that stuff! Besides...I can't really bring myself to spend too much time on promotion for a mod that no one cares about anymore. I would be better off spending that time fine-tuning it further. The handful of people who will actually play the game will forgive me for not preparing a fancy promo-video.

Where from here? Well, I am going to try and give as much bug fixing support as I can, over at the Torn-stars.com forums. I will try my best, but I can only give limited support. This project has already sucked my lifeforce down to the bare minimum. However, if a few people got into it, or even wanted to keep tweaking US and i-war2, I might make a few post release addons. New ships, cockpits, new types of NPC ships, more career paths, Bounty hunting missions etc. However, more likely than not I will just put on my shades, and walk away in slow motion as everything explodes behind me.

Last, but not least, credits. This mod was made only partly by me. The bulk of the effort was lead by GrandpaTrout, whose coding and vision most of this rests firmly upon. After him come a huge list of people, not limited to Joco, Hot4Darmat, Shane Maness, MDvalley, Jasper, Flamineo, EricMan64, Burja2, Zazicle, Qlippoth, Stephen Robertson and many others. This is not everyone, and those who I have missed I apologize to.

I thought that since I have claimed we have an almost finished beta, it would be unfair not to show a little sampling of what we/I am working with at...

80,000 votes. 4,000 mods. Over the course of 2 months, gamers from across the globe came together to decide which mods rank as the epitome of what our...

The Unstable Space Beta Low Res version. This Beta is a hopefully fully working version of the game, mostly free of bugs. Includes all features in mostly...

The Unstable Space Beta. This Beta is a hopefully fully working version of the game, mostly free of bugs. Includes all features in mostly playable state.

This is a video of the eDrones of the Epitaph system. The eDrones are deadly, automated mining drones that have been converted for warfare. They are part...

This is a video depicting the current state of our Capsule Space simulation for Unstable Space. The simulation allows a pilot to actually pilot a ship...

Torn Stars, as a simulation, was meant to depict a fairly realistic space environment. As a result space is quite dark, lacking almost any ambient light...

This is an install guide and basic tutorial. Follow the instructions for installing the game very carefully, otherwise you are bound to encounter problems...

Love the game and still playing. Still the most fun to fly IMO(good stick essential of course)
This mod looks awesome man, can't wait to check it out. Thanks!
GB_Cobber

Love the demo to this game to bits.Pity I can't get the full game. :(

GoG has it for cheap. Plus it'll run on current PC's.

May I ask, can we buy new ship in this game? meaning can we change what ship we have on default and change it into a much bigger and better ship?

P.S. Sorry if there is a FAQ for my question

You gain more ships as you progress through the story. Later you are able to change your ship and its loadout at the base.

Freespace 2 came out in September 1999 and I-war 2 came out in June 2001, so about a 2 year difference. Whether or not Freespace had 'Hell of a lot' better graphics is entirely subjective, and possibly irrelevant to the question of the quality or lack thereof, of I-war 2.

Freespace 2 had a hell of a lot of better graphics than this and it came out like four years before this did.

Hm. I remember this when my dad recommended to me, even through I was not very good but I rocked on Freelancer! XD

I don't know about amazing, but it was pretty damn good. Not a patch on the original though...

this game was amazing