Having just made it back onto the streets of Liberty City after a long stretch in maximum security, Tommy Vercetti is sent to Vice City by his old boss, Sonny Forelli. They were understandably nervous about his re-appearance in Liberty City, so a trip down south seemed like a good idea.

But all does not go smoothly upon his arrival in the glamorous, hedonistic metropolis of Vice City. He's set up and is left with no money and no merchandise. Sonny wants his money back, but the biker gangs, Cuban gangsters, and corrupt politicians stand in his way. Most of Vice City seems to want Tommy dead.

His only answer is to fight back and take over the city himself.

Back To The Future: Hill Valley 0.2g

Greetings time travellers! Has it really been over two years since our last update? My god, has it been that long! Things have certainly changed around the world in that time! The mod has once again stagnated during this time, but we are now back in full swing and ready to show off progress on 0.2g.

Hold up, didn't we post already to say that 0.3 would be the next version of the mod?
Yes we did, however building an entire Hill Valley map from scratch is a painstaking and very time consuming process. While we have a basic landscape in game, it is very empty and we're sure players would soon become bored with driving and flying around a mostly empty map. As such, we have made the decision to stick with the Vice City map for the next release, with the sections of Hill Valley which we do have modelled merged as best they can be with Vice City.

The team have been hard at work making massive improvements to the in-game mechanics and effects - you could say that 0.2g will be the biggest leap forward for BTTF:HV since version 0.2d released all the way back in 2007!

So what have we got lined up? The short answer is plenty, the videos and images below are but a mere peek into what we have planned for 0.2g. 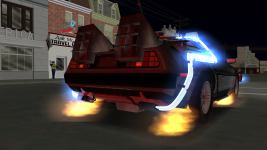 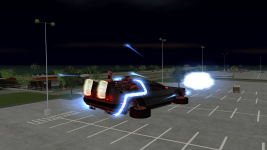 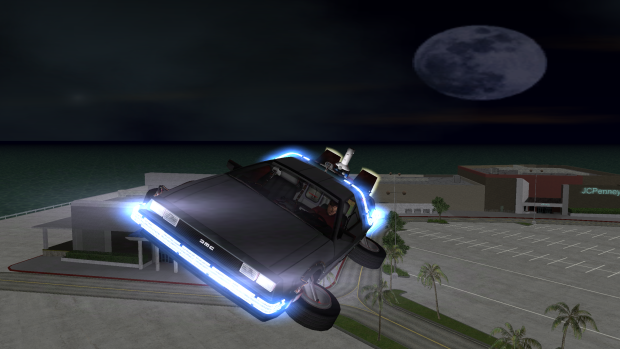 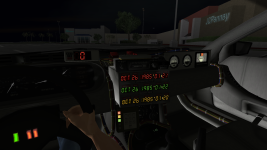 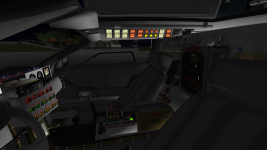 We also have an all new flight/hover mechanics system developed, flying the DeLorean around Vice City has never been so good! We would encourage you to check out the live stream posted to our dev YouTube channel to see the new flight system in action.

Additionally, thanks to the new method of animating parts on vehicles, all animated vehicle parts (including all DeLorean variants, the Jules Verne Train, Rogers locomotive, Doc's GMC van, the 2015 Citroen taxi to name but a few) will now be completely lag free and will no longer show as a drastically different color/shade to the main vehicle!

In terms of timescale for a release, we still have many further improvements we would like to make, however we are aiming for release this summer.

Well, we'd better wrap this post up now as it is a little longer than initially planned.

To get the very latest news you may wish to consider joining our discord server and YouTube Dev channel.

Stay tuned for more updates, we'll see you all in the future!

GTA: Vanilla Vice has been updated to version 1.1!

Welcome back to Vice City. This mod keeps the original game atmosphere in high quality.

This is modified version of vice city considering modern Miami theme. It includes a lot of modifications, just to make it look like Modern Vice City...

This is a swimming mod that adds the ability to swim like in GTA VCS and sprint with two handed weapons also supports mods like Classic Axis and Ginput...

Hovercraft vehicle will be available at Ocean Beach Lighthouse. Some important crash and stability fixes have been done for swimming feature. For using...

GTA Vice City Extended Features is not compatible with vanilla savegames please use these save files or start new game.

Interesting workloads have been transferred to the reverse, it works stably and nothing lags.

Good evening. 🌆
As of today, I would like to say that the work is in progress, we are not lost. 🙂

In fact, there is not much left for the release of the demo version, now the appearance of the game and scripts is being polished.

A little later there will be two new gameplay videos on our YouTube channel after which the release date of the demo version of the modification will most likely be announced.

In the meantime, we will pamper you with a few screenshots of Kanjo, which can be pumped into Sunshine Customs, in these screenshots Kanjo is in the "BODY - 3" body kit.

Have played this hundreds of hours, one of the best games ever made.

There is no other game that introduces you so well to the old good 80's as Vice City does .
Even now,when we have CryEngine,Frostbite and other futuristic engines,Vice City steps one foot ahead,because of it's "classy" presentation,incredible acting and tons of enjoyable stuff to do .

Even though I played San Andreas before Vice City, I actually enjoyed Vice City much more.

At least better than other GTA games.