A modern post-apocalyptic role-playing game with action elements
and a focus on the narrative and dialogue. A world of cyberpunk, science fiction, horror, the grotesque and trash-talk humor.
Supports Mouse, Gamepad and Local Co-op.
Release date: When it's done.

Thanks for voting and helping Death Trash on it's quest to become the 2022 Indie of the Year. You are now in with a chance to score some free games. Help this game secure more votes by embedding the widget (or link) we have included below on your favorite sites.

I’m Stephan, the solo developer of Death Trash, and I’m here to tell you about its future.

Disclaimer: There are more people contributing to the game than just me: James is working on the audio parts, and lots of people help with ideas, feedback and all kinds of support. But for the context of the following announcements and explanations, it makes more sense to speak from the perspective of the project creator and its sole developer.

I have a few announcements:

2. The game will be released on Steam, Xbox One, Playstation 4, Nintendo Switch and more PC stores.

3. Death Trash will be released on Steam as Early Access at the beginning of 2020. Please wishlist the game over here: Death Trash on Steam

Now, let’s give you some details and explanations about these decisions by phrasing them as questions and answers. 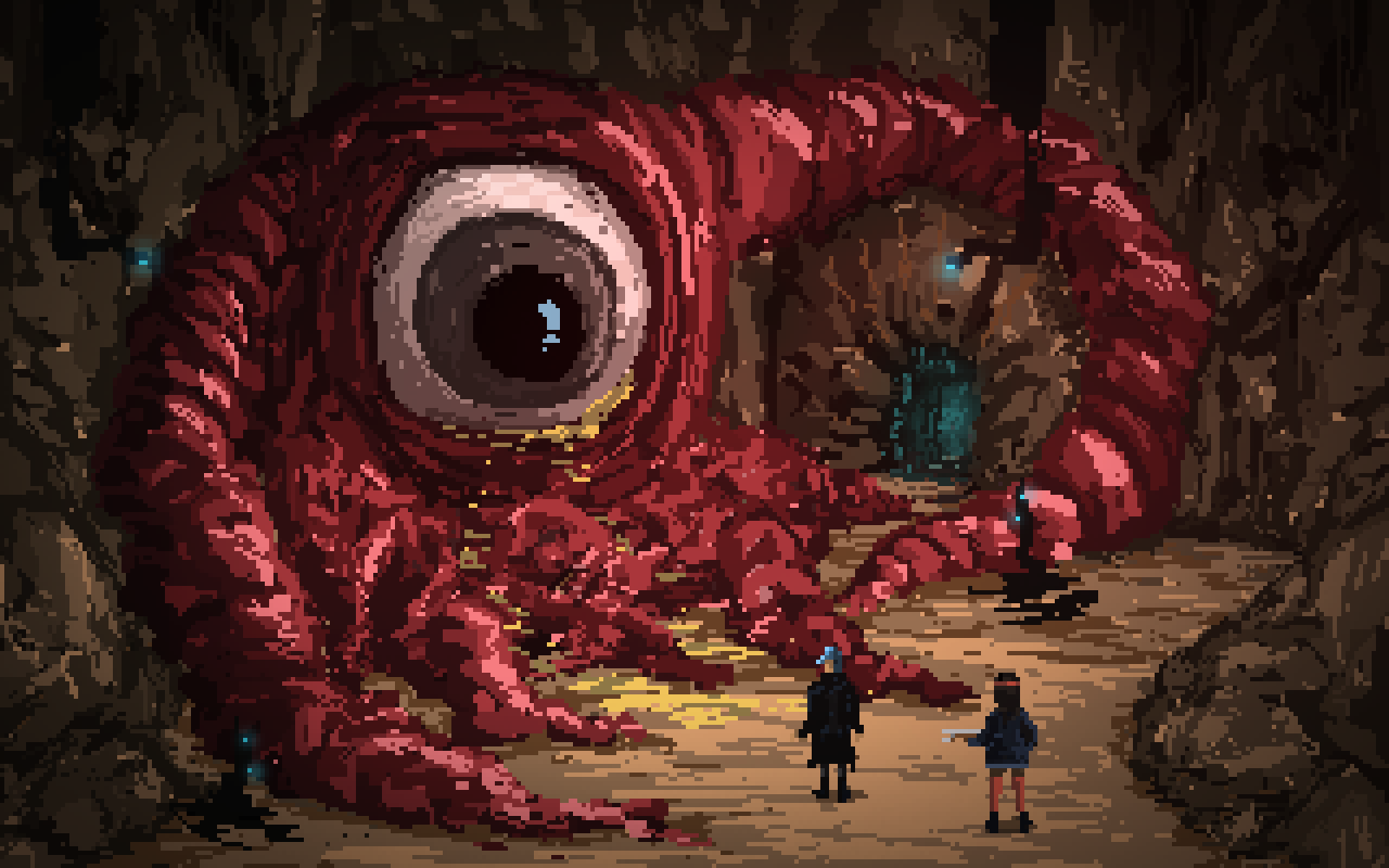 Early Access? What type of game is this again?

Death Trash is a semi open world role-playing game with a handcrafted story campaign in a grotesque post-apocalyptic setting. It features some replayability through choices you make, both in narrative and in gameplay. It’s quite a complex game to figure out for a solo developer, so it would improve a lot through broad feedback and more iterations and that’s my main reason for using Early Access instead of working behind closed doors and releasing when it’s all done.

Early Access will start with about a third of the final campaign, gradually update the game, and leave the final third to still be discovered on or close to the official 1.0 release.

If you have more questions regarding Early Access, please also look at the info on the Steam page.

Why don’t you work with a publisher, do crowdfunding, just release the game when it’s finished, seek other forms of funding, etc.?

This is what I have been pondering about for some years, and there were possibilities, but there also wasn’t an obvious answer, so I just kept working on the game, not deciding.

In the end though, I came back to a feeling I had in the beginning of the project:

Wanting to build something from the ground up, stay independent, work at my own pace, create an experience that’s worth to be remembered, be open through its development and listen to feedback so it becomes the best it can be.

My biggest fear on the other hand would be people having high expectations and then not delivering on it, which is quite possible considering I don’t have much experience yet in making advanced games.

I’m aware that some people would prefer this game to be released without a chance of spoilers and on shorter development time combined with a “higher budget”-feel, but I don’t believe that’s possible here on first try, especially with the aforementioned lack of experience. If this turns out good and I get to make another game (I have a few ideas) I’m sure I will be more capable to deliver like that. But I need to build that foundation first.

Why in a few months and not now?

The current version needs more locations, more quests, more combat enemies, a bit more of everything to make it a worthwhile first experience.

When is the final release?

When it’s done. I expect the Early Access to last about a year, but iterating on systems and incorporating feedback might take more time than that.

Can you tell us more about the console releases?

I’m planning to release the console versions at the same time as the official 1.0 release on PC. To better anticipate the tasks ahead I began porting Death Trash and I can tell you it’s already running fine on all three console platforms. There’s a lot of work left though and at this point it’s still unsure if I do this alone or partner up with someone.

If you have more questions or just want to comment on this, please use social media, write me an e-mail talecrafter@deathtrash.com or visit the Death Trash Discord.

Please wishlist the game over here and tell everyone about it.

Have a nice week! 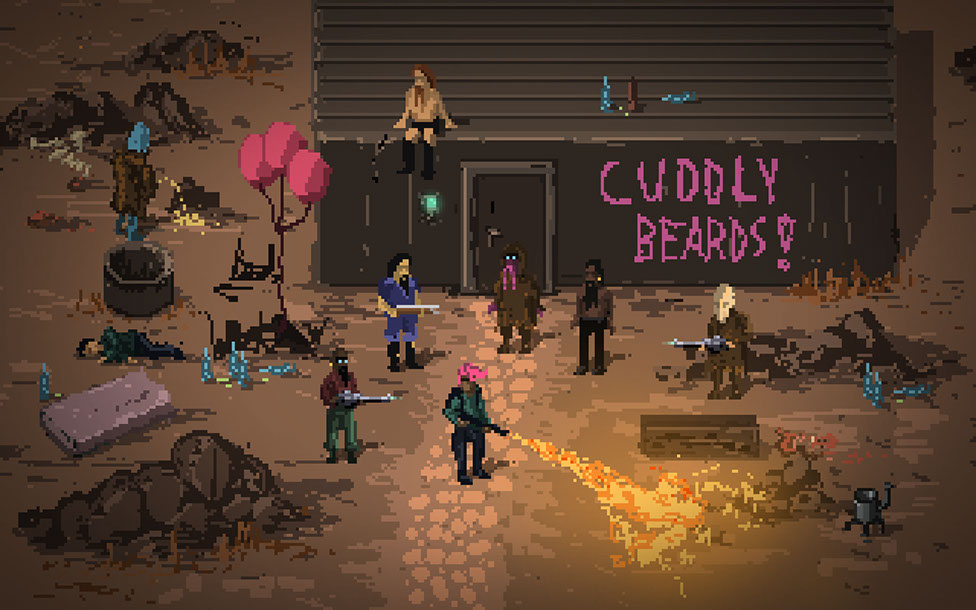 A summary of the work done in the last two months. A custom editor for behaviour patterns, characters comment now on different events like entering combat...

Progress, the friction of concept and reality, and a new tool.

Time for some post-apocalyptic pixel art!

Death Trash, a post-apocalyptic roleplaying game with pixel art and a love for the grotesque, says 'Hello' to IndieDB.

Does no one see a Shadowrun from SNES influence in this? The shooting system looks very similar, and the whole gritty feel. I dig it!

It looks great. I'm kind of getting that Fallout 1 & 2 feeling that I love and miss. All the flesh makes me think of The Master and The Children of the Cathedral, also from Fallout.

Looking forward to follow Death Trash!
Any plans for a demo?

Yeah, I love Fallout and it was of course one of the inspirations while coming up with a concept for Death Trash.
I want to make a demo, but I'm not sure yet when that will happen.

It looks great, I feel very attracted to the grotesque scenes, good work.

Thank you very much. I appreciate that.

Development continues, I'm just not updating here for the moment, sorry.
Scroll through Twitter.com and you'll see some GIFs of the current prototype.

is it still being worked on?

Yes, it is. Didn't have much time for updates here.
If you want to see the current state of the game scroll through my Twitter account, I'm posting almost daily about the game: Twitter.com