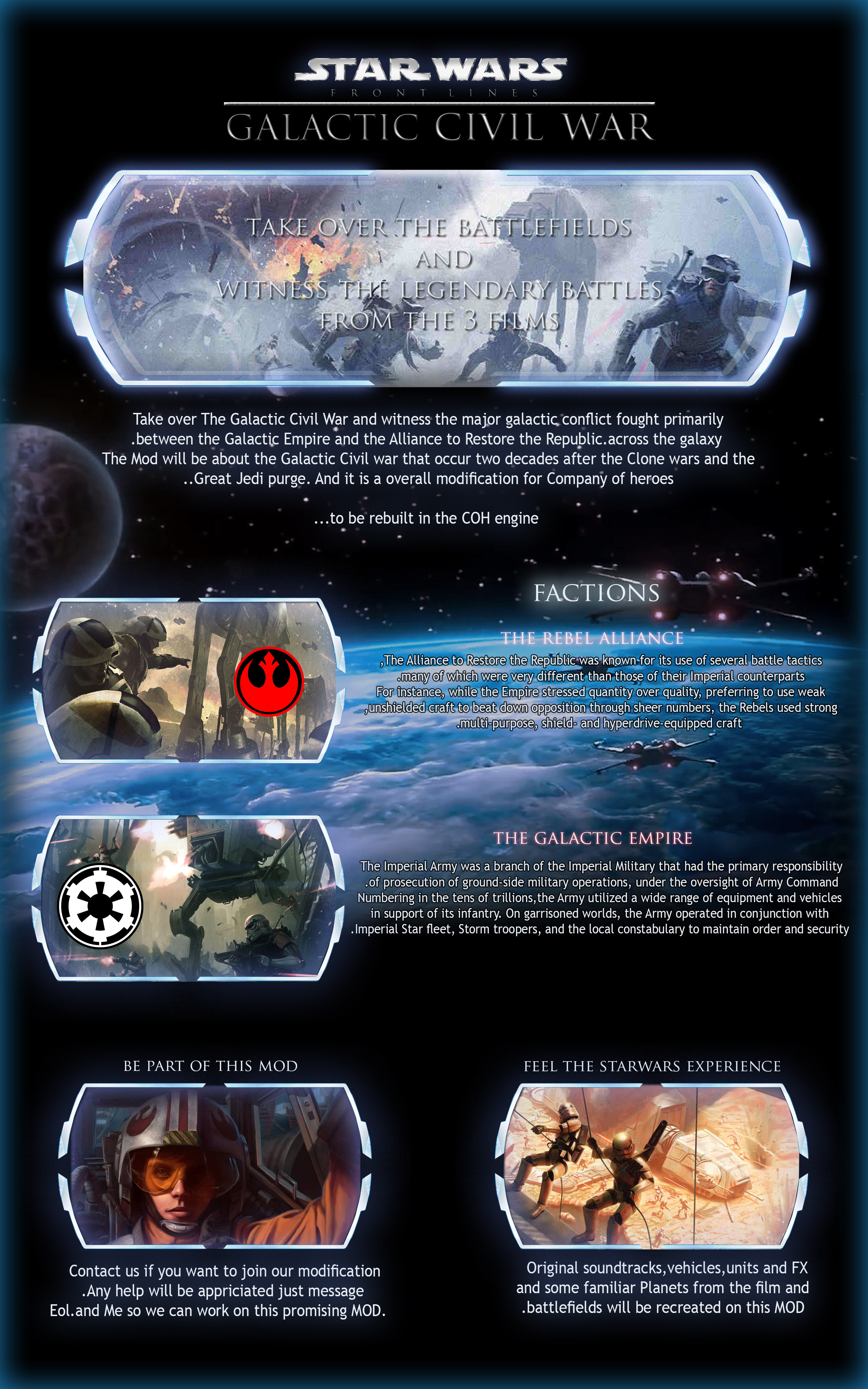 Facing the common issues of all little modding teams, we've been lurking in the shadow for a bit too long. Advised that we give some insights into our - even minimalistic - progress, here is a little something to break the silence.

First thing first, life signs ! We are not dead, still breathing, and hopefully summer brings a little extra time for us. Members have been struggling between university, finals, thesis and new PCs to re-setup... You get the picture. To brighten it up a little, here are some news. 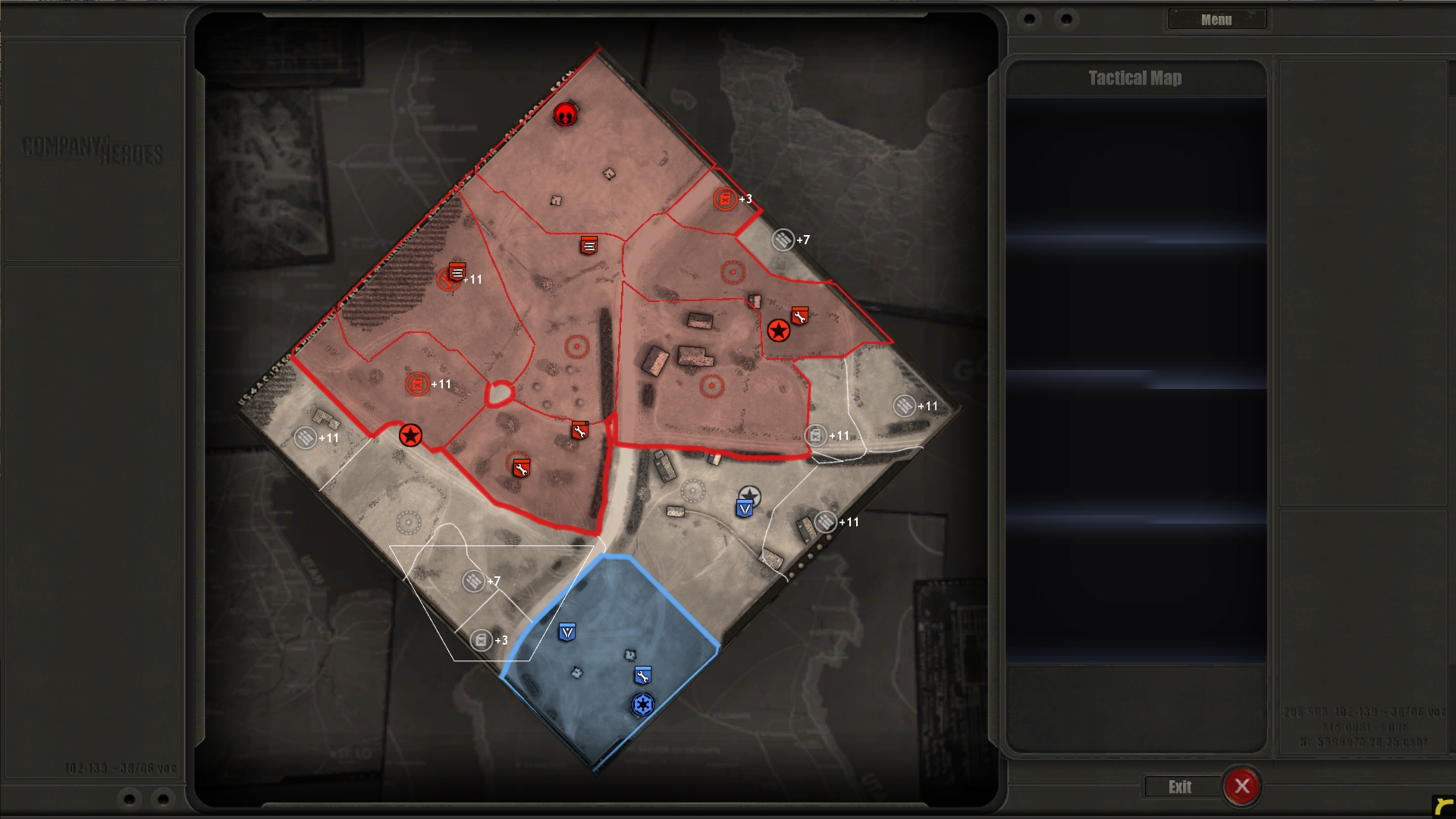 It's been a struggle, this being completely new to me, but we've got a working AI. Picture above shows a Hard CPU in high resources start capping all the map within the first few minutes of the game.

As expected, it's only a temporary solution that will most likely break when we get to the point of adding base building and the rest of the gameplay. But for now, it will do the job. This AI behaves normally, but do not expect it to be smart : subtle Doctrine gameplay is not there yet. Human opponents are still be highly advised for the full experience.

In the following section I will try to share with you some game-design thoughts. I expect feedback of any kind, including whether this kind of format interests you, and if you would like to see more of these as Dev Diaries.
(Everything displayed is subject to change (esp. upgrades and abilities costs) 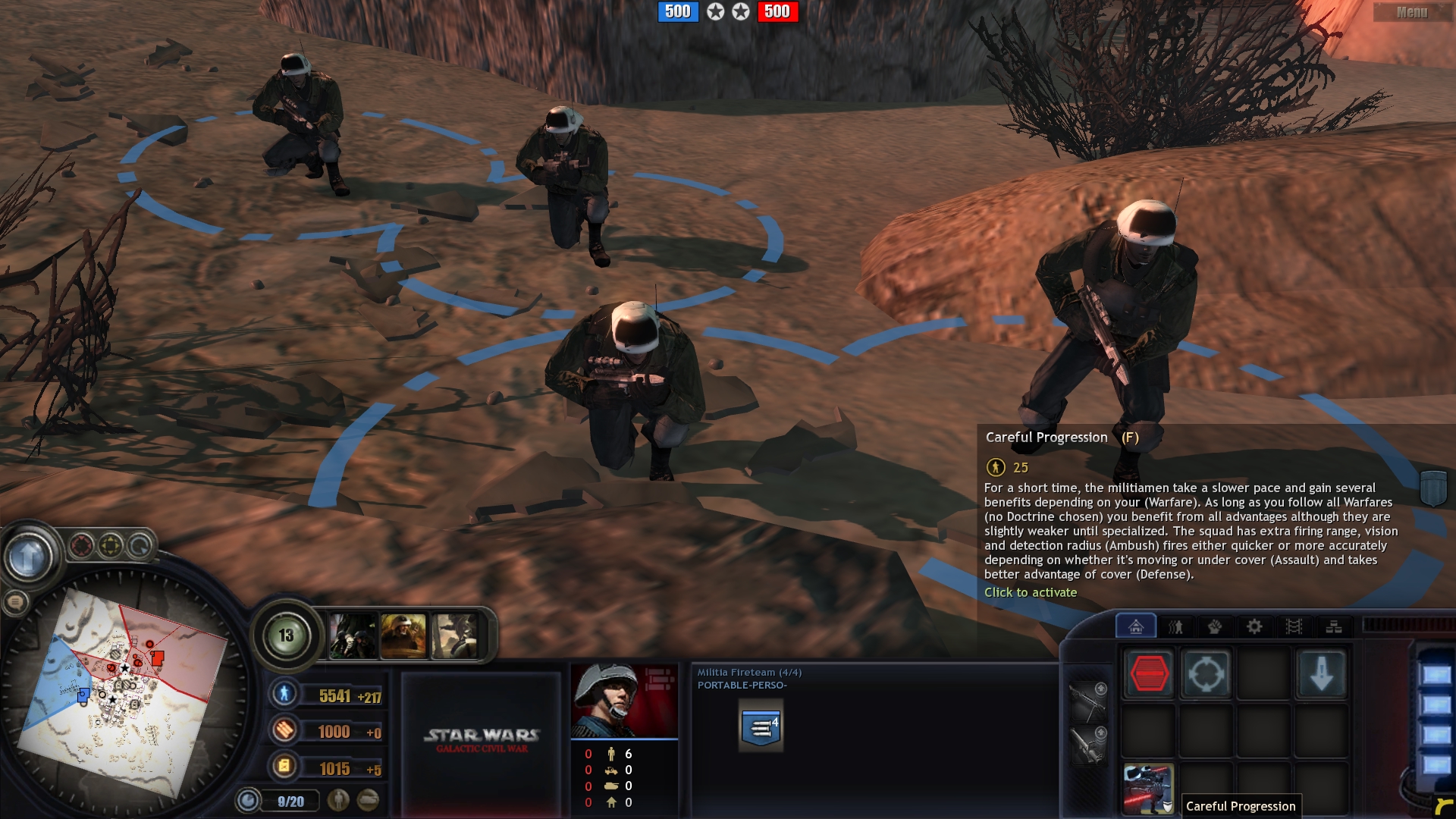 So, while planning Alpha 0.1, many things need to be seriously, to even completely reworked. Here I chose to focus on the Rebel Militia Fireteam because it embodies both some new features and ideas that are peculiar to the mod.

So here is the complete redesign of Alpha 0's "Rebel Weapon Team" (originally equipped with a DLT-19 heavy blaster). This 4-soldiers squad now fits a much deeper and more interesting role than a simple MG team, granting the player a more natural alternative to the Rebel Smugglers as an early rifle squad. Rebels have had that issue that there was no clear definite riflemen squads in early game. Smugglers were supposed to fit that role but it didn't feel natural considering their engineering purpose.

The new Militia FIreteam thus fills that gap. And it gets nice features to make it good. First and foremost, a brand new, complex ability called Careful Progression.

Wait, what are Warfares ? A feature peculiar to Rebel gameplay that we have not expanded upon a lot. Basically, they are passive bonuses tied to the Doctrine you choose. Obviously, with only one Doctrine available as of now, it's far from its full potential. But as we keep adding features to the game, it will become an important part of rebel gameplay.

The key point is that as long as you do not choose a Doctrine, all Warfares are active simultaneously. This means extra benefits for waiting. This buys time to choose the perfect Doctrine according to the situation, and increase your element of surprise as a sneaky rebel player.

The link with Militia Teams and Careful Progression : it changes a lot depending on the active Warfares : 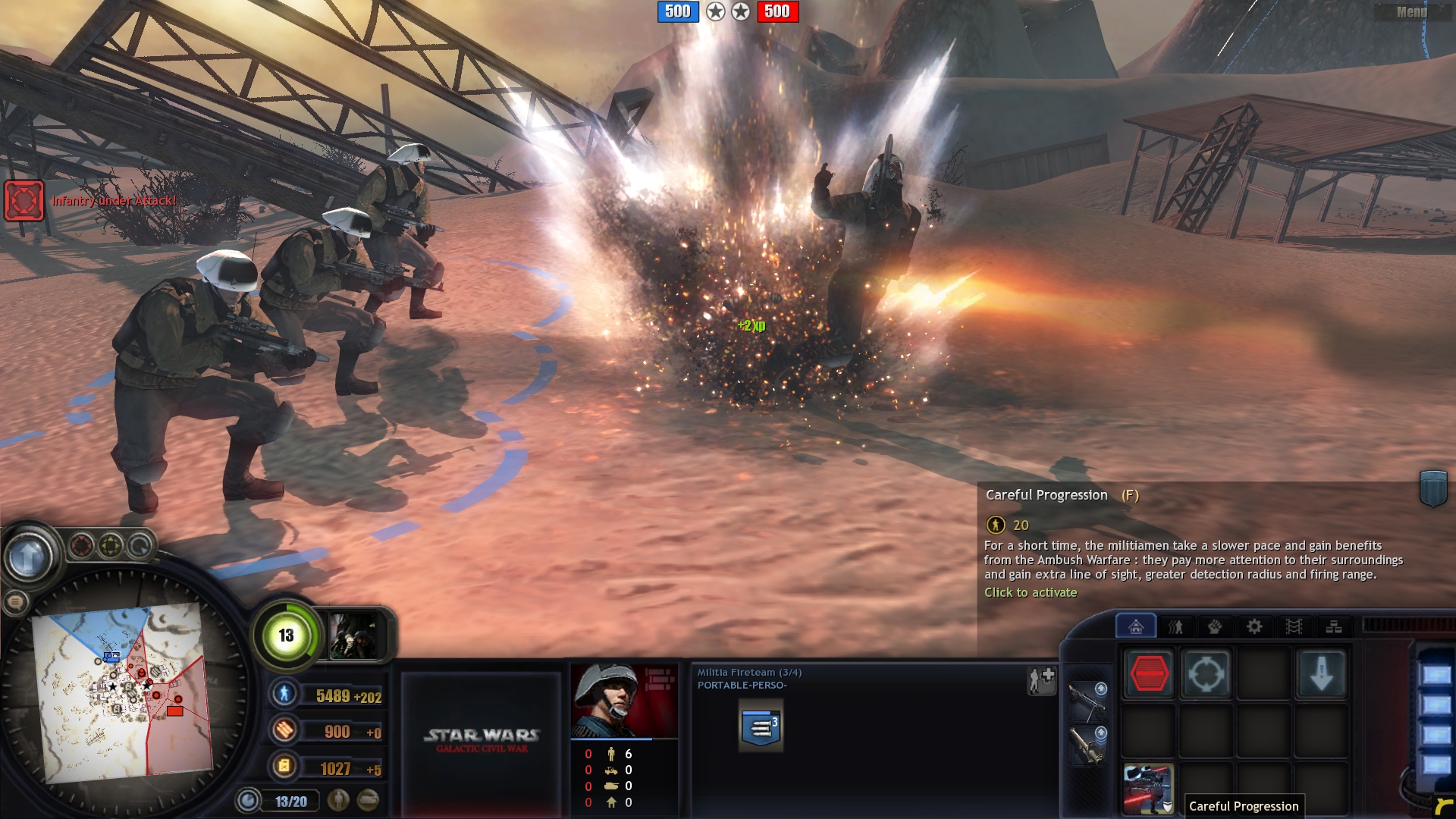 Notice how the description changes to fit the current selected Warfare

What are these bonus to the shooting skills ?

As you can see, Careful Progression is a complex modular ability which gives quite an edge to a well-used Militia Fireteam.

Now that we've got that part covered, what about their weaponry ? Militia Fireteam come with 3 DH-17 light blasters, and 1 A-280 assault blaster. This means they effectively pack more firepower than Smugglers (just 4 DH-17), without having the super-early suppression ability of the original DLT-19 setup.

But what about these two upgrades icons you spotted ? (Yes they are placeholders for now don't worry) Well here's some material to specialize this squad into a specific support team. 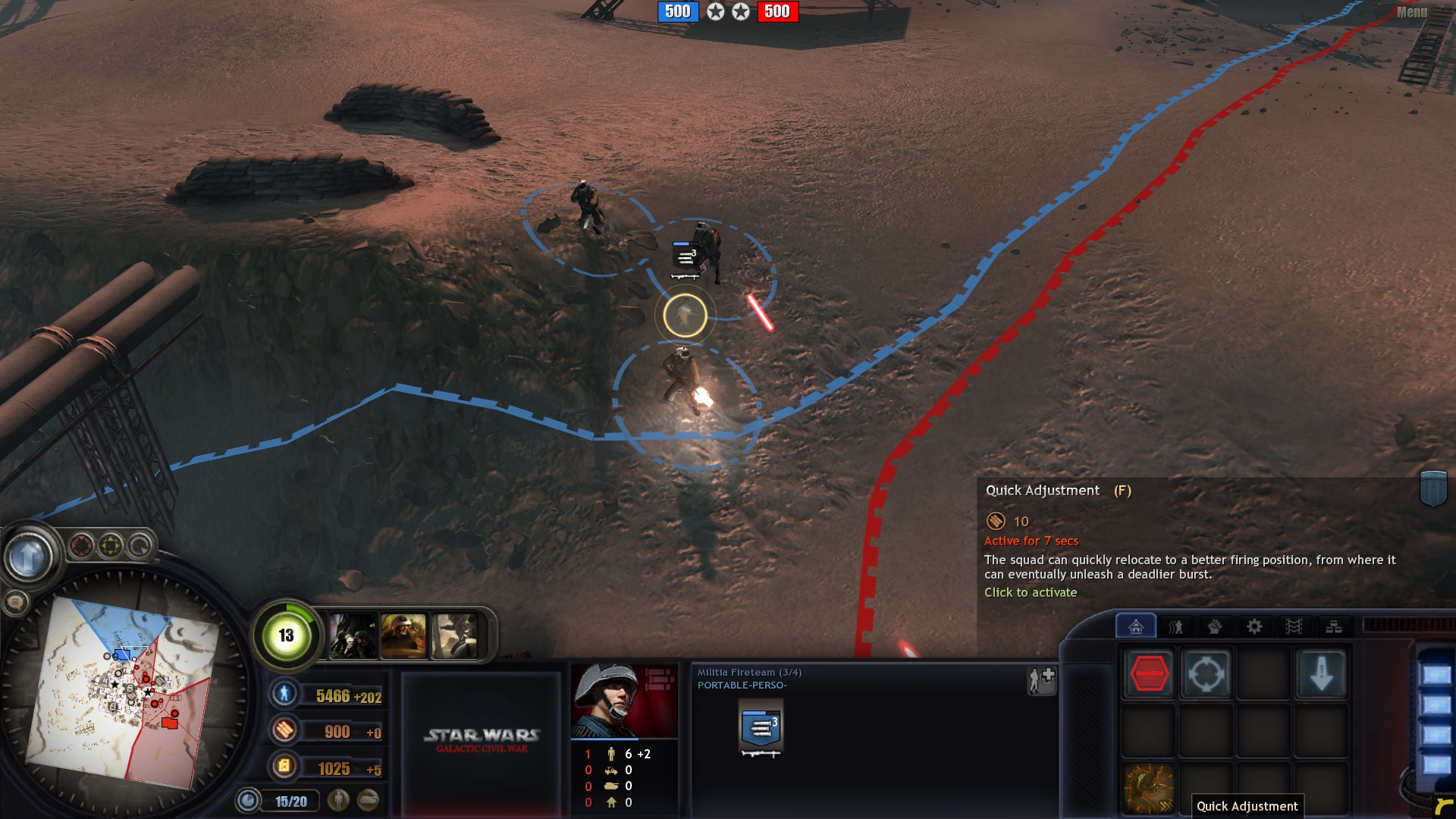 The DLT-19 is nothing new in itself. Choosing it turns the squad back into a suppressing MG role. Careful Progression gets replaced by the original Quick Adjustment, a short sprint followed by an extra-powered salvo.

It made perfect sense to conserve this ability for the DLT-19 as it magnifies its rate of fire and allows the squad to move quickly, a big plus for a MG (and very fitting of the rebel archetype). 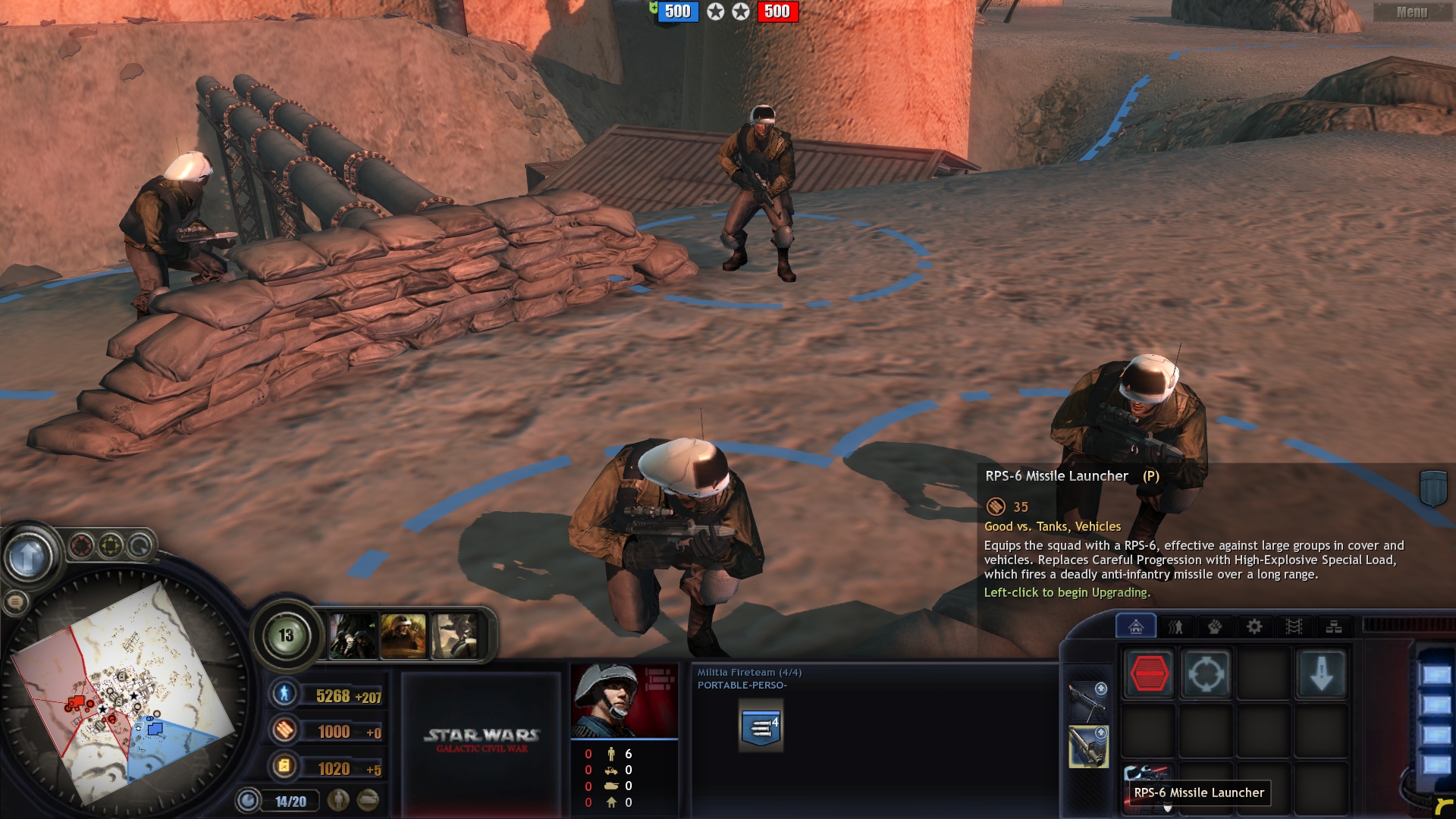 The RPS-6 on the other hand is a brand new weapon we have only showcased on our Discord (link at the end !) and it packs a punch, either against soldiers in hard cover, or vehicles (yes, some will be coming).

Moreover, it comes with a game changer ability to replace Careful Progression : you can load it with a High Explosive long range missile extremely deadly against large infantry groups, effectively granting the Rebels the much needed frag grenade they were lacking. With the huge benefit of having it as a missile (main downside is its minimum range) ! 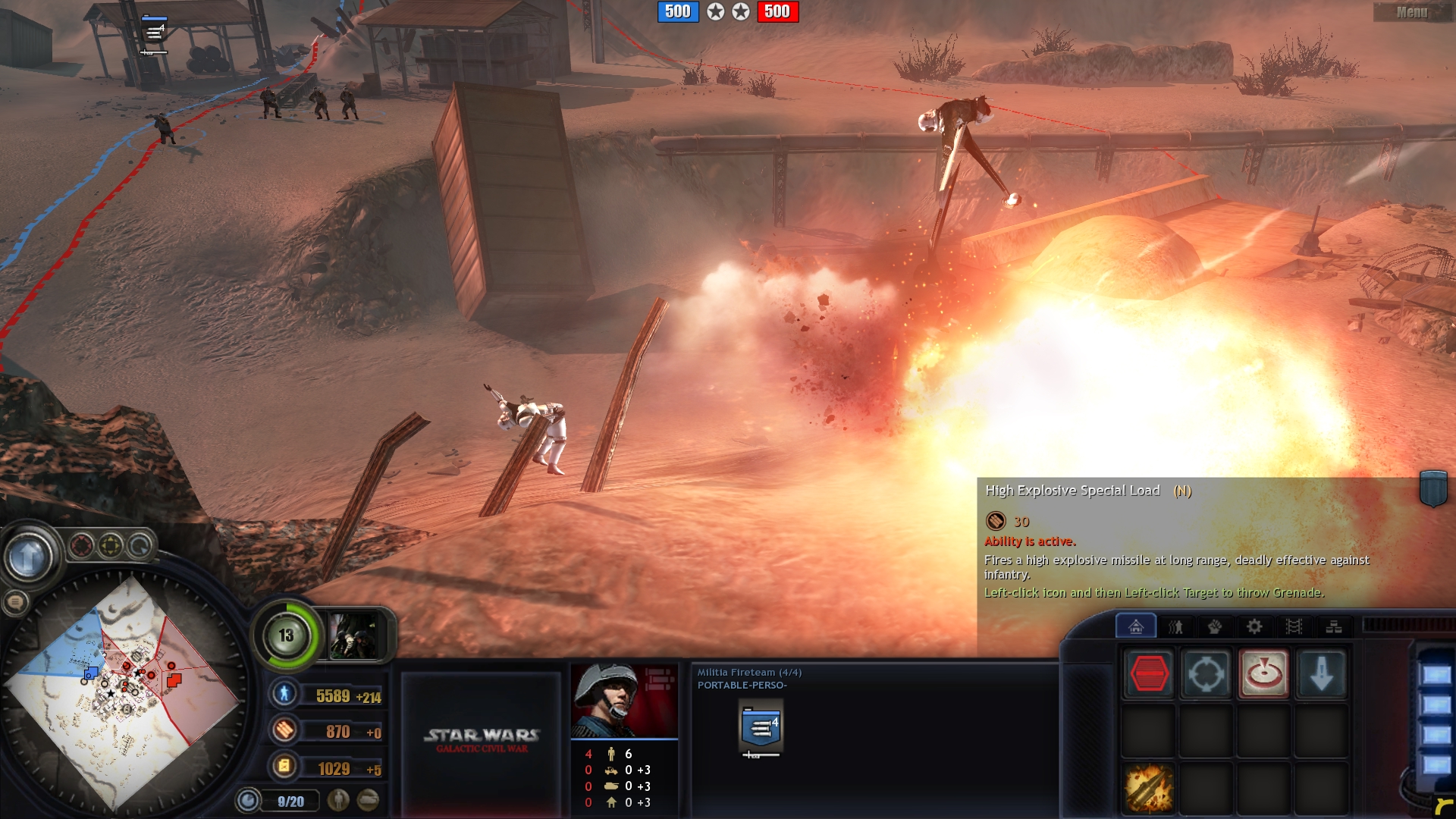 In either case, the Fireteam loses Careful Progression, turning into an assumed support team instead of its more versatile rifle squad role. This is a choice for the player to make !

All these changes are contributing to make the mod stand out as more than just a Star Wars skin for CoH, and bring complex design issues and solutions to the game. I hope you are with us on this policy !

This is it. A shout-out to the Edain Mod team (one of the greatest mod ever made) that inspired me for this game design-related diary. I hope you liked this kind of format, and if it sparks discussion, you are very welcome in the comments or (even better) on Discord !

Thanks for your patience and support, and as always,

Join the Discord for sneakpeaks : Discord.gg !

It's happening ! Download and play the first Star Wars mod ever for Company of Heroes !

End of a Year

To celebrate 2017, discover exclusive images of the last work in progress features, and know more of what you will get to play.

Watch the first trailer of StarWars Frontlines and support us for MOTY 2017 !

This is the first important SITREP about the mod. It sums up what we've done and what we're planning to do. And features a few in game pictures and explanations...

It's happening ! Download and play the first Star Wars mod for Company of Heroes ! There is a Readme file included in the download that will provide you...

This mod is dead?

i dont think so

can one of you let me how I install this

Curious how the progress is going gents!