Do you want to fight with your friend again another team ? Avatar : The Probending Game is an adaption of the anim : Avatar : Legend of Korra. It's a third person game and an action game.

A couple of things about the game

A couple of things about the gameThis

game, as you may have noticed, is based on the Avatar The Legend of Korra theme. It is a fan-made project which will put you in the place of probending players and make you fight against real players of the whole world. The game has been developed with Unreal Development Kit and is totally online.

As you know, if you are a LOK fan, probending is a sport in which there are rules the player have to follow. 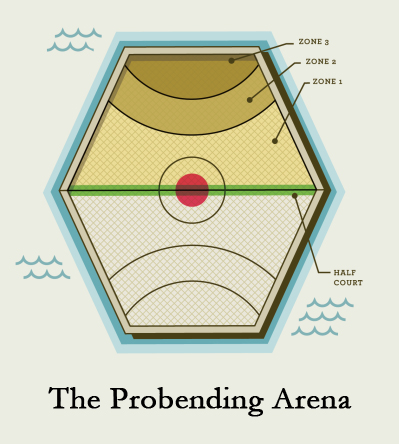 Faults:
Stepping over a line: “foot fault”. Intentionally hitting the referee stand, the referee, or the audience stands.Knocking a player over the ropesThe player will have to move back one zone.
These are the original rules. In the game, we added Airbending, so a team is composed of three players, no matter their element.

Will the project be only composed of Probending matches?

Probending is the first step of the staircase we want to build. At the beginning, you will only be able to play matches online versus other players, but later, the goal is for us, to develop a part of Republic City and include a solo part, but still online, in which the City will be full of discoveries, quests, street matches… Our ambition is to make you, players, have fun and enjoy the game as much as possible.So, we hope that as one goes along, the game will be more fascinating, that these improvements will change, in good, your game experience. Of course, you will be informed a bout it on this website in the tab “news”

Why is there Airbenders whereas in the cartoon, there aren’t?

The team wanted to let people choose whatever they liked. We think many players are found of airbending and we didn’t want to put them apart, we wanted to make everything possible, it included Airbending. Without spoiling, we added this because the game context is not really the one of the cartoon; we placed the story thirty years after the equalists crisis.

What about the different elements?

Fire :Firebenders have an intensive attack and a good mobility which permit them to dodge more or less efficiently.
Water :Water is the most multi-skilled. Water shield doesn’t really protect efficiently, but the counter-attacks are powerful.
Air :Airbending is very dynamic so not very powerful, but you can avoid attacks very easily : it is the best to not undergo damages. Earth :An earthbender attacks with an earth disc which is very powerful if he stays well placed. This disc can be used as a shield : a very good way to counter attacks.
We tried to balance all the elements. Logically, none is more powerful than another. Each has qualities and defaults and we stayed the closest possible from the characteristics of each element in the cartoon.

Will my character become better and better?

Indeed, in order to make the game as interesting as possible we included a leveling system based on experience points. These points will be delivered by winning matches of course, but when the game will be more developed; accomplishing quests or events will give you that precious experience. Levels won’t be there for nothing, your character will become multi-skilled because you will be allowed to choose competences to upgrade, to unlock. The system will be based on meritocracy, to become better, you first have to train, and all characters will be different, because you are the only master of your choices.

What about teams and solo?

The game is played with teams. We are aware that as a new player, you probably won’t have a team at the very beginning so there will be different kind of matches. Solo match: It is when you want to play without a preformed team. Your teammates will be chosen randomly.Team match: When you want to play with your team.Tournaments: Once a week, teams will be able to confront in a huge tournament in the arena. It will be the opportunity to see which team is the champion of the week, who are the best players.

It is possible for the player to change game options like graphics, sound but for the moment not the commands. The player can also choose the character he wants to incarnate, practically create it. Unfortunately, it is not possible to play one character of the cartoon.

Will there be a social platform?For the moment, in prodending matches, players have to manage to speak together using Skype, TS or Mumble. If the game is improved, as we would like, maybe there will be possibilities for players to meet in a café or a bar or anything else to speak about their matches and the quests they accomplished or met future teammates.

The player doesn’t have to click on an icon to enable an attack/action, there are several ones that can be activated by using the keyboard and mouse, like in TES or Assassin’s Creed.

Will the game be free-to-play ?

Of course. It is a fan-made project and it is important to us that the game can be found free on the Internet.

The rules of play of the probending game. learn all about it

How work the Game ? You want to know what is this game and what it has to offer?

Configure Your PC to play on multiplayer

IS THIS OUT YET

how far are they

Thanks for the update

Tags
Embed Buttons
Link to The Probending Game by selecting a button and using the embed code provided more...