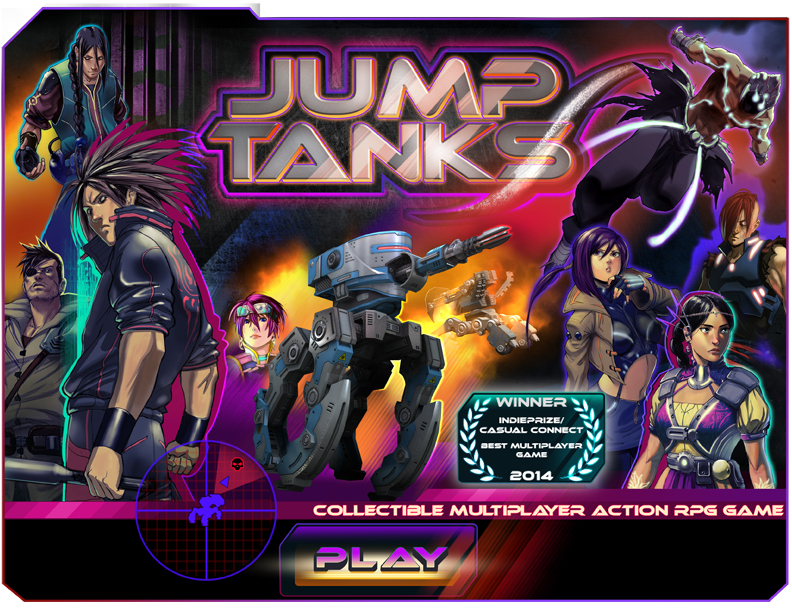 Jump Tanks re-imagines the feeling of heart pounding action found in classic Japanese shooters. Dodge and weave through incoming laser blasts and mortar shots while returning your own volleys of attacks. Use the shields on the front of the tanks to block attacks and wait for just the right moment to raise it and blast your opponent into shrapnel. Leap from 90 story buildings and perform a jump crush attack on unsuspecting foes below. Out maneuver barrages of heat-seeking missiles while you charge up your cannon and get ready to release your own personal bullet hell

You know about the basics of choosing your weapons, but we haven't yet elaborated on some of the more specific features of them. To celebrate the activation of a new weapon in the Pre-Alpha Preview, we've decided to elaborate on some weapons and weapon-types that will be available later!

Jump Tanks has a standard aim style that uses the crosshair, allowing the player to aim wherever they want to fire. Some guns also use "Aim Assist" on the vertical axis, which allows the player to focus more on maneuvering quickly while firing. Further, there are also guns that have a tighter view that is used for "sniper" style weapons, such as Rail Guns etc... These allow for higher accuracy over long distances but with a trade off in awareness around the player.

The final aiming style is "Launched". The type of weapon that uses this aiming style will make things explode. Launched weapons paint a target on the ground that the player can aim. When the player fires their weapon, it will lob the projectile in an arc towards the target. This system allows players to attack while hiding behind cover, but the trade off is in the speed the projectile reaches the target.

This week, players in the Pre-Alpha Preview will be able to test out the flamethrower! So, if you are interested in getting in on some early tank-crushing, testing out the newest tank tech and having a good time with the MBS Team, go to our Pre-Alpha Preview Sign up page and give us your email! It's the only way to furnish you with a key! As always, if you have comments, suggestions, thoughts, ideas, gripes or grumbles, leave them below for us to read! Thanks for reading and keep on crushin'!

The Style of Jump Tanks

In which Casey explains some of the elements of Jump Tanks' style and what helped inspire the game!

How Hunters Up the Ante!

This week we describes the Hunter mode of gameplay and the game-changing tactics they're capable of fueling!

Here is the latest gameplay trailer and an invite to sign up to play the JumpTanks on our newly launched website.

Each battle is personal with the Ally and Rival System

This week we look at the Rival and Ally system, and how they influence how players interact and coordinate strategies in the heat of battle!