The Apexicon has since been passed down through early society, cavemen, and the like, bestowing language and words upon man, so that he may express himself in an easier fashion than gestures and drawings. This book was highly coveted until it was lost in the War of Punctuation. Take up the pen, use your finger to select letters, and find out the mystery behind this lost artifact as you deal damage with the words collected from your imagination. The only limit is what words you see in the letters before you. Delve deep into an RPG system added to addicting puzzle gameplay. Fight, Spell, Play.

Thanks for voting and helping APEXICON - Fantasy Puzzle Combat on it's quest to become the 2022 Indie of the Year. You are now in with a chance to score some free games. Help this game secure more votes by embedding the widget (or link) we have included below on your favorite sites.

This is a once in a lifetime opportunity (at least from us here at Actos Games)!

Starting today, anyone who upgrades or backs at the $23 (Mini-Collector's Edition Tier) or higher will get THERMOBIRD (for mobiles) and TITANOMACHIA (Our upcoming game based on Shadow of the Colossus for PS2) for FREE. That's right. We're so trustworthy of you fans that we're willing to give away two more games as we develop them!

What if I already have backed at $23 or higher?
Then you get the same deal!

What if I want to upgrade from my early bird $12?

It's only $11 more to the Mini-Collector's, plus you get all the sweet swag!

What is THERMOBIRD? What is TITANOMACHIA?

THERMOBIRD is our exclusive mobile title, that will have you playing easy controls to help Thermobird reach his girlfriend, Thermobirdie, and both migrate farther south than the harsh colds of Major City! 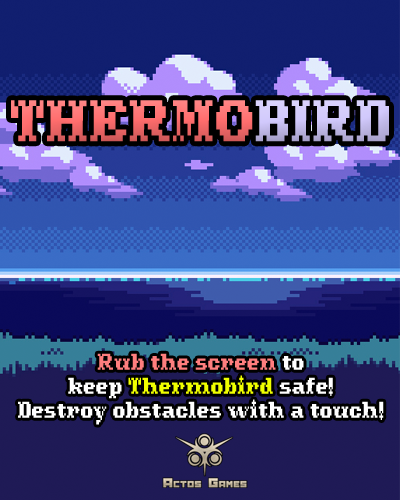 TITANOMACHIA, however, is still in deep design at this stage. It's our next big project, but we'll guarantee you'll get in on the ground floor.

Just like the name implies and the Shadow of the Colossus reference, we're aiming TITANIC with this future game. We'll share more info on it as we can announce later.

Any questions and comments, please put in the comments below, and we'll be sure to answer them!

We've launched, and we're already nearing half of our goal! More info inside!

Apexicon's Kickstarter is finally here, so get ready for awesomeness!

This will be the last update for APEXICON before the Kickstarter launches on February 17th! Come see what's new!~

Come inside to check out the new video for APEXICON, plus new images!

It's the demo! Download it and try it for yourself! Mouse is all you need, with some keyboardin'.

We're proud to announce the Kickstarter and Alpha will be launching on Monday, March 24th!

We'll be launching the second Kickstarter soon, so please keep watching! We're almost finished with the Kickstarter video for the page.

Hey thanks! I've always wanted a game where you had more control over how you were doing damage, and making this seems a great fit.

Castle in the Clouds Cinematic