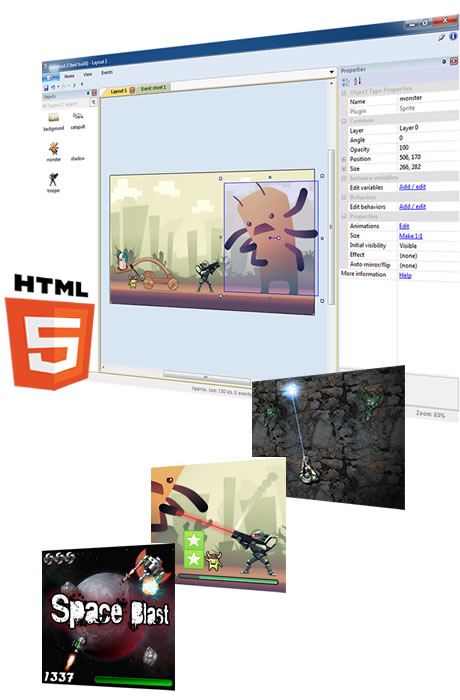 Construct 2 initially only exports to HTML5, but more export formats are going to be supported in the future such as EXE and possibly native mobile applications. Construct 2 is mainly for 2D game development. It aims to open the doors of game making to everyone by presenting making games in a visual and intuitive way.

Scirra has released a couple of fully playable and functional HTML5 demos. The project files for these demos can also be downloaded and experimented with.

There are currently three versions of Construct 2, the free edition, the standard early adopter and the business early adopter. The free version comes bundled with free music, sound effects, ambient sounds and animated sprites. The paid editions release a few restrictions the free version places and also come with far more resources to use in your games.

Scirra's website has lots of tutorials and their forum is very active.

A game with Musical Scale Mechanic and "In level" Memory Puzzle

This project started in the #musicgamejam a year ago.

The mechanic of Platforms inside a Musical Scale is not easy for players, so the game needed a lot of feedback so anyone could pass even if they don't understand scales.

The movement powers were the most difficult part to program. Player can dash, slow the time and FLY and combine all that while going through the level, with means, bugs! But after a lot of effort on fixing problems, it is well polished and working fine!

Each level has a different Musical Scale, starting with the easiest one, C major.

If the player jump in a platform that is out of scale, he falls! But I need to evolve this mechanic, so I made platforms move in the scale or that make you automatically jump, there are six types of platforms and a bunch of other mechanics.

And there is the challenges mechanics in the levels, like a bunch of lasers, moving spikes, and strange eyes that follows you!

Here is a video to show a bit of Final Scale! Available on Steam. 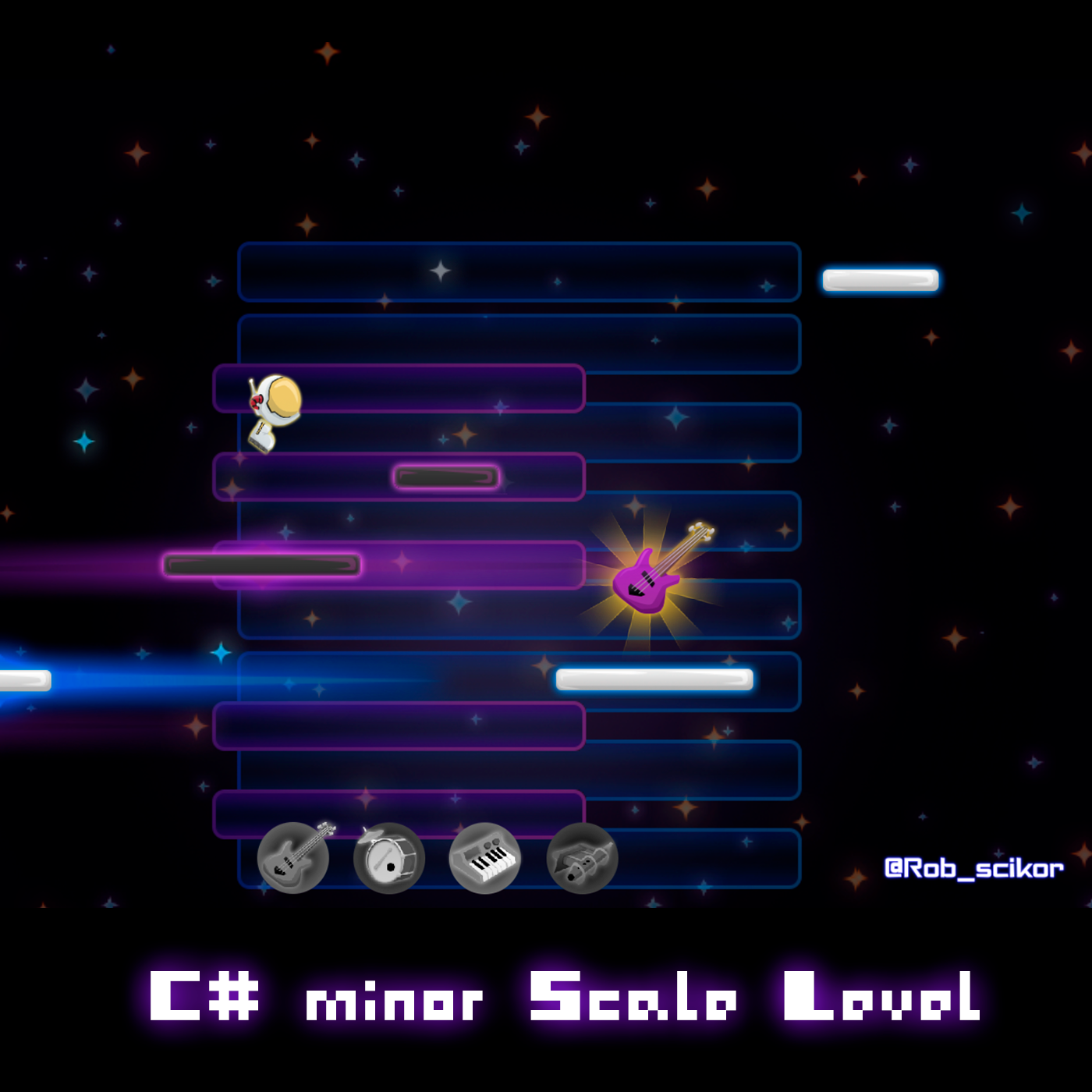 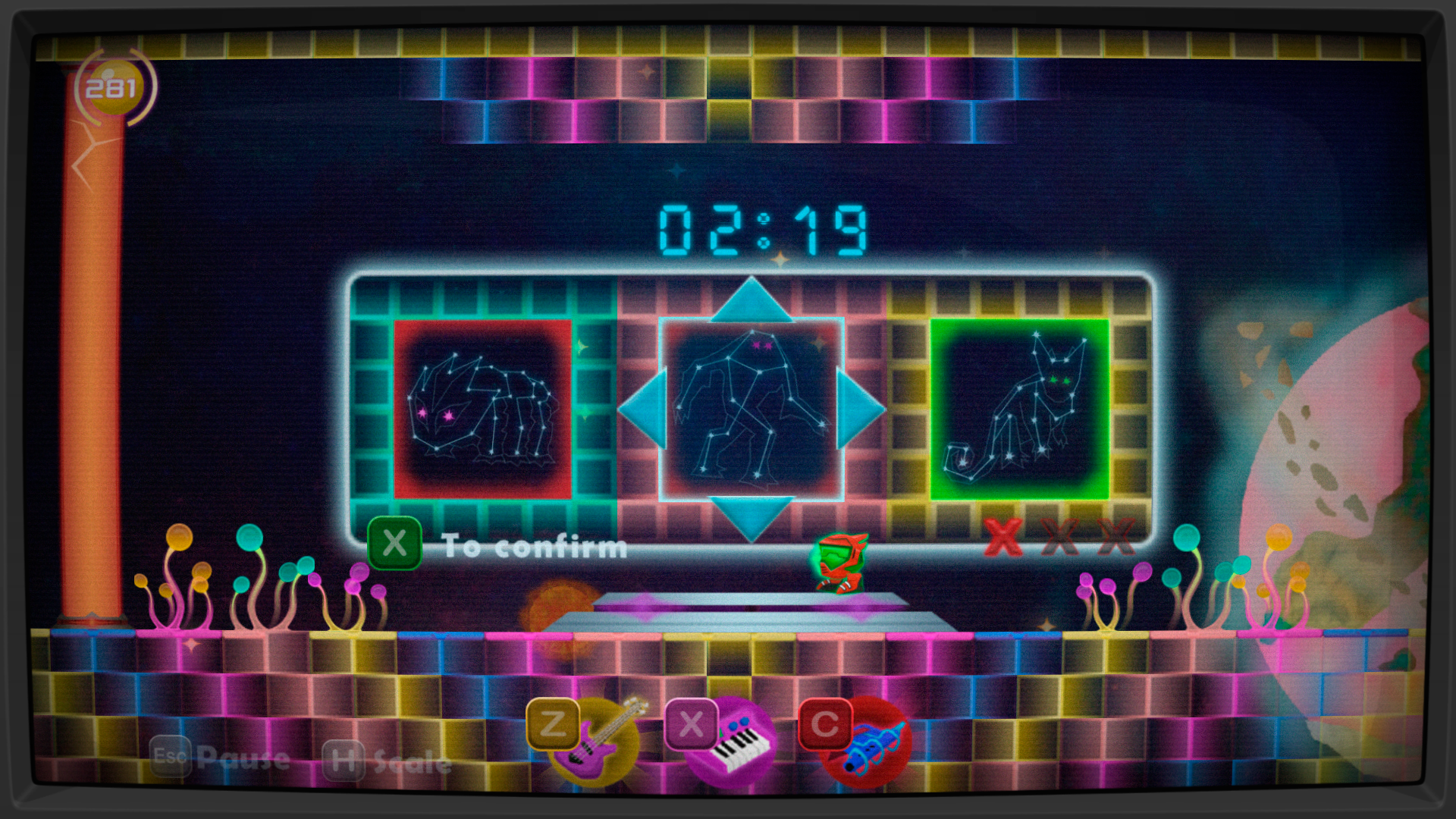 Here is some Links: 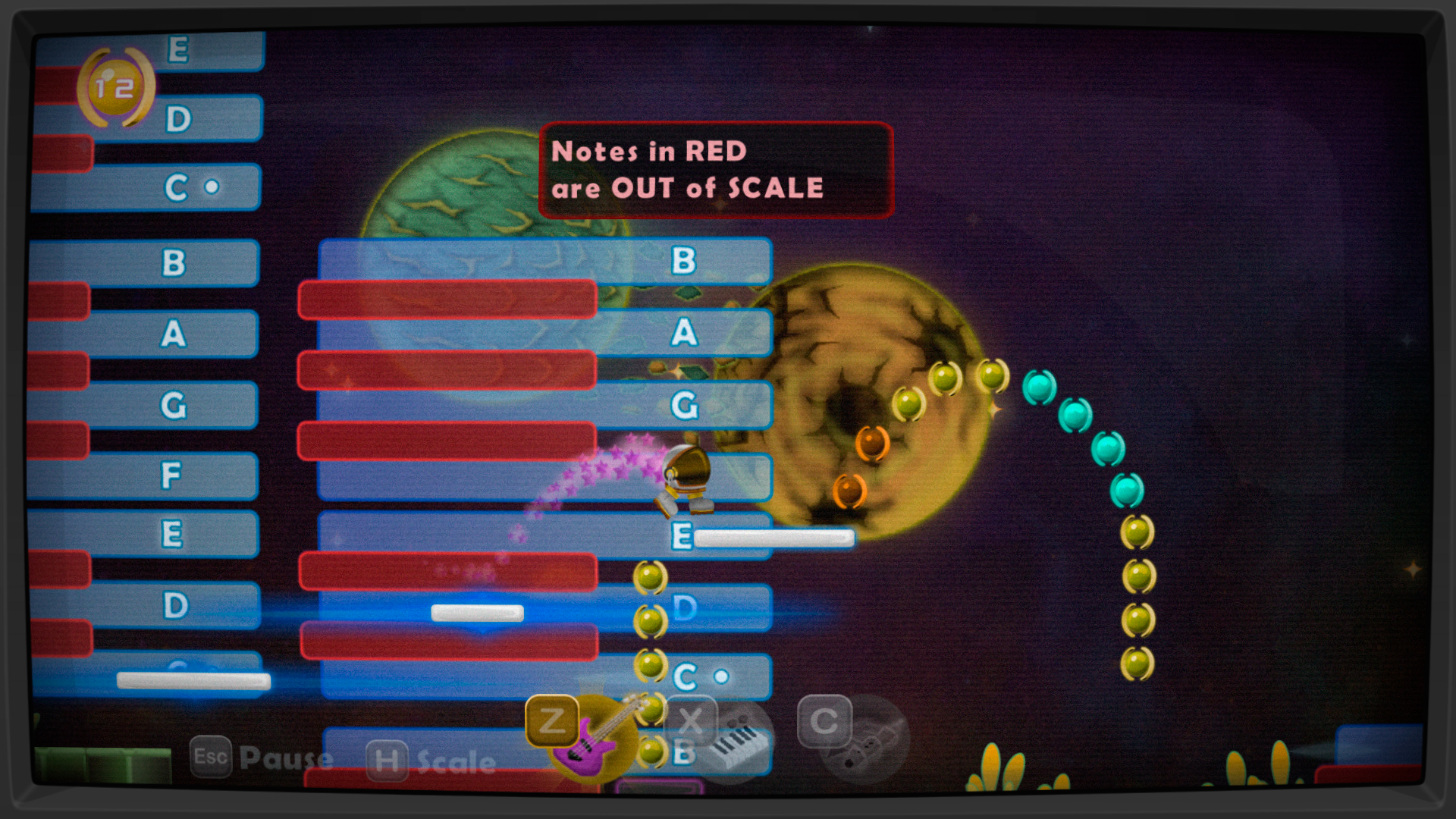 Snouty Plays's third game -- Alien Step, a grid-based action puzzler, is now updated to ver1.0 and is available on Kongregate!

Two new features and the story behind them. Also an overview of the programming logic of these features.

New Trailer for Dave-Man is out and the Steam page is live! Also, some additional screenshots and updates.

MISC updates on Dave-Man including screenshots, gifs, and videos.

A lost astronaut must find the seven Crystals, which can solve the mysterious meteor it has found. To do this he must overcome challenges on unknown planets...

Play as over 100 heroes for free, right in your browser.

Blades of Gory is a 2D versus fighting game that is easy to learn and hard to master. Choose from 8 fierce warriors. 4 game modes. Arcade: Defeat all...

Verdant Village is a fantasy life simulation game. Explore the massive Empyrean Vale. There are crops to tend, ore to mine, fish to catch, and secrets...

Play As A Dungeon Raider in this Platformer Features: Attackrate upgrade both for player and Monsters each Level.

Ninjapple is a 2D platformer taking place in Fruit'land. Someone wants to use the five elements to control the world and created an army of vegetables...

Crystal Wars - Origins is a game where the player must explore planets and extract the powerful blue crystals with his weapon, but it will not be so easy...

CRATER HOUNDS is a roguelite twinstick shooter that has you battle through a cosmic catastrophe, invoke mighty Mechs and blast your way through hordes...

Simulation game where you run your own hardware company, influence the market and compete with other companies to stay up-to-date or revolutionize the...

Hello All.
Somebody should update the "Platforms" supported by the engine.
I add a game in SlideDB and the was no construct 2 option because there no Android support for it.
Please update :)

What does it mean when it says it only exports in HTML5?

I love this engine!, is very fast for created game!

it look easier than mmf2 xDDD

Okay, ever since the little trail that resulted from my first comment -- I take no issue with Construct 2, it just sort of came out of nowhere (at least for me). I hope you guys succeed with it, and maybe even manage to get within the realm of 3D games.

I'm still going to be using Construct Classic, but I wish you guys all the best.

Correct me if I'm wrong -- but wasn't Construct made to be an open source engine?

Construct and Construct 2 are not the same thing.

We have Construct Classic, and open source game making engine.

We have since written a new engine from the ground up, Construct 2, which isn't open source.

They are both very distinct.

They probably thought they could change that by adding a "2" at the end :c

We added a 2 to the end because it's our second game engine! They are not the same product.

You are a ******* idiot. Construct 1 was mostly in c++ and this is now in html5 and javascript (making it web compatible). So basically its a whole new engine.

Construct 1 is still FREE and OPEN-SOURCE .... so i don't see the big hoey about the fact that they want to make a profit out of a new web compatible version .

Exactly , at least people can still use the open source one for free and commercial use , The second one is more for web-use , i don't like web games :(

You can use Construct 2 for commercial use too!