I remastered Amnesia: The Dark Descent - this is the process simplified.

Original Amnesia textures aren't bad at all. They actually are as good as they possibly could have been back in 2010, running on older machines. But things have changed.
My first step to remaster Amnesia were the textures. Back then in 2016 when I first got this foolish Idea in my head - there were no ways of upscaling textures available for me. So I hade to improvise:

Photoshop upscale and overlays
This was my earliest technique of "upscaling". Open up a texture (I'll be using castlebase_floor.dds from Amnesia). Once opened press Ctrl+Alt+I and change the size from 512 to 1024. This will double it size, but won't add any detail.
To add detail open up any other texture I will be using:
Mb3d.co.uk
Add it on top of the texture you want to "upscale" and change the blending to "soft light"
DONE. 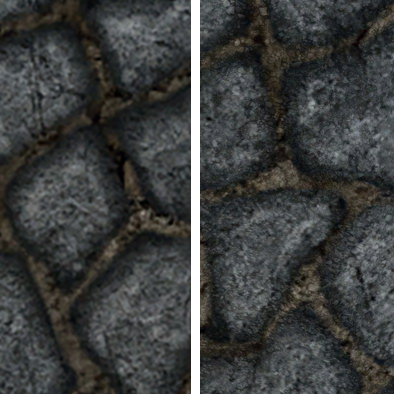 LEFT - original. RIGHT - overlayed. You can see this kinda works, and if uspcaling didn't become a thing this would be the way I would do it.

Upscaling using software
This is the go-to way of remastering textures. The texture stays as true to the original as possible and the results are amazing 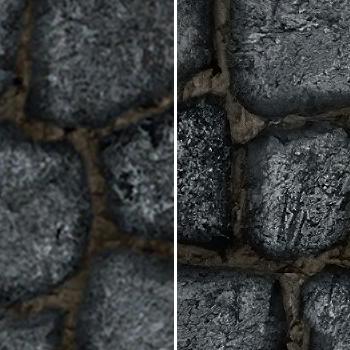 LEFT - original. RIGHT - upscaled. For this technique I used Topaz Gigapixel AI. When I first saw upscaling software I was mind-blown, and the first thing that came to my mind was to upscale Amnesia.

Remaking textures
Even though, this textures looking great. It wasn't changing the game enough to be called a remaster. If this was Amnesia: The Dark Descent - Upscaled then yes, this would do.
I actually upscaled all the textures before I started to remake some of them. To remake a texture I either used a pre-existing texture, color-correct it, adjusted the levels so it matched the original texture or I used a PBR material.

And I actually replaced this texture in game with a PBR material:

Now I was happy with the end result. Since PBR are real life surfaces, they look more real and by adjusting the color I managed to not deviate from the original feel. This is how it looks in game: 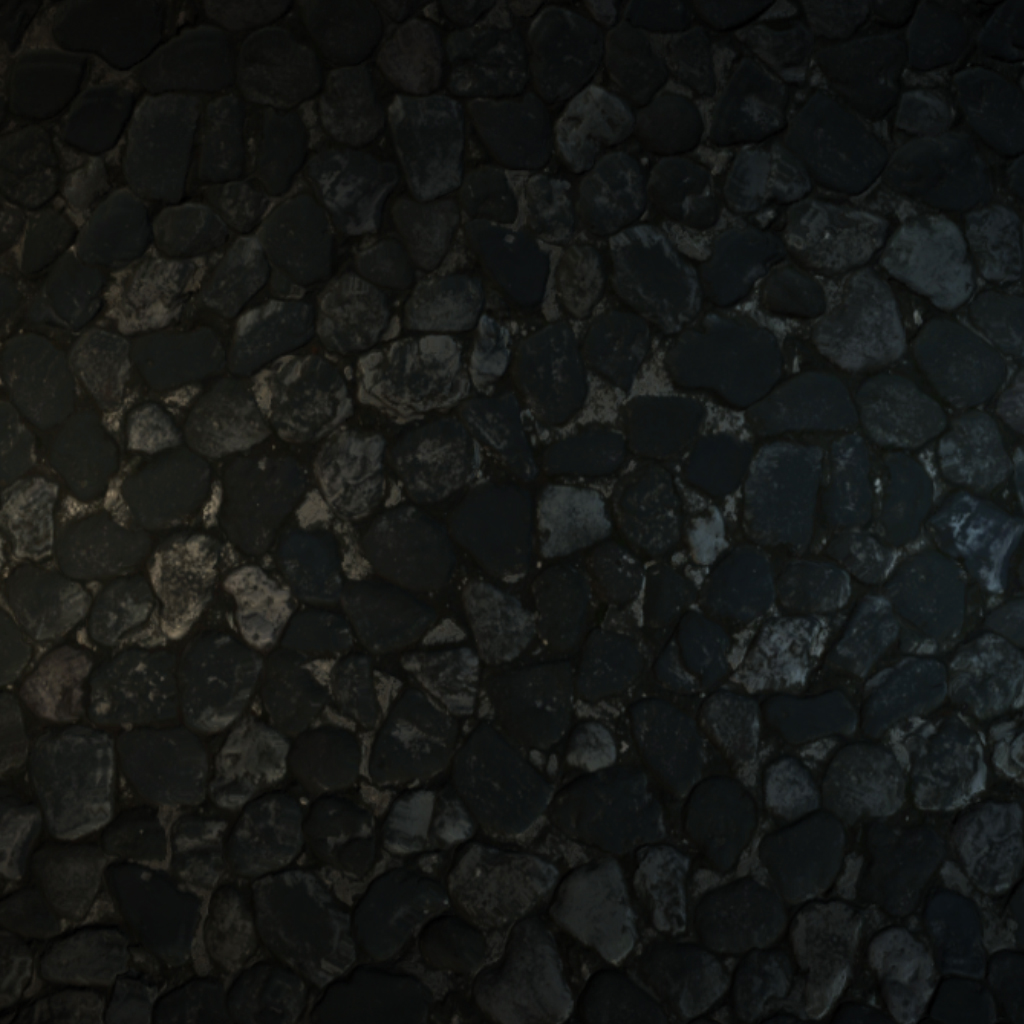 Ok so now I had to upscale every single texture of every single static object, entity and particle system there is. And when I was done upscaling, I had to make normal, specular and height maps for every single upscaled texture. If you wonder how much work that is: (i won't be counting other textures, only objects)
626 static object textures
1527 entity textures
In total: ‭2 153‬ textures

I suggest you watch 3kliksphilip's video:
Youtube.com
he is an upscaling addict.

This was something I experimented with a lot.

I've tried reShade, which has an anoying pop up everytime the games is launched

I've also tried using the edited shaders by a member of this community
Moddb.com I actually ended up using one texture from that, so thanks Stayd!

But what I ended up doing is actually copying shaders from Machine for Pigs. These shaders don't blow out the whites as the TDD's do.

But the most interesting and most graphics changing is the 3D parallax shader.

So now the textures are done. We have awesome new textures, either upscaled or redone. We also got them looking awesome thanks to the parallax effect.

1. Make a white blank texture and port it to Amnesia material editor. 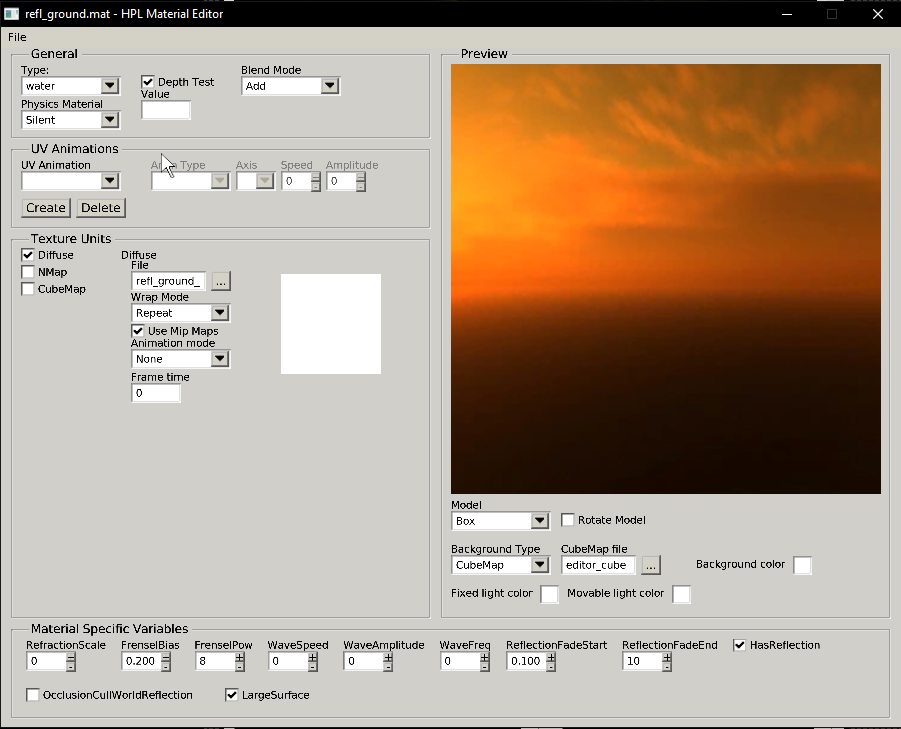 Using these exact settings, you can make an invisible material that reflects everything around it.

2. Choose a place where you want your floor to be reflective 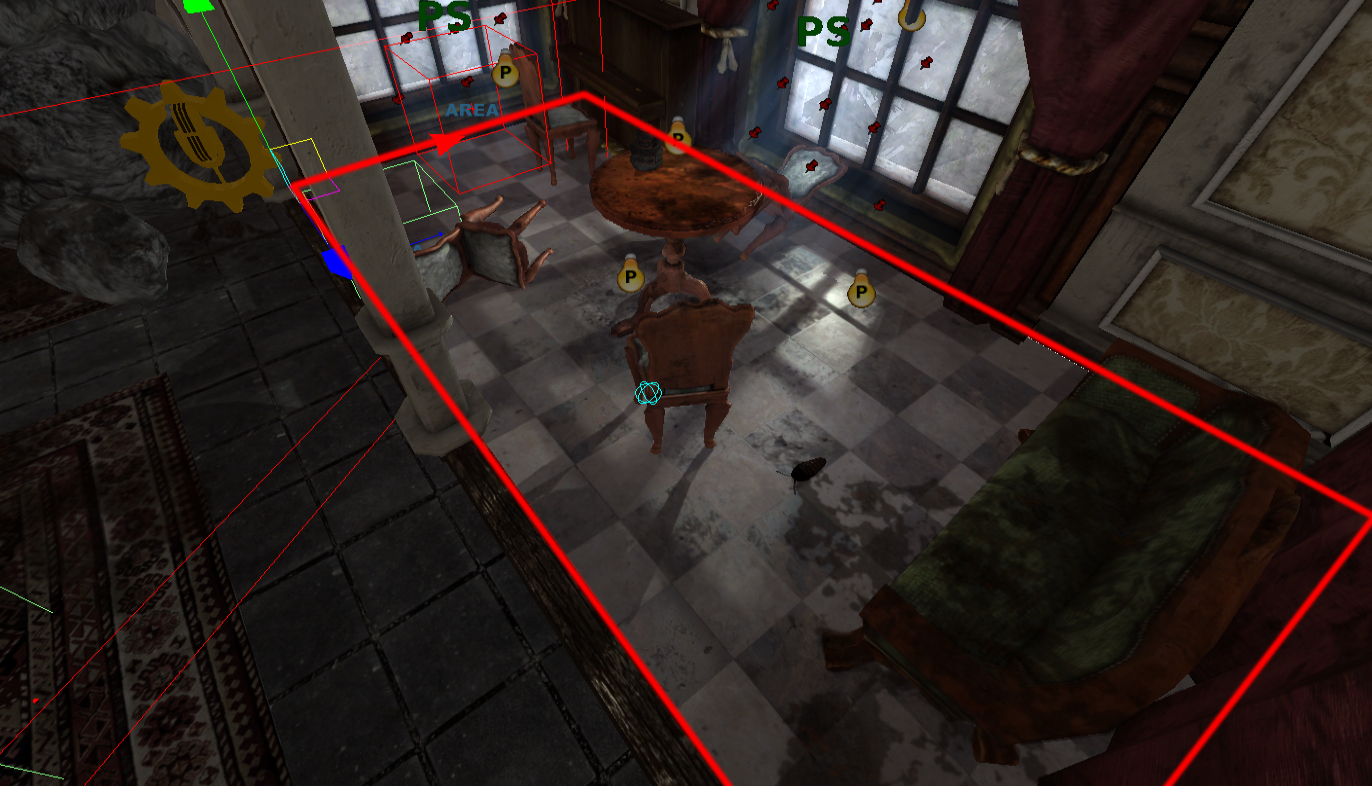 I chose this floor. Now let's make this floor reflect inside the game. To do it - have the floor selected and press Ctrl+D to duplicate it. now just change the material to the reflective one we made above.

Now you should have your floor and a reflective, invisible material on top. 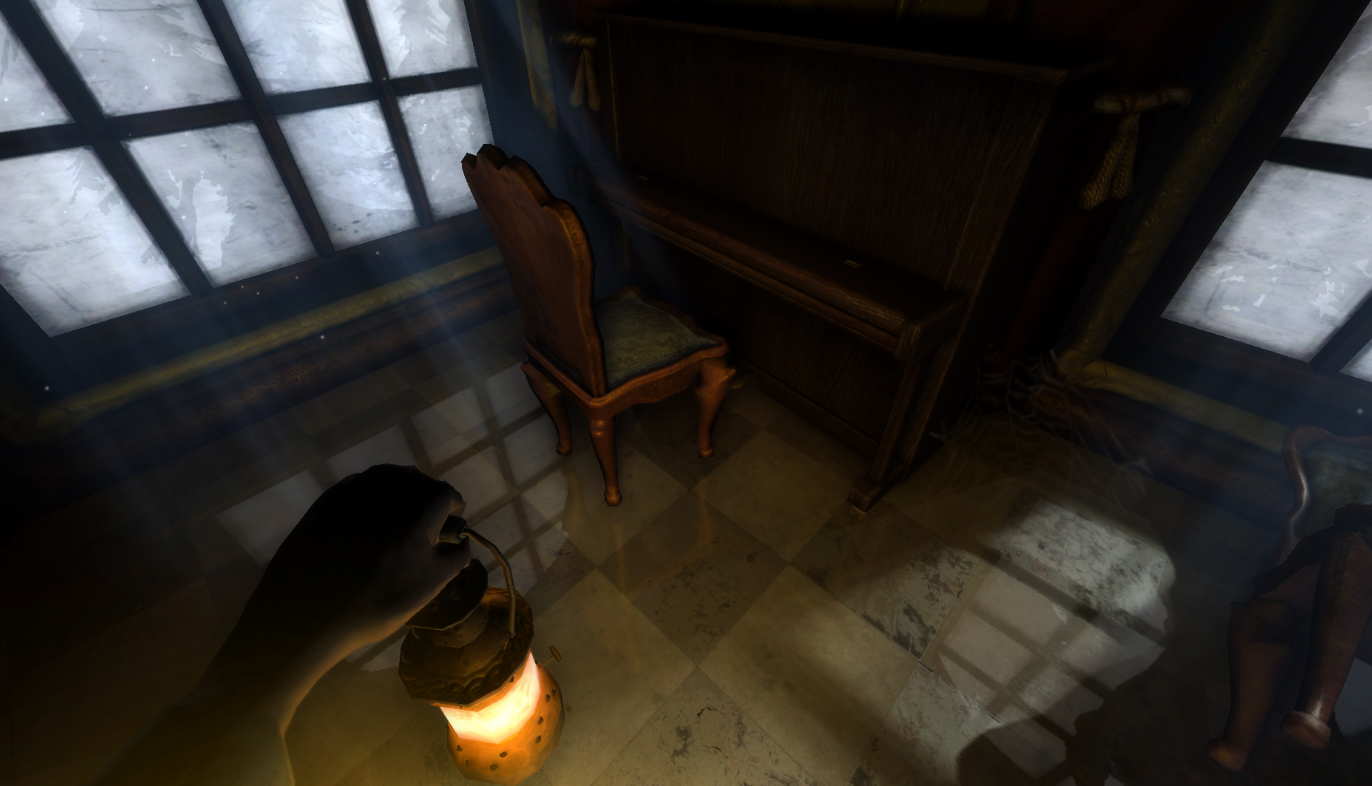 And boom, our floor is now reflecting surrounding areas. It's very demanding, thats why I decided to use it so little on such a small surface. Also use it on floor that make sense, wood for example wouldn't be able to give off such a sharp reflection, but this marble floor works fine.

When I had all the textures done, I still didn't feel it changed the game much. The HD textures are only visible from a close distance.

To make the Brenneburg castle feel more like a place I made the windows seethrough. And how did I do that? I changed the original window texture from a solid material into either translucent material or even better... water.

Using water material as windows allows me to give the window a realistic reflection as well as being translucent.

Now that the windows are translucent, I added an outside scene behind every single window in the game. So you can have a better look at the Prussian forest, but don't get too close otherwise the interior reflection will cover your view.

Blocked off cave-ins
Ever wondered what's behind the blocked off areas? Well I added little gaps in between the rocks, so you can see where the corridors originally lead. 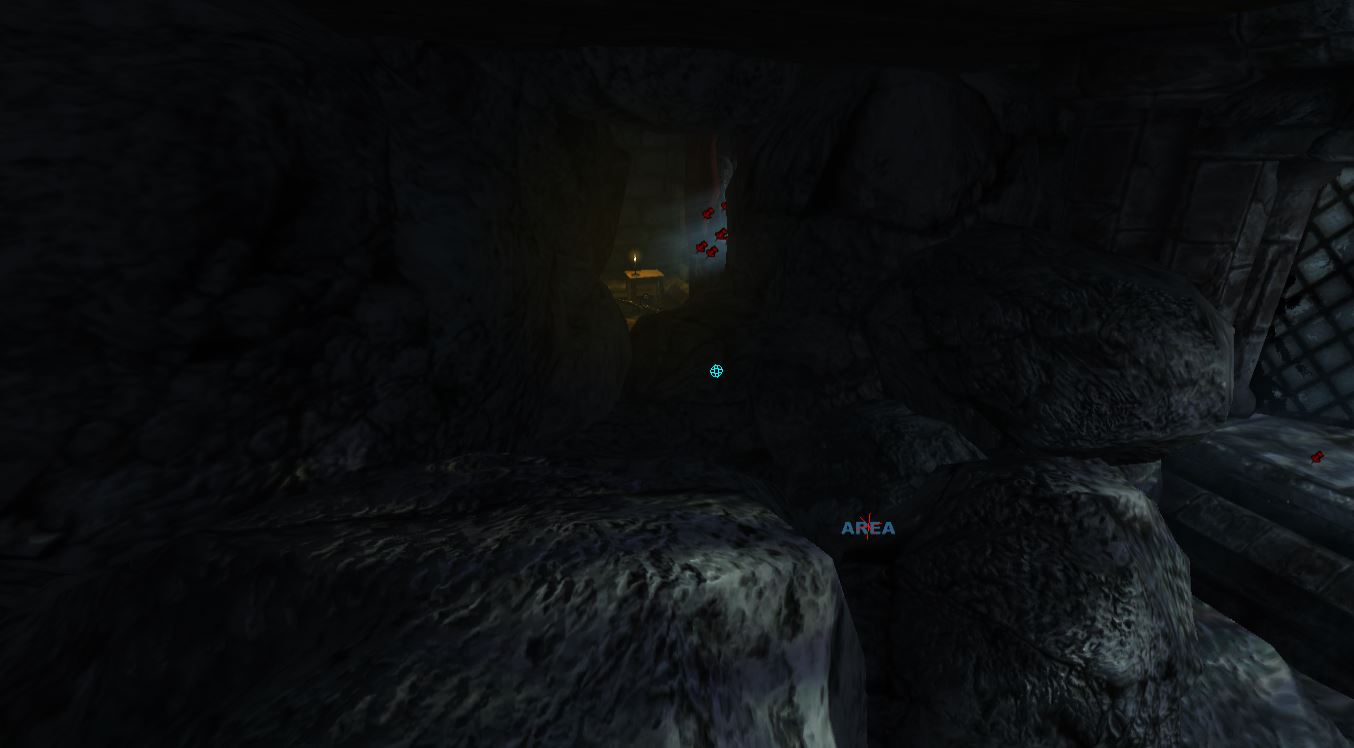 This with the outside areas is a great addition to the game in my opinion. It makes the castle feel like a real place, without deviating from the original game too much.

The lighting
The lighting was already good in Amnesia, but there were improvements i could make. First, the candles and other lightsources cast realtime shadows. 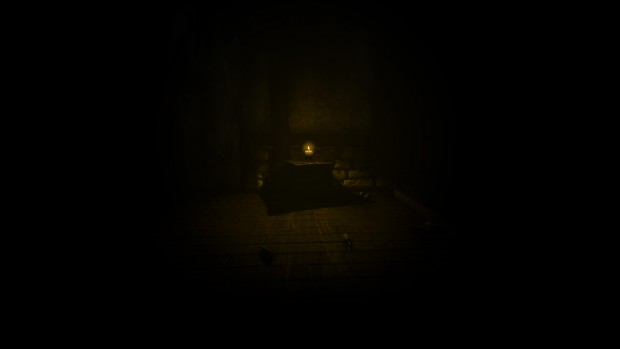 And the one I like the most. Smoke and dust is now affected by light level.

Now you can only see the smoke and dust if there's light. This wasn't the case in Amnesia. The dust and smoke would just be always visible even in complete darkness. This makes the lighting look more dynamic and important in the levels as well as the particle effects more realistic.

There are a LOT more improvements in the game. Like more breakable objects, more interactable objects etc. But I wanted to showcase the ones that made the most impact and were the most important.

If you like the work I did, you can either donate or rate this mod or write a comment etc. etc.
And of course thank you for your time!

"If you like the work I did, you can either donate or rate this mod or write a comment etc. etc."

did you make this for donations or for reaching a personal goal of yours that you had for many years?

Stop bulshitting, if you don't want to donate - don't, somebody else might want to.

Wait, so I can't ask for support under a personal goal of mine I had for many years?

And of course, good luck with the donations.

See, this is why this community can't have nice things. Man takes 4 years to make something actually impressive and some people immediately act like apes over a donation link, completely missing the work itself.

It really baffles me how people will nut over mediocre "original" mods and defend the hell out of anyone who dares to say anything about them, but also whine about someone asking for support when they have done their due diligence.

Now that being said, I have modded this engine for years and wasn't expecting to ever learn anything new about it. Some of this stuff surprised me though - e.g. I have never thought of copying the MFP shaders. And once again, great job on the particle-light thing.

it really baffles me how people will wring themselves into emotional knots over a polite and respectful question, seemingly inferring all kinds of toxicity into it. that only speaks ill for those who think these things...

i suppose many are simply stressed out over the viral epidemic so i forgive you.

Thanks for your benevolent forgiveness and a lesson about myself btw

Great work my man. Can't imagine the amount of time something like this might take, specially for just 1 person alone. Don't listen to what other dumbasses said about donations and ****, it's totally fine.

If I ever get to play Amnesia sometime again I'll have to use this mod.

Thanks very much for this interesting explanation/blog!

This looks so good! I'm gonna try it.

I never got to playing Amnesia,
because I wanted to play all the Penumbra series first,
and Penumbra: Requiem has AWFUL jumpy mouse acceleration issues for me
(maybe it's something to do with Windows 10, I don't know)
so I never got through it,
but now I've got new motivation to go back and suffer through it.
(Also the new Amnesia game coming!)

looks pretty neat dude, I hope one day I will be able to actually complete the game, its pretty spooky

Does this include all the other features of the enhanced shaders mod, like the Linear lighting and the cleaner SSAO? I know you mentioned it blows out the whites.