Smashball on Steam – should you get it? Read ModDB's take on smashing balls and hookers. No, really.

If there's one thing I'm not, it would be a sports fan. Even in my high school days, any attempt to embrace EA's bouquet of perennial franchises was mostly just to fit in with all my sports nuts friends. Upon seeing the Smashball logo — the typical silhouette blocked in with red and blue that all major American leagues have adopted — my initial reaction was one of disinterest. It wasn't until stumbling across one of the mod's videos of a recorded playtest that my curiosity took hold. Little did I know that Smashball's Steamworks release would offer solid gameplay and network features that make for an excellent first impression.

Smashball is a futuristic lethal contact sport in which two teams battle it out with superhuman abilities, grappling hooks and devastating firepower. The action is fast-paced and constantly back and forth. Each team has positions for goalie, fullbacks, halfbacks and forwards. Every position is loaded with different starting weaponry and stats. Forwards benefit from superior agility with less armor weighing them down while goalies occupy the opposite end of that spectrum. Players can also choose perks to further augment their abilities and tailor to their personal playstyle. 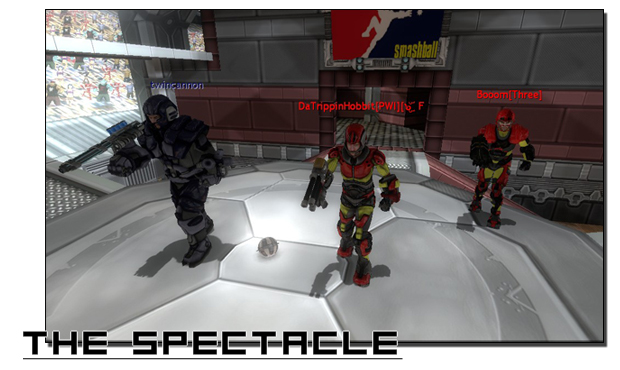 Aesthetically, Smashball's presentation subscribes to the kind of over-the-top spectacle of extreme sports that hearkens back to games like the Mutant League series and Smash TV. The UI is laid out in such a fashion that everything is shown as if you were watching the event on TV. The scoreboard and timer is always overlayed on top. Goals prompt statistical info about the the goalie and shooter involved. End of round matches provide game stats and list MVPs. I wouldn't be surprised if future additions opted in for smart-alec announcers to complete the feel. Player characters already have their own quips in game and the audience's collective cheers and sighs add a nice touch whenever you gain or lose possession of the ball.

The maps packaged with the Steamworks release are an improvement from previous versions. The level designers have stuck to the economical (yet slightly drab and metallic) track, keeping the background visual noise to a minimum so players can keep their head in the game. Removal of the majority of HL2 placeholder art in previous release really allows Smashball's personality to start shining through. 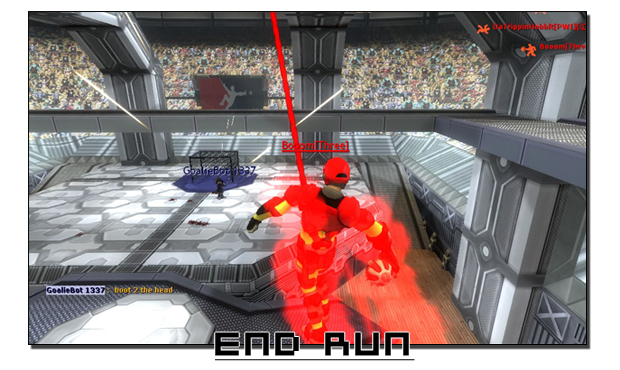 As far as gameplay, while still a little rough-hewn, it's a surprisingly well-developed marriage between combat and sport. The objective is simple, get the ball in the goal. The match never turns into just a regular deathmatch as most times running out of health just results in a temporary knockdown. Goalies never have to feel left out of the action either, as pressing a key allows players to spectate the ball while still in-game. The core concepts are simple, but there enough variation in the elements to make this mod a competitive and entertaining choice.

Skill mastery factors into appropriate use of the grappling hook and turbo. Experienced testers of the mod can traverse an arena end-to-end without touching the ground. This is probably the most troubling factor: "hooking" requires more twitch-based reflexes to find the perfect line through a map. Playing on some of the public servers available at the Steamworks launch revealed many players not even using their grappling hooks. As the gulf between experienced players and those new to the game widens, its hard to imagine Smashball being enjoyed in anything other than organized league play. While the mod does offer a in-depth tutorial, players not devoted to climbing the learning curve (and staying at the top) won't stick around. 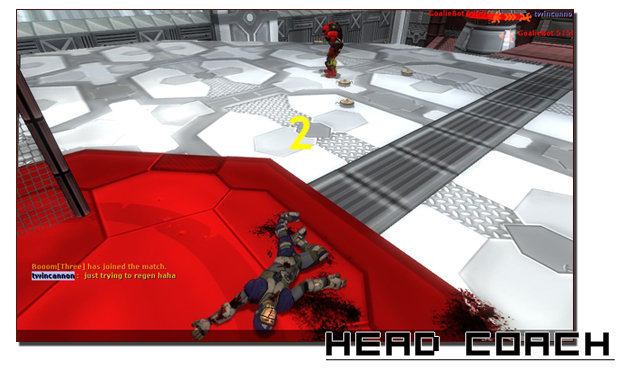 And what would a future sport be without its own league, complete with persistent stats? Smashball has integrated into the mod the ability to track stats and form your own teams for tournament play. The best thing is it all hooks into your Steam account. After a quick sign up process you can track your own stats and earn experience in-game that can lead to additional weapon unlocks. It's elegant, easy-to-use and an ingenious solution to building a community around your mod. Those interested should head over to Smashball.tv after signing up in-game to create your account and experience everything it has to offer!

Developers behind Smashball have no doubt poured hours into the project and it shows. Their discipline in waiting to provide a nearly full-featured, stable release has rewarded them with a mod that stands in a world of its own. What matters now is how they develop their community, as the mod itself feels like its only half of the experience. Getting a full-fledged league into play with the ability to spectate matches sounds like a dream, but is no easy feat.

It is a bit hard to get the hang of hooking, but then again, every game has something that you have to learn.

I agree with this, Hooking is hard.

I'm sure those comments were said in all seriousness (maybe?) but I'm laughing my head off. xD

I have a sudden and uncontrollable urge to play CRUSH! Deluxe now.

I've played the mod before it was on steam, so I am used to hooking :D

If Smashball gets on Steamworks this quick and Neotokyo doesn't I'm throwing my hat in.

That’s a silly thing to say, Smashball already had a release to show people it was a good game. D.I.P.R.I.P was the same. Neotokyo is yet to have a release. That said I believe every mod deserves the chance to be on steam works.

DIPRIP is fail, way too much lag in that game
waaay too much

I KNOW Smashball already had a release, as well as DIPRIP. The thing is there were mods like Dystopia that had the quality and gameplay that warranted it being included from the start (it was a very well established release, after all), but still took some time to get in.

Neotokyo has an incredibly high standard of quality in their content, and I believe the production value from what we've seen alone warrants it an inclusion in Steamworks. I also believe that six months from first release to inclusion on Steam is fast (as such was the case with Smashball), and therefore if in six months, Neotokyo isn't on Steamworks, I will, in fact, lack a hat. :p

Neo tokyo does look good, but its not out so no one knows sides the beta testers.

Also games like dystopia and what not were out far before valve started putting mods onto steam works. As soon as valve did start doing this, dystopia was one of the first.

I like this game a lot fps sport is awesome concept. A lot of fun to play. Although crash crash goes the game everytime I play which is sad. This game in a more polished commercial form could have great potential. I look forward to updates .