Post feature RSS Behind the Scenes: Collectibles in Path of Kami

Collectibles can be found throughout the Path of Kami world and represent Sacred Objects you can collect. These objects are used to foreshadow certain events or give lore information. We'll go behind the scenes and share an early look of what to expect and in-deph information about these collectibles. 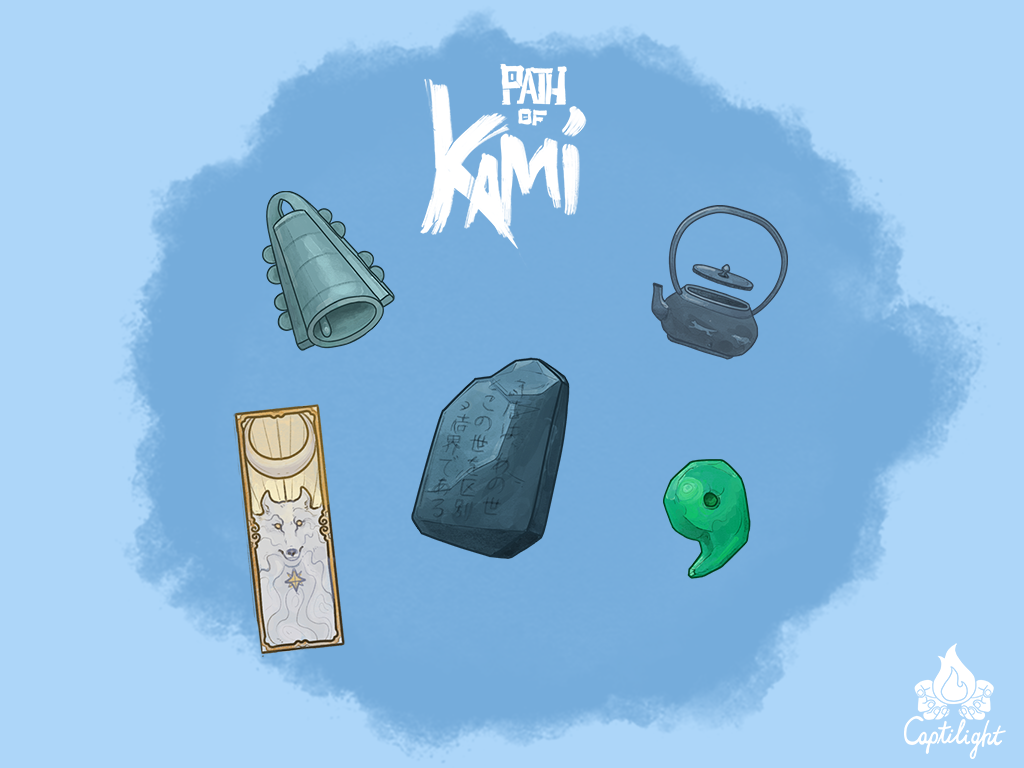 Collectibles can be found throughout the Path of Kami world and represent Sacred Objects you can collect. These objects are used to foreshadow certain events or give lore information, you’ll notice every time you pick one up there’s flavor text sharing more information about it!

When encountering collectibles you’ll also hear ancient whispers...there’s something very spiritual about these sacred objects! Later on some will even effect gameplay.

Collectibles take inspiration from folktales, Japanese culture and national treasures! Without sharing too much we can give you an early look of some of the collectibles you’ll encounter.

You’ll be able to find emerald green magatama beads throughout the maps! These are curved, comma-shaped beads that appeared in prehistoric Japan from the Final Jōmon period through the Kofun period, approximately ca. 1000 BCE to the sixth century CE. They are also known as talisman of good fortune. You’ll be able to collect enough to make a necklace!

We put this in the game as a reference to its significance throughout Japan’s history, including being one of the three Sacred Treasures that are said to prove the Emperor’s divine lineage.

You may recognize this name from one of our reward tiers for our crowdfunding campaign! Dotaku are Japanese bells smelted from thin bronze and can be plain or richly decorated! There are many theories on how Dotaku bells were used but there has been an agreement that they were produced during the late Yayoi period.

Dotaku were buried, singly, in pairs, and in large groups—occasionally with bronze mirrors and weapons—in isolated locations, often on hilltops, perhaps to ensure a community’s agricultural fertility. Later dōtaku had relatively thin walls and would not have resonated, so it assumed their purpose was primarily ritual. - Met Museum

In Path of Kami we plan on having 5 bells, referencing the largest number of ritual bells excavated from a single site in Japan (Kamo-Iwakura site).

Tetsubin (鉄瓶) are Japanese cast-iron kettles with a pouring spout, a lid, and a handle crossing over the top. These are used for boiling and pouring hot water for drinking tea and other liquids. These Kettles are traditionally heated over charcoal.

You’ll be able to find one in the demo! As always there’s always a special meaning to the collectibles, before grabbing it remember to take a good look!

We hope this helps give you some insight on the types of collectibles you’ll find in Path of Kami! Thanks for tuning in,