A freeware game creation system for classic 2D action games. No programming skills required; everything is made in a "construction kit" fashion. Achieve amazing results with minimal effort: Pre-defined "industry standard" game object categories and behaviour models with hundreds of attributes, all of which you can change. Create arcade quality games with just a few mouse clicks. Easy, fast and free.

And so, after a few months of silence the M484GCS project continues, this time with version update 9.0. This is an important update, which fixes 10 bugs (3 of which were major, including a nasty Win8 full screen crash) and also we get some handy new features. 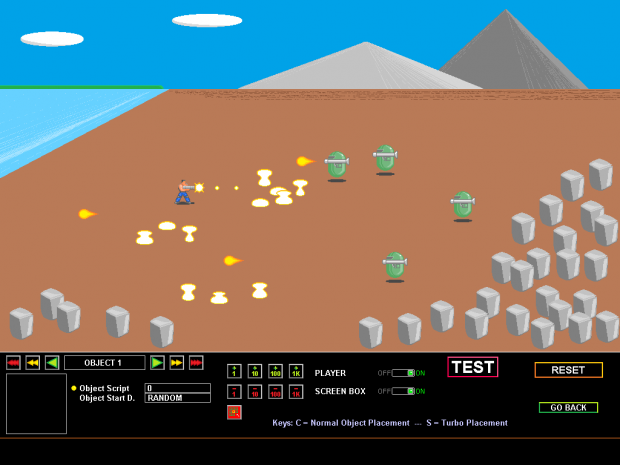 
Here is the list of the most important changes and new features in V9.0:

1. New License
I changed the License again: The program is now released under the Zlib License. The previous custom made "M484GCS License" was simply too complicated and too restrictive and I believe would have caused a lot of hassle later. So we'll go on with Zlib: simple 3 point free software license, short and easy to understand.

2. Source Code structure improvement
For normal users this may not mean much, but for me the Developer this is a big thing: thanks to the new improved 3 part source code, both the "Editor" and the "Game Engine" can now be compiled from BlitzPlus with just one mouse click. (Previously there was a complex multi-stage procedure when compiling the Game Engine)

3. OOPS button
Both the Map Editor and Shell Editor have a new button called "Oops". This is basically an "undo last move" button: clicking the button returns the current object/tile coordinates to the original values. This may sound like a small addition, but in fact it's a huge improvement to the editor user friendliness...just try to imagine drawing something in Paint without being able to use CTRL+Z to undo the results of mis-clicks, and you'll have an idea of how things used to be. :)

4. New Test Room features
Test Room has two new switches: "Player ON-OFF" and "Screen Box ON-OFF". Turning Player "OFF" will remove all Player Objects from the room, and also Player auto-respawn will be disabled. Turning Screen Box "OFF" will remove Test Room screen border checks. These two options make the Test Room a little bit more flexible: sometimes the Player object and the screen border check can just get in the way of things.

5. General improvements
These include new "hotkeys" to all editor screens, clearly marked "margin scroll areas" in the Map Editor, and other small things. 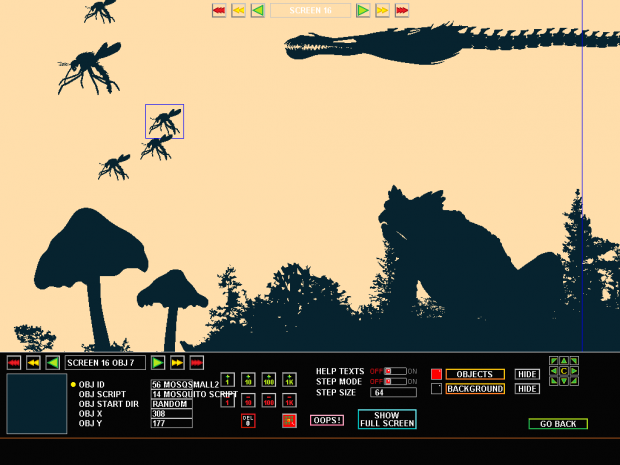 1. Windows 8 full screen crash
Why this happened, I don't know. In Win 7 and older Windowses everything worked fine, but now in Win 8, Windows started to give an error message every time you attempted to switch into full screen. I don't know if all Win8 PCs were affected, but I think that quite many were. So it had to be fixed, and the fix is this: the program now uses a "full window\" instead of an actual full screen. But in practice this looks just like a "real" full screen. The only drawback is that changing between Window and Full Screen now requires a game restart for the change to take effect.

Also all BlitzPlus users out there might want to check out the way how I made the Full Window to work in all resolutions: Screen filling borderless window + auto-centering Canvas + 4 auto-size-adjusting black "windows panels" around the Canvas to hide the truth. 1 Canvas + 4 Panels to fool them all. :D

2. Animation Delay Bug
This was a bad bug which affected objects that used Directional movement...Basically the animation cycle always started "too late" if the object had been stationary before starting to move. But now this is fixed.

3. Wall collisions broke down Margin scroll
Another bad one: if there was an enemy colliding with a "Stop Wall", margin scroll stopped working.

Version 8.2 has been released. The program is a little bit better again.

Version 7.1 has been released. One bug and one problem have been fixed. :)

Version 7.0 has been released. From this version onwards the program is open source and under a GNU GPL license.

Side Blaster is a horizontally scrolling semi-retro style shoot'em up made with the M484 Game Creation System. 3 different levels full of action and nasty...

Ok, version 8.2 has now been released, download the new version everyone. :)

I just released Version 8.1 of the program. :)
You can find it in the Downloads section, and also I updated that button in the old V8.0 news post to point into V8.1 instead.

V8.1 is a small bug fix upgrade, so I'm not making a separate News post for it here in IndieDB...And also most likely the next version (8.2) is coming quite soon; just a few weeks until the next small update I would say...so at that time I'll then make a combined News post here for both 8.1 and 8.2. :)

Sounds great! I have this on my watch list so I look forward to seeing how this progresses. It's great to see this kind of software being made to help non-programmers such as myself get our ideas out of our heads and into reality.

This look very interesting! I will have to download it and investigate! One question, does it just make shooter games or can it be used to make platform games as well? It looks like you've put a lot of hard work into this; I'm excited to give it a try.

Thanks. :)
Right now it can only make shooter games, and also some sort of "dot-eater" and "tower defence" games. But platformers it can't properly do, yet. Although it already has some supporting features for these (like gravity and a "jump" command for the Player), but these are still experimental and don't completely work.

But to the future versions I'm planning to add a full support for platformers, as well as support for beat'em ups, and maybe for some other genres too.

Mod SDK & Community
Built a game for M484 Game Creation System and want to support mods? Try mod.io, a cross-platform mod SDK created by Mod DB which makes it easy to get a mod community up and running in-game. Currently seeking games to integrate and promote