The basic language for handling computers along with CSS and JavaScript.

The problem with such games is that it usually accounts for only one orientation. There's nothing wrong with that, but since I personally prefer guys, I have to look in the yaoi genre.

The goal of Conquerrence is to make an M/M game that not only incorporates kinks found in hentai and the grand strategy premise, but pushes it even farther into a game enjoyable even without the NSFW bits. Each and every nation has its own history, culture and identity, making it a thriving world around you. They all have different interconnected relationships, most of which extend well past your kingdom. It is the same case for the leader of each nation, as they have connections to other leaders that you might not expect. Your nation and your character are not special by default: it is by your choices and interaction with other nations and their leaders that make them special. Another thing I found lacking, this time in the yaoi genre, was freedom to choose your role in bed. The character you play is locked in either as a top or bottom. Sometimes you get to choose between the two, but then the love interests are themselves locked as tops or bottoms.

Here, you choose between top, bottom, subtop and powerbottom on a scene by scene basis. While every leader has a preferred role in bed, they will go along with whatever you choose. If it's something they're not used to, they'll even comment on it before the scene commences. This extends to the player character as well. If you usually top but decide to bottom, the player character may think how this is an uncommon occurrence for them. In essence, you get whatever you want regardless. 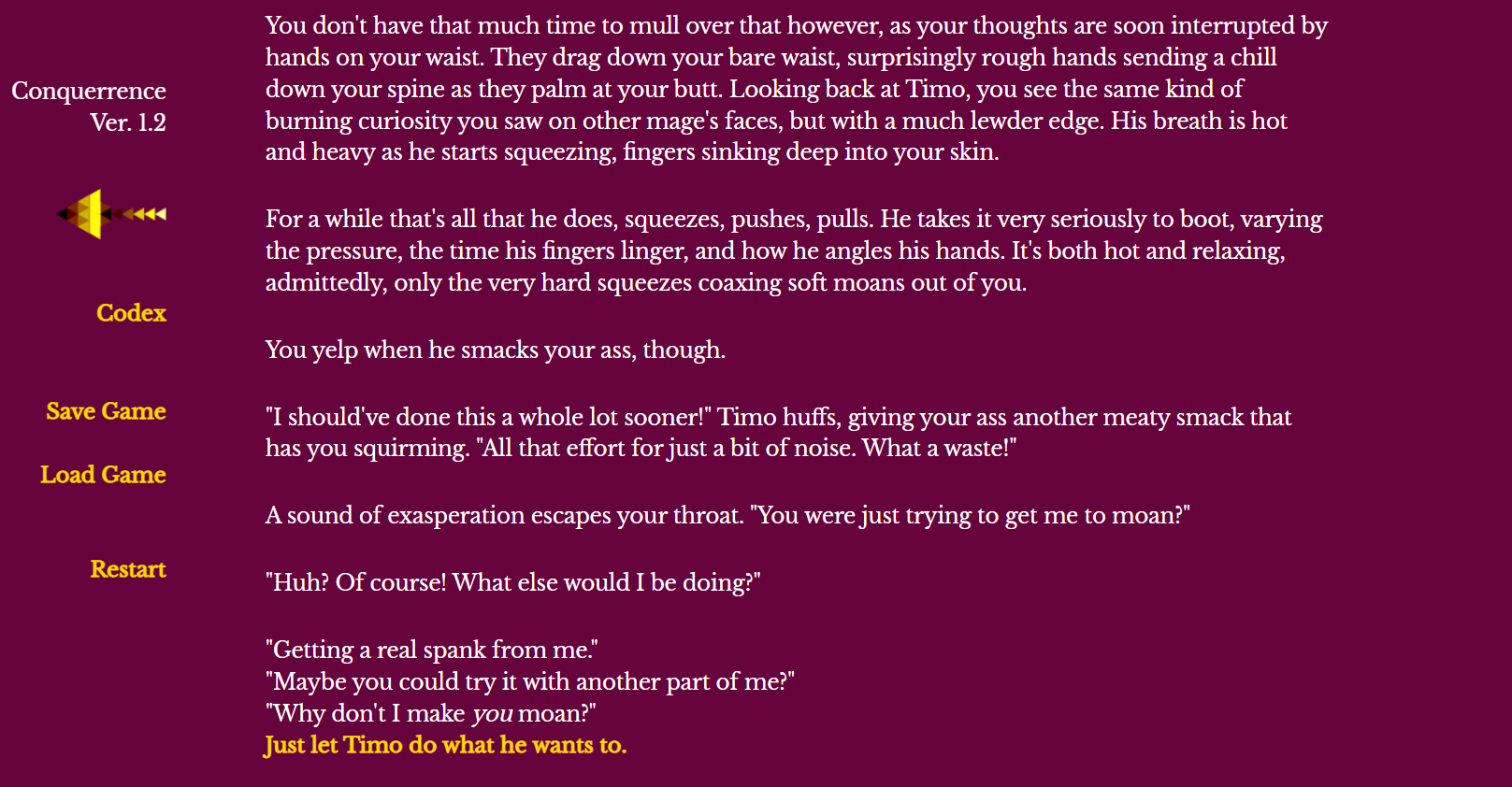 That's all for now. Even if this doesn't spark your interest in Conquerrence, I hope there are other developers who see this and decide to contribute to the yaoi genre. Thank you very much for reading.

Let's take a close look at the latest feature coming to Megopoly, Advisors!

The fantasy tavern-crawling food-based adventure game, The Finest Taverns, is now available to play for free in early access!

We've launched SimPocalypse out of Early Access on Steam the previous month, now releasing a major post-release update 'A Step Forward', which contains...

SimPocalypse has Launched out of Early Access on Steam!

Rebuild the civilization after the nuclear war has torn it apart! Improve your economy, research, advance, battle, and much more!

Drift Hunters is an amazing 3D car drifting game with an excellent selection of tracks and plenty of sport cars that you can tune up. Pick your motor...

Manage your team wisely at Retro Bowl to get the best scores and don't forget to sign new, stronger players. It's up to you how good you can manage the...

Shoot your gun to keep it flying for as far as possible in GunSpin. Unlock new guns and buy upgrades to travel further!

Merge items to build your own paradise in Tropical Merge. Complete a plethora of quests and create hundreds of new objects by merging and matching them...

Defuse the bomb before your time runs out! Defuse the Bomb 3D has you defusing bombs to earn a living. Follow the various instructions to successfully...

Conquerrence is a yaoi CYOA eroge game where you take the title of the King of Wevendh after the disappearance of your brother. Surrounded by other nations...

The Click Per Second Test is a free CPS Test, which measures your mouse clicking speed in a given time frame. The game is suitable for all age groups...

Mirage Online Classic is a free browser MMORPG and is the spiritual successor to the creator's 2001 landmark MMO, Mirage Online. Level your character...

Hey everyone! We're Megopoly, a browser-based board game where players can build, invest in, and upgrade cities while earning massive amounts of in-game...

The village inhabitants are under assault by large spiders. They beseech Catloaf (Biscous Buttertoast) to help them. Solve puzzles, slay spiders with...

Mod SDK & Community
Built a game for HTML5 and want to support mods? Try mod.io, a cross-platform mod SDK created by Mod DB which makes it easy to get a mod community up and running in-game. Currently seeking games to integrate and promote