Know the jargon. Seems like a simple enough truth; you have to know the names of various software and the resulting file extensions. It can get a little confusing so the sooner you hear the terms the sooner you'll be able to start referencing them.

Know the jargon. Seems like a simple enough truth; you have to know the names of various software and the resulting file extensions. It can get a little confusing so the sooner you hear the terms the sooner you'll be able to start referencing them.

There are three programs made available as part of the download.

You get Dedit, MEdit, and Lithrez. In addition you get a set of tutorials and documentation. They are good resources. They should be read. Some of the same material will be covered with modmaker's tutorials, and usually a different explanation can be helpful.

MAKE SURE YOU LOOK AT THE DOCUMENTATION THAT CAME WITH THE TOOLS You'll find them right here in the Docs Folder, In your AvP2 directory. 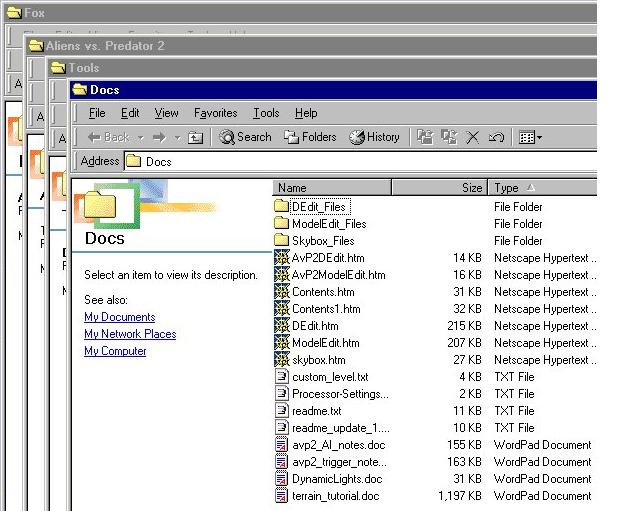 These tutorials go over some of the same information, but really they build upon some of the specifics in those docs as well. There is no quicker way to learn than to study all the information.. Let's start with some basic terms. To help you get a general understanding of the software you will be able to use.

The level Editor is called DEdit. You build maps, levels, worlds with this program. It creates environments in three dimensions(3D). You will be able to include everything from Artificial Intelligence, weaponry and vehicles with this program. You can also create cinematics. When you open up a world in Dedit, the file is saved as an .ed file. Once this .ed file is complete, it is processed and the resulting machine code is a .dat file. This is the format that is loaded by the game itself.

Medit or ModelEdit is a model viewer. Unfortunately it is NOT a modelling tool. It is used to view the .ABC models that are used in Lithtech 3D games. It simply 'manages' your models, animations, sockets, etc. so you can NOT create new models or animations in this program, though you can organize models and animations with it.

To create new Models/Anims you will need a 3D Modelling program. Which one you ask?

Monolith released certain plugins that read/write their .abc format. SoftImage, a very expensive high end 3D modelling and animation program, is the favoured choice by Monolith. They have also provided plugins, for 3DMax and maya, but these are not entirely supported with the free consumer SDK. Licensees have additional plugins available.

Lithrez is a simple DOS based command program that "rez's" Lithtech game resources for distribution. All game resources are in rez files. Lithrez can extract or create these rez files. When we go through installing the tools, a program will unrez most of the game resources and make them available for your tools.

Next to map making, creating new skins for game characters is a very common modding pasttime. Textures and skins used in games have a proprietary extension .DTX, (most easily remembered as Dedit textures)

You can convert them from .DTX to .TGA or .PCX in DEdit (under the texture tab). Then you edit them in 'any' paint program (like PaintShopPro, PhotoShop...) that can save/open TGA or PCX Files in 32 bit true color format, and then convert them back to DTX using DEdit once again.

Attribute File Editting The .TXT Files in the rez file are SETTINGS files, so you can easily change certain aspects of the game. Change the speed of the character's run, increase weapon damage, create new characters. These are simple "no SOURCE CODE required" modifications.

This is NOT 'Code'. The code would be all the .cpp and .h files used by the C++ Programmer. Editing these attribute .TXT files is not hacking/cracking/whatever else you want to call it. It's simply changing a text file! It should be noted that when you change these text files, the net code checks to see that everyone who joins a given server has the exact same text file (protection for cheating) and returns an error if there is incompatibility. Every player must have the mod loaded on their machine to join the same multiplayer game. It is a non-issue for Single player. Though you should note, if you have a single player mission that you release to the public, and it changes certain attributes, those changes could cause a resource error for people when they join a multiplayer game. There is nothing malicious in that. It's just a mathematical calculation. Be careful when you change attribute files, and clearly test for and note any potential problems in a readme file.

Good luck with learning the phraseology and jargon! It's not extensive, but it is necessary. Okay, let's download this SDK.