Here we take a look at setting up and configuring Visual Studio 2013 alongside the Half-Life SDK for programming. We also show how to build, and run the Game in Debug mode. We also touch lightly on some coding by showing how to output a HUD message when the player jumps

Posted by sourcemodding on Sep 3rd, 2016 - Basic Client Side Coding

You can find the accompanying PDF here.

The Original Tutorial can be read here.

What you will need:

Note: The Half-Life SDK available on Github was built using Visual Studio 2010 so it will run out of the box with that version. Newer versions require that the Solutions be converted to work with these newer versions of the IDE. The IDE will tell you when it performs this conversion.

Download the Half-Life SDK from Valve’s Github repository, You can place and extract the downloaded ZIP anywhere you like.

Mine is located here:

Opening the Project and Configuring

Note: You may see the following if you are using a version of Visual Studio newer than 2010 Simply click OK and let it work. This is the conversion process I noted earlier. 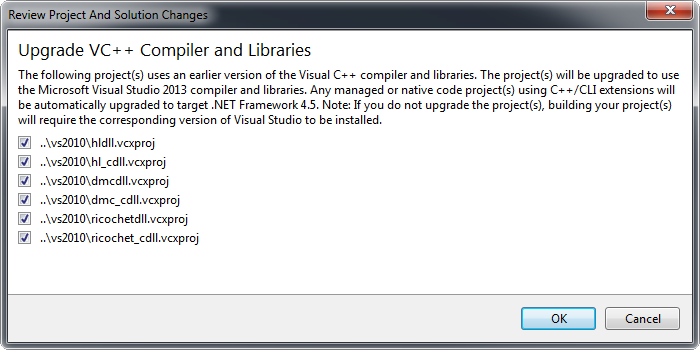 I also suggest you change the color scheme to Dark to make viewing and editing the code easier. This can be done from Tools > Options > Environment > General and setting Color Theme to Dark 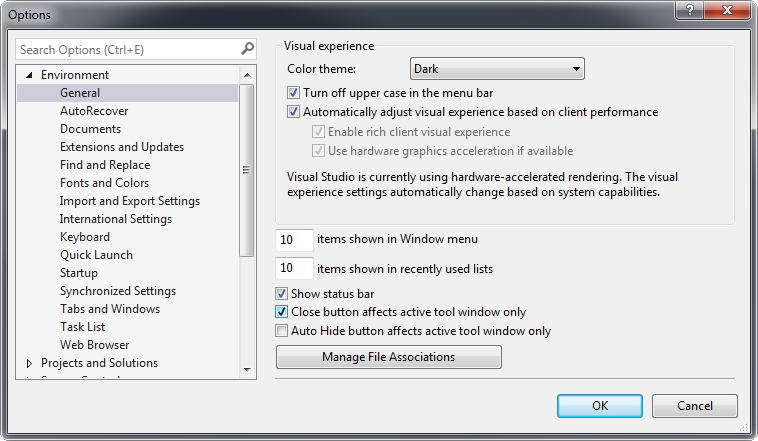 To the right hand side of the IDE note the Solution Explorer which should have 6 projects included: 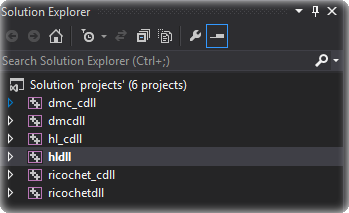 We need to make some changes to hldll’s properties. To access these simply right click and select Properties.

Firstly let’s change Configuration in the top left corner to “All Configurations”. This means that changes we make to the properties page will propagate through all project configurations in this case both Debug and Release.

Then we should turn off the post Build process which can be disabled by setting Use In Build to No in Configuration Properties > Build Events > Post-Build Event ( This command when it works correctly would have copied the complied DLL to the Mod directory, simply put for the scope of this tutorial we do not need it ) 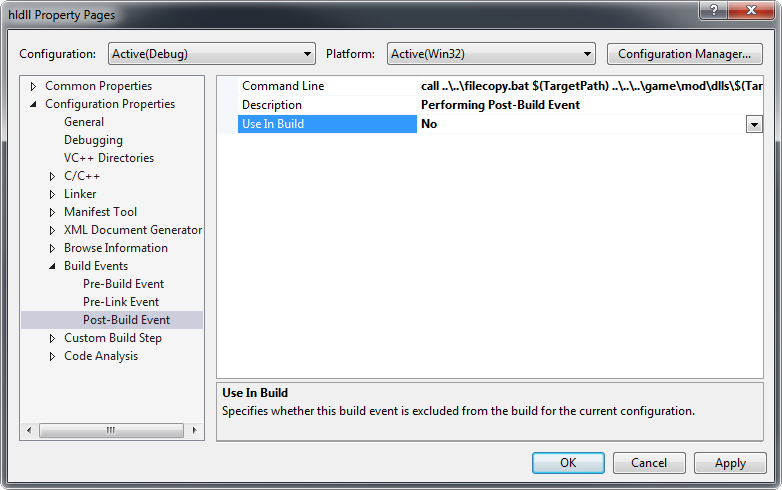 Next we must Change under Configuration Properties -> General the Output Directory from: to the directory inside your Half-Life installation where hl.dll resides. In my case it is here: 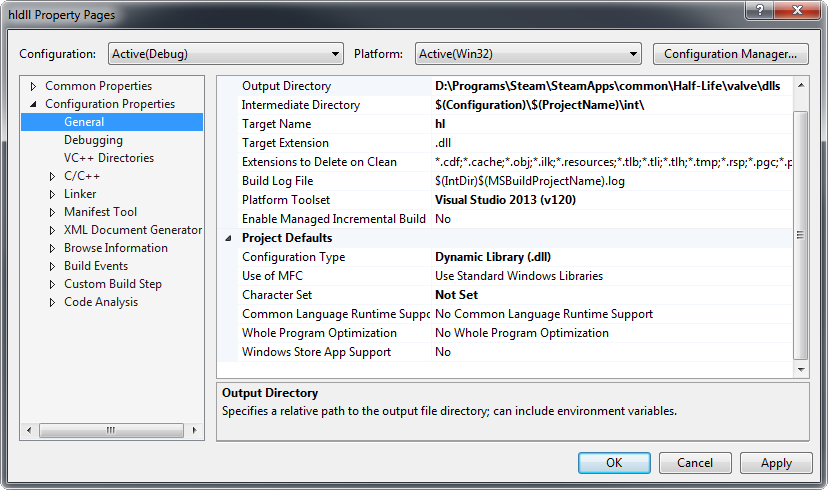 Under Debugging -> Command provide the path to hl.exe.
For me this is: Add the following to Command Arguments: Set the working directory to the root Half Life Directory,
in my case:

We should Unload the remaining Projects in the solution that we are currently not using. Right click on all unwanted projects (hl_cdll, dmcdll, etc..) and select Unload from the menu. hldll should be the only remaining “loaded” project.

Now it is time to build the project for the first time,
Under Build Select Project Only > Build Only hldll ( saves time compared to building all projects )

If you unloaded all other projects you can simply click under Build “Build Solution”, it will build the remaining loaded projects.

It should take a few minutes and you will probably get quite some warnings in the Output towards the bottom of the screen, This can be ignored (These errors occur due to changes to C++, Visual studio and the source code down through the years)

For “Disable Specific Warnings“ add the following: Apply these settings and compile again. The warnings should no longer be present in the log.

You should see that the build has succeeded, You can now double check the generated hl.dll file’s timestamp to ensure that it created a fresh Library in the right location.

For me it can be located here: If all looks good we can now try and run the game from within Visual studio. Click on Local Windows Debugger to launch the game.

You will get the following error if Steam is not running:

Start up Steam, Half-Life should then run and you should be able to play through the original game without issue.

So let’s do something to the code:
Let’s add a message for when the player jumps.

To do this locate player.cpp inside hldll > Source Files > dlls in Visual Studio 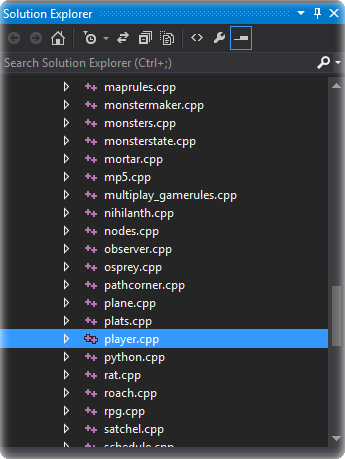 
Save the changes and build hldll, Then enter the game and jump. You should see in the top left hand corner the message “Hello Half-Life” 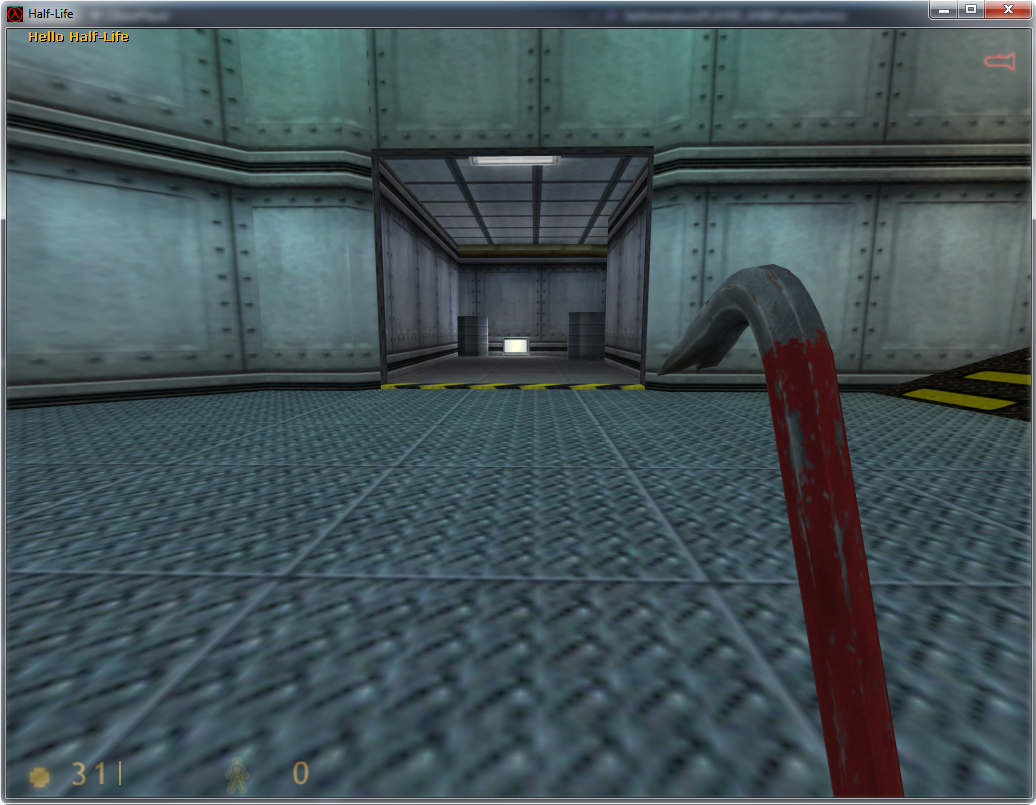 Printing to the Console Only:

For printing to the server (hldll) console this is:


The \n is important because it adds a line break so that the next call to this method doesn’t simply stick text to the end of your statement but rather creates its own newline.

The equivalent in the client (hl_cdll) is:

The Server (aka hldll) contains all the code that is common between all players, These include AI, Monsters, Items, Weapons, gamerules, entities, etc..

The Client (aka hl_cdll) contains all the code that is specific to each player, Things such as the HUD, events system, input processing, VGUI (MOTD, TFC team/class selection, command menu) as well as some items for rendering.

You can learn more about this kind of game architecture here.

Build your binaries in release mode when you are making a final binary to distribute to friends or the community. To do this simply right click on the project, select Properties -> Configuration Manager (Top Right). In the window that appears select Release from the Top-Left drop down box. This sets the active configuration to Release as opposed to Debug which is the default setting. Close the window and compile the project again.

This will create a Release folder next to your Debug folder in the solution (code) directory. If you set your settings to affect all configurations as described earlier the newly compiled dll will have copied to the correct mod folder.

When compared to the Debug binaries the Release binaries are typically smaller in size and contain optimizations to improve performance at runtime.

I want to extend my thanks to Shepard62700FR who provided some very helpful advice which I added to the tutorial.

I want to thank Malortie for his Visual Studio 2015 compatible version of the Half-Life SDK which I am sure many of you will find useful.

And finally I want to thank you the reader who took the time to read this, I hope this short tutorial helps you in some small way. If you find any issues or if you know of anything this tutorial should include please feel free to send an e-mail onto me concerning it.

The support thread for this tutorial can be found over at the forums.

Btw. in regards of coding you and everyone else that qualifies should help out this guy:

If you do have a neck for coding and seeing issues others don't help him. He is enhancing Half-Life beyond everything I've seen to date. Fixing so many glitches Valve & Gearbox left etc. it's unbelievable. He is some sort of coding genius to give you a simple example. He is the 1st person ever in the History of Hl1 who successfully recreated the Op4 Rope. That was something of a holy grail for the hl1 coders. There are still plenty of issues to find in his code enhancements. Help him on the bug hunt if he succeeds Spirit Half-Life will be a trash can in comparison.

he seems to be rebuilding the engine from the very bottom, but I wonder if I could borrow that sexy rope for an SDK2.3 build

@Foxtrop: As far as I know you can. His intend is it to enhance Half-Life and then releasing what he has as some sort of Spirit like enhanced free to use build. However if I were you. I would wait not just for the rope but for all of his fixes. For instance there were also many enhancements he made for the weapons. Apparently some of them didn't even play their proper animations code wise. So things we barely or never saw before are suddenly fixed. Not to mention new additions to the engine such as velocity when you jump onto moving objects or op4 monster replica which are identical in their behavior and visuals to the original op4 etc.

It would be even better if you play test his builds and report bugs so he can fix em. We all will benefit from his work. Yes this entire remaining community would benefit, I'm sure of it. :)

I strongly suggest you read through the entire discussion Foxtrop. Unlike you I'm not a coder but even I find it extremely interesting what he is writing there.

As for the Rope you just can't copy and paste it as he changed the code. He uses Anglescript and a whole lot of new references. He practically re-codes Half-Life based upon the limitations of the engine itself of course.

Good Find! I must add it to sourcemodding's sdk and source code section. He is the same guy that made an up to date model viewer for Half-Life recently. Gonna put a pin in this and watch his progress :), Thanks.

Thank you so much for this, I've been waiting for an up to date tutorial related to coding for HL1.

Excellent tutorial, well written and easy to digest. A small side-note I wish to add however about Debug mode, is that it causes small sprites to appear above AI's heads.

Its just worth noting that for anyone who has compiled their code and wonders why
people are emitting sparks. Had this happen to me once and forgot it was due to
Debug mode. Needless to say I was worried for a bit.

I only tested this on SDK2.3 converted to VS2008 but I assume it still applies to the modern source code release.

That's good to know, I haven't noticed it yet because I haven't delved into AI yet but I will keep it in mind when I do :)

Heya! Great tutorial man, I just got some errors that I'm not sure how to solve

A bunch of files, mostly bmodles.cpp have "'abs': ambiguous call to overloaded function" and thus, it won't build
Thanks in advanced!

Really great tutorial, I have a question though. Is there any way to execute a console command inside the code? For example, if something happens it rebinds a key.

a very long line from the directory indicating hl.dll

Hope someone doesnt mind helping me this much later but I get the following error when trying to build hldll: