An updated guide on properly installing interface overhauls such as Vanilla UI Plus or Darnified UI, along with extensions such as yUI and the Mod Configuration Menu.

This guide explains how to easily install user interface mods on Fallout New Vegas with the User Interface Organizer (UIO). It’s based on my experience from developing and supporting a popular interface mod, and assumes an understanding of these terms:

The guide also assumes that you’re using a mod manager and your best options are Mod Organizer 2 and NMM from Github. I personally find NMM easier but if you are going to use a lot of mods, go with MO2.

Before you start, make sure that your mod manager’s Archive Invalidation option is enabled and that you have installed the latest version of UIO. Then apply the following steps in order:

When you run the game, UIO will automatically link your extensions without affecting your installed files. This means you can safely uninstall UI mods at any time, but remember to also uninstall any dependencies, e.g. if you uninstall VUI+, also uninstall anything that requires VUI+.

You can also check out this video which will explain some fine details on how to use MO2 to manually install files:

The video continues on the important subject of file conflict management:

The YUP patch will also be installed but requires no mention because it’s essential for a stable New Vegas game. By checking out the “Currently supported mods” list for UIO as well as the descriptions of our mods we figure out that:

So, we’re now ready to start installing according to our Installation Steps:

That was easy since VUI+ is designed for maximum compatibility.

Darnified UI is an old and highly respected interface overhaul. It has its own unique style, based on smaller fonts which are especially appealing to players who want to use additional HUD infographics. Although it was left in alpha stage, it’s fully functional and the majority of UI mods work fine with it.

We’re now ready to start installing, keeping in mind that patches should always be overwriting their parent mods:

The HUD Editor was not included in this example because it’s a base mod and it’s not specified to be compatible with DUI. Base mods should always be considered incompatible by default; overwriting them by each other without reading instructions will often result in malfunction.

Restoring font edits on your Fallout.INI

Some mods suggest that you should edit your Fallout.INI or FalloutCustom.INI files enable their fonts. This is not a good practice, and if you uninstall such a mod and forget about those edits your game will break.

To fix this problem you must open your Fallout.INI or FalloutCustom.INI files in Notepad and restore the [Fonts] section to the following:

I have tested and rejected FOMM, Vortex, ModDrop, and Wrye Bash for this guide.

FOMM cannot be recommended because it cannot install NVSE plugins. ModDrop and Wrye Bash do not support C# scripting used in some popular New Vegas mods. As for Vortex,

My dude, since Vortex is the official manager from Nexus and 80% of all the mods come from the Nexus, why not simply make the guide vortex-compatible?

For years, mod authors have been posting load order suggestions in the following form:

This is really easy to do in both MO2 and NMM from Github. In the former you just drag mods according to your load order, as seen in the videos above. In the latter, you install mods in order and select “Overwrite” as you go.

In Vortex however, this is what you have to deal with: 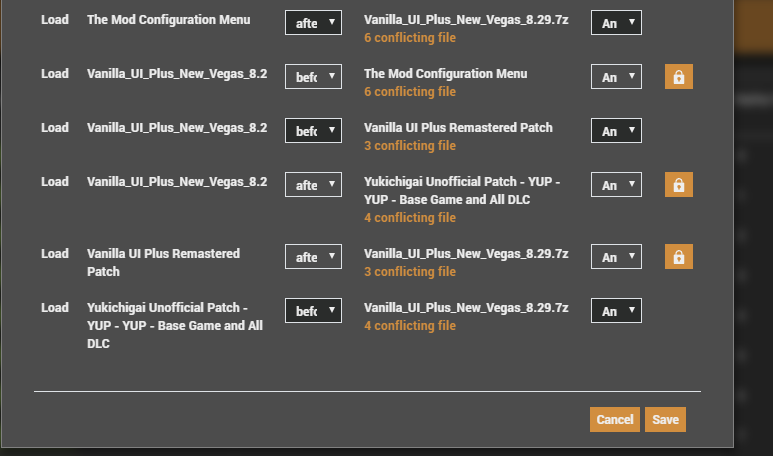 The mod manager’s job is to make things simple. This is not simple and it’s not something I’m willing to support. That’s why I can’t recommend Vortex.

Please don't post your comments here. I only read comments at the main page: Moddb.com

For suggestions or UI-xml coding help please use the forum at Moddb.com