You can easily add objects to your level to increase the interest and interaction in your level. Its just a question of how much, and how complicated you want to make it.

Subset of the props object. Most these things are not complicated. You can easily add objects to your level to increase the interest and interaction in your level. Its just a question of how much, and how complicated you want to make it. to want to jump into the complicaout a month fixing all the mistakes you will inevitably make.

Marine gadgets that give variety to the map..

A Hackable panel is pure USCM excitement. You want to be able to include them in your map, to open a closed door or set off some other event. They are actually very simple to set up. Think of them as a ONE TIME SWITCH. 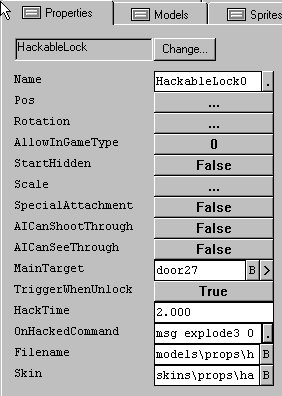 The Panel gets hacked, using the hacking device( a weapon) and an event is triggered.

If you set up the main target, which must be a door, or the subset of a door, for example a switch, when the hack happens the DOOR is automatically UNLOCKED. And then you can enter. Again like most Monolith objects, there are extra command field giving you the option to send other messages. In the example, an EXPLOSION named explode3 will be set off at the same time. Just a simple level of interaction.

The Hackable Lock, gives default model and skins when it sets up, theorectically you could change these, though what is given work well. The one thing you may have to do, is set the rotation, depeding on which facing all you intend to place the panel.

Does it work for MP?

Unfortunately a hack Panel is coded as a one time event. It can't be reset. Alz, considered setting up a series of hidden panels, that would be made available as a MP game proceeded, and it could work, but since it is not hard coded eventually the system could potentially break. It will be good to see some sort of PANELS in MP games.

I've included alz comments in this regard here for you to read.

The GameStartPoint has a field at the very bottom called something like "MP COMMAND". Anything put in this field (on any startpoint, it doesn't have to be a "used" one, just in the level) will be triggered at the start of a new round. (Remembering that vanilla DM and TDM don't have rounds)

Make a trigger, call it something like "nextround". In the MP COMMAND field (put it on any one gamestartpoint) put "msg nextround trigger".

On the actual trigger, put in whatever you want, like:

And you basically reset everything at the start of each MP round. Unfortunately, that's the bad thing. Hackable Locks and Torchable Locks are one-time events. There is no code supporting them post-use.

So, you only get to use them one time, I (alz)once worked out this complicated way of having X number of locks in a level that each become unhidden during the next round, but even that didn't work. How would you know if the previous one was torched? Even adding a hundred hidden locks would break down if someone played it 101 times.

You can weld a lock and it stays there for the next round -- but that's not really a feature.

Have a respawning Hack-time pickup lets people get the pick up after some else already has. Before, once you picked it up, that was it. Only one guy could ever have it during the whole match -- because it wasn't allowed to respawn. It was a simple fix to respawn the hack pickup by modifying some attributes.

Fixing the hackable and torchable objects would require engineering time, which I can't see FOX seeing important enough to schedule.

Subset of the props object and it share its porperties. Most these things are not complicated. You can easily add objects to your level to increase the interest and interaction in your level. Its just a question of how much, and how complicated you want to make it.

Marine gadgets that give veriety to the map..

It doesn't look like most people have ever used it, but the torch works with two functions. torchable and weld .

Right Cick in Dedit, and select ADD OBJECT, and choose a Torchable Lock under the Props object. 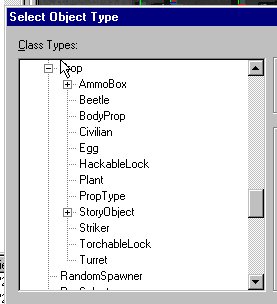 The actual properties of Torchable and hackable are similar, in that both generate a model on screen that needs to be placed in a specific location, rotated as necessary, and set with a time, that will destroy it. 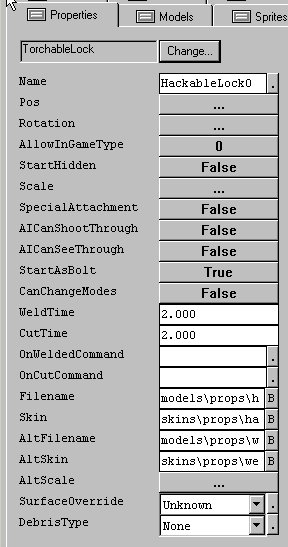 In the Torchable situation, the location remains, and a weld can be placed in the same place, and thus unlike hackable, the torchable can be reused in MP. There is also a TorchEventCounter that keeps track of the bolts that get torched, if say you need to blow 4 bolts before the door unlocks.

The result is weldable doors in MP?

Marines can LOCK and UNLOCK doors in an MP game using the torch's dual function, weld and torchable. And as you can see it is easy to implement.

Create a door, example door27, set it to being locked.

Place a torchable lock at the door. In the ON CUT Command, add the message; msg door27 UNLOCK