Post tutorial RSS 10 things you should know, to get the best out of Star Trek Elite Force II

In this Tutorial it is explaind what should be done to play Star Trek Elite Force II well on a modern (2018) Computer and how you can get quickly the best out of what the game has to offer.

This Tutorial assumes you have successfully installed the game with administrative privileges.

For most users that would be by default in C:\Program Files\Activision\EF2\

At first you should patch the game to the version 1.1 with the official patch. The patch fixes issues with the game and enables you to play on-line, because all the community servers are with patch 1.1.

The only official patch 1.1 is about 25MB in size and provides you with 4 new Multi-Player Maps. But it also renders your previous save games invalid, so you should install it before you start to play the Single-Player or once you have completed it.

I recommend that you rename your ef2 executable to quake3, for better performance. The reason is how OpenGl is handled by the Graphics-Card driver.

Renaming the ef2.exe to quake3.exe will resolve a number of issues and have a massively positive impact on the game its performance.

I recommend, you make a copy of the ef2.exe and rename that copy to quake3. You also need to start the game using the quake3.exe, the shortcuts the installer created for the game link to the ef2.exe, you can either update them or have them removed and create new shortcuts.

You might not see the file extension .exe, then rename the ef2 file with approximately 2,3 MB in your game its installation folder, the other ef2 file is just a icon.

3. HOW TO PLAY ONLINE

Like it is common with older Games, the Master Server of Elite Force II is no longer reachable. So the game will not be able to list you any Internet Servers. This can be fixed.

The Elite Force II community has a own Master Server, that was provided by GSIO01 and is hosted by the sfu-clan.com. More details: Moddb.com

You can download the Master Server Patch from these websites
Moddb.com
Rd.nexusmods.com

If you connect to a Online server and get the Error that reads: Coudn't Load maps/*mapname*.bsp, you are missing a map. You can search on the Internet by using both, the name of the game an the name of the map.

There are more than 2 GB of Custom made content for Star Trek Elite Force II,most files can be found at gamefront.com. The Most notable Modifications for the game in alphabetical order are:

A Gate two Birds and the Beautiful Sky (Singleplayer)
Moddb.com

Maps and Modifications usually go inside the game its base folder, default is:
C:\Program Files\Activision\EF2\base\

Usually Maps and Mods come in pk3 files, some maps and mods are not that neatly packed. So you are adviced to read the Instructions and Readme of any Mod you are installing, they can contain valuable information, without these you might not get the Mod/Map working.

For the most Maps using the map or devmap Console Command will do the trick, the mapname can be obtained from the *.bsp file inside the (pk3) maps folder, if it is not provided by the creator of the Map.

PK3 files are just plain Zip-Archive files renamed to pk3, and as such can be opened with any Archiver like 7-Zip, Win-RAR or any other Archiver.

Be careful not to edit any of the PK3 files on accident, any make backups of any files you change.

Each asset has its own folder, models, textures, sounds, maps and so forth. If you are installing a new map, you need a least the *.bsp, it will go into the folder maps:
C:\Program Files\Activision\EF2\base\maps\

If you don‘t have that folder yet, create it. Optionally the Map/Modification also provides you with additional files. It is best to keep the provided folder structure of the mod as it is.

If you are unsure which pk3 files are native to the game, sort the files by modification date, this way you can also find and remove mods again. (Unless you have modified the original game pk3 files)

The Game Console allows you to enter commands that would otherwise not be available to you, if not provided by a Menu.

You can open the game Console via a specific Key on your Keyboard while you are in-game. This will not work with the Demo version of EF2.

The in-game console should appear as grey, slightly transparent overlay. You can only paste text you copied outside the game into the game console, by pressing the middle mouse button.

To get text from the console you need to either activate the logfile that will be saved in your game its (base) folder. Or if you have cheats activated you can have a separate console window from which you can copy the text.

Many commands previously enabled, can be disabled by setting a 0 as parameter or by using the exact same command again.

You can set a custom Video Resolution in EF2 like with every other id-Tech 3 (Quake3) Engine based game. By accessing the game its console and typing the following commands: 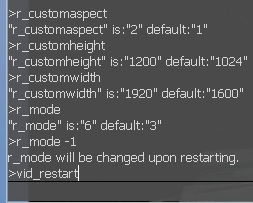 Once you have finished, you can either quit the game and start it again or use the console command: vid_restart

Note: Some resolutions will work while the game is Windowed , but not while in Full Screen.
(use ALT + ENTER on your Keybord while in game to switch)

If your game doesn't start any more after this, it will again, if you delete all the *.cfg files that are in the C:\Program Files\Activision\EF2\base\ folder. And ONLY the files directly inside the base folder. If you delete *.cfg files from any other folder, like for example the C:\Program Files\Activision\EF2\base\global\ the game will no longer start.

I also recommend to disable Stencil shadows, because they are buggy. In game click on Advanced at the game its Video settings Menu, and set the shadows option to Simple.

If your game is freezing or lagging on a specific Level/Map or at some areas of a Level, this could be caused by a very to high Framerate, which could be around or above 333.

You can fix this by either:

BSP to MAP decompiler - If you lost your *.map files
(decompiling maps without author permission is forbidden)
Will Fowlers BSP-Decompiler Github.com

Will Fowlers BSP-Decompiler is the best and most accurate decompiler for Elite Force II, the only two issues with this compiler are:

The Sky Texture problem can be resolved by opening the *.map sourcefile with a Text Editor (Notepad++) and replacing all the strings special/sky with: textures/common/skyportal

I have seen many people that couldn't resolve their issue with the game by them self. Posting comments on unrelated or dead Forums and Websites. Elite Force II is a old game, many experienced gamers know games like this from their childhood and how to handle these old games.

If you have a friend that might know something about games that existed before platforms like Valve its Steam became standard, ask him or her.

If your game doesn't start any more it helps in most cases, if you delete all the *.cfg files that are in the C:\Program Files\Activision\EF2\base\ folder. And ONLY the files directly inside the base folder.
If you delete *.cfg files from any other folder, like for example the C:\Program Files\Activision\EF2\base\global\ the game will no longer start.

Try to search on the internet for how to resolve your issue, I am pretty sure you are not the first Person to run into troubles with a game.

If nothing of the above helped, contact me, I am pretty sure we can work it out together. Please note that it may take a few days until I get back to you.

This is a hell of a great write-up here. I've only done half of the things here. Looks like I might as well do a fresh reinstall.

Thanks Commissar1032,
I am thinking of making a pdf version as well, because I think it could be packed as a extra into mods.

I am also thinking of making a Trouble shooting article.

Here is the pdf version: Moddb.com