This update is about new PLA arsenals, units and more. This is only a preview of the progression and where the mod stands. Also, what I'm up to.

After being gone for like two months or so, I've actually got a free time to do renders and stuff for this project. I did what I could for the meantime and it's not much.

Right now, I already have list of "what to do" written down so I should know what I'll be doing. However, the future updates might not be as frequent as before since I'm still bound to the university stuff. So basically, I've done with the prequel test stuff but I still don't know if I've actually made it or not until the end of December this year. If I've made it, I'll be able to work on the mod in full capacity as before. So, pray me for succeeding in entering a university, I'll appreciate it a lot.

Now, enough of that. Let's get to the main stream. 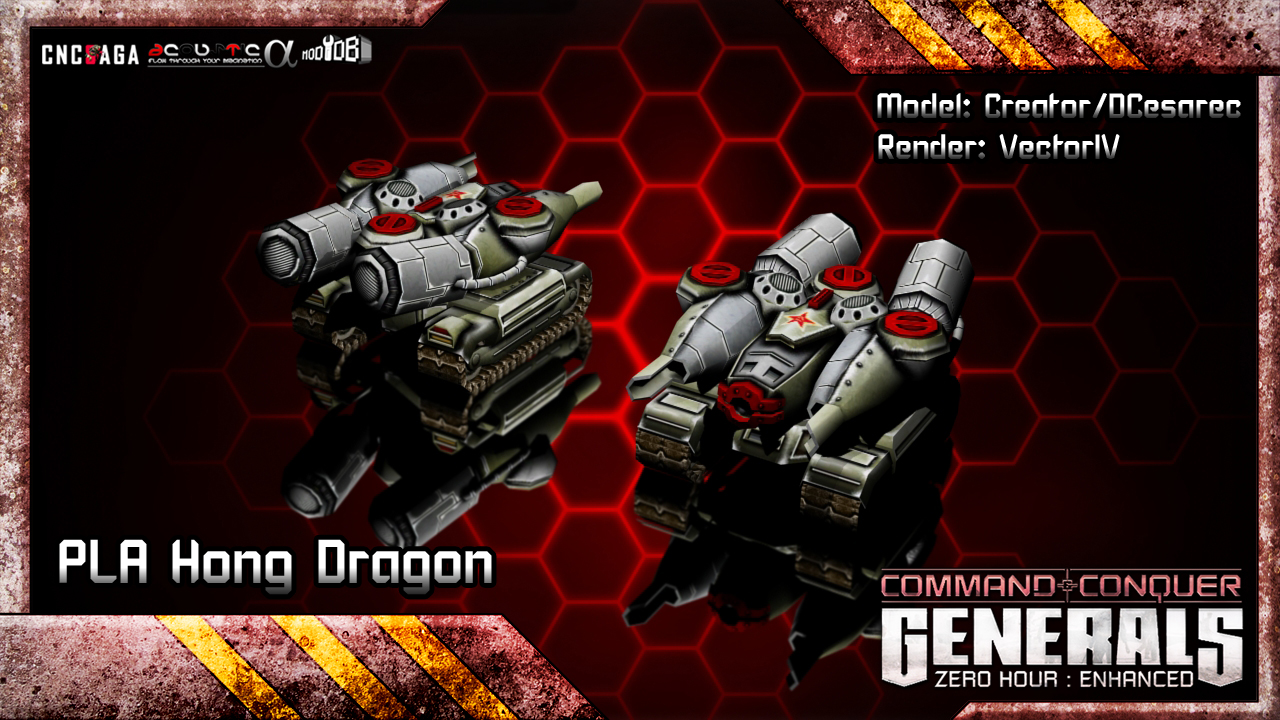 This is PLA "Hong" Dragon Tank. So familiar? Well, yes, it's fuck is. This is a model made by Creator and DCesarec currently use in Contra mod. But why is it here? That is easy, we've made a deal.

According to Wikipedia, "Hong" is a two-headed dragon in Chinese mythology regardless of the rainbow part. 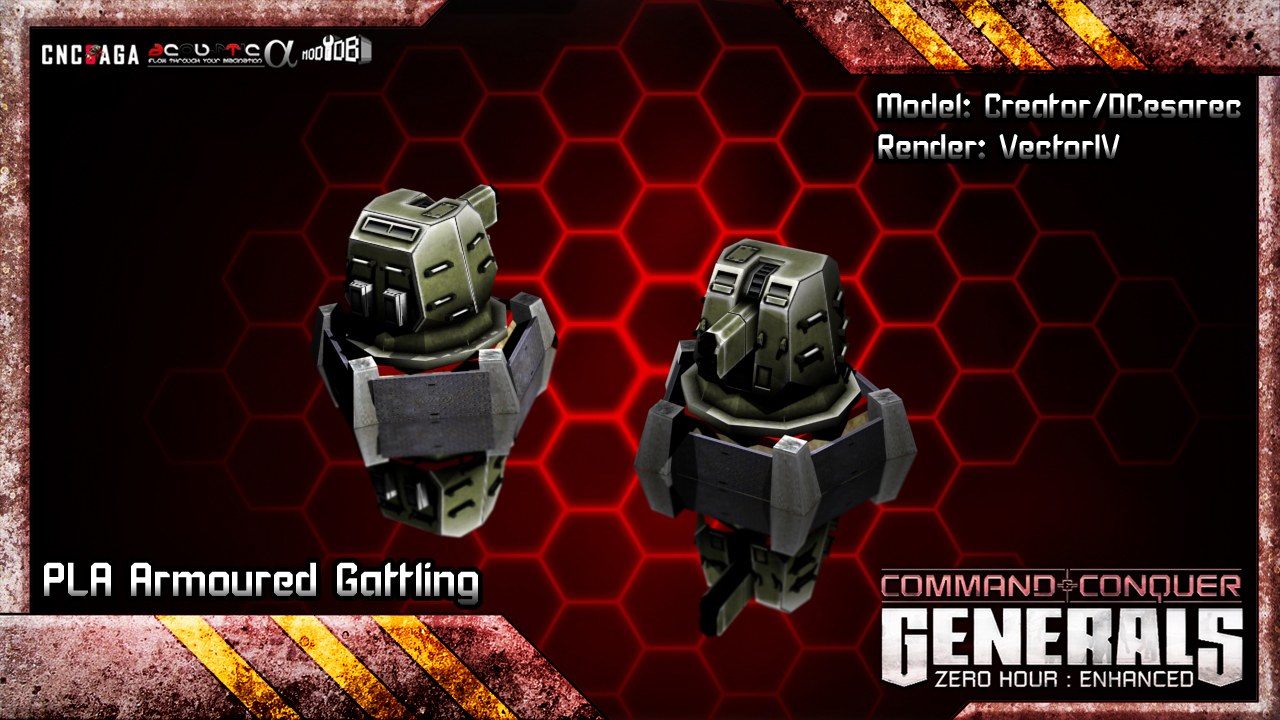 This is PLA Armoured Gattling. Fires at its normal rate but has furthermore armour reinforcing and can be out run by its slow turning and pitching rate. Nevertheless, it's an excellent defense against frontal attacks, giving Tao ability to establish a safer base. 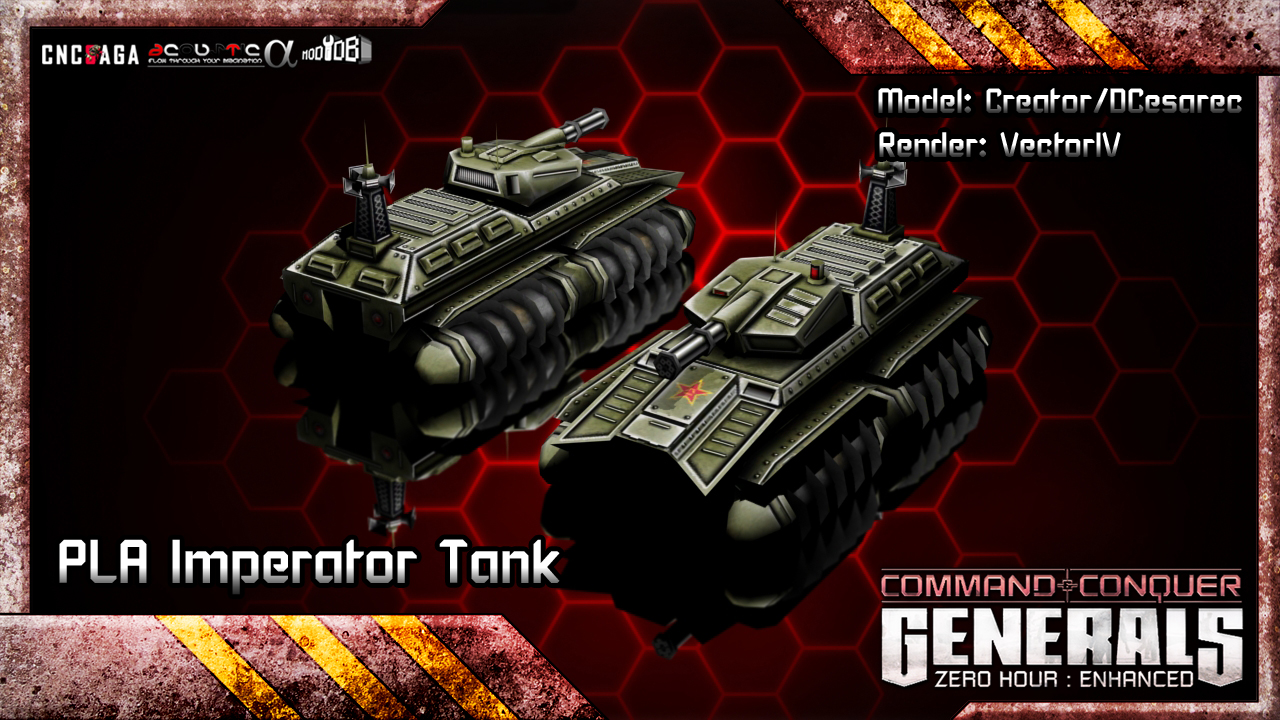 This is PLA Imperator Tank. It has a modified overlord chassis and tracks. This gives it protection against light armour piecing weapons and allows it to travel in rough terrains such as rivers. 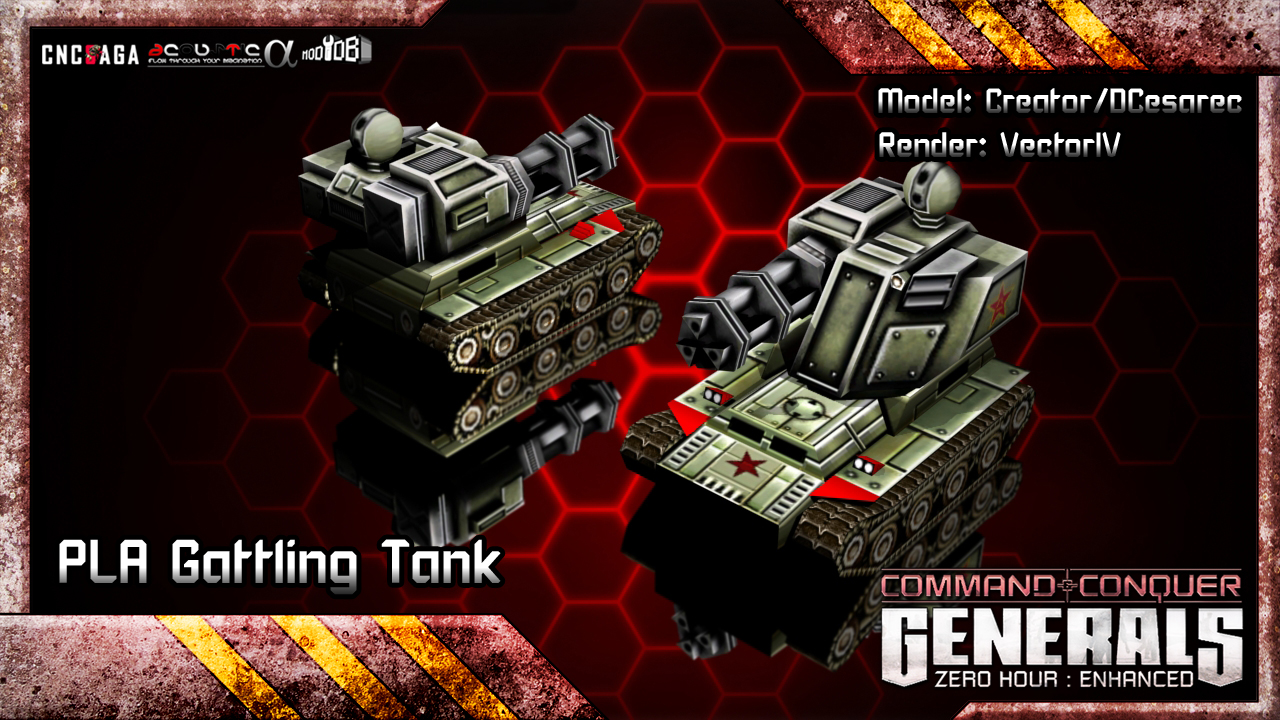 This is PLA Gattling Tank. Like other designs of the Gattling Tanks, it shares the same features and details apart from its little reinforced turret and its slow turning rate. 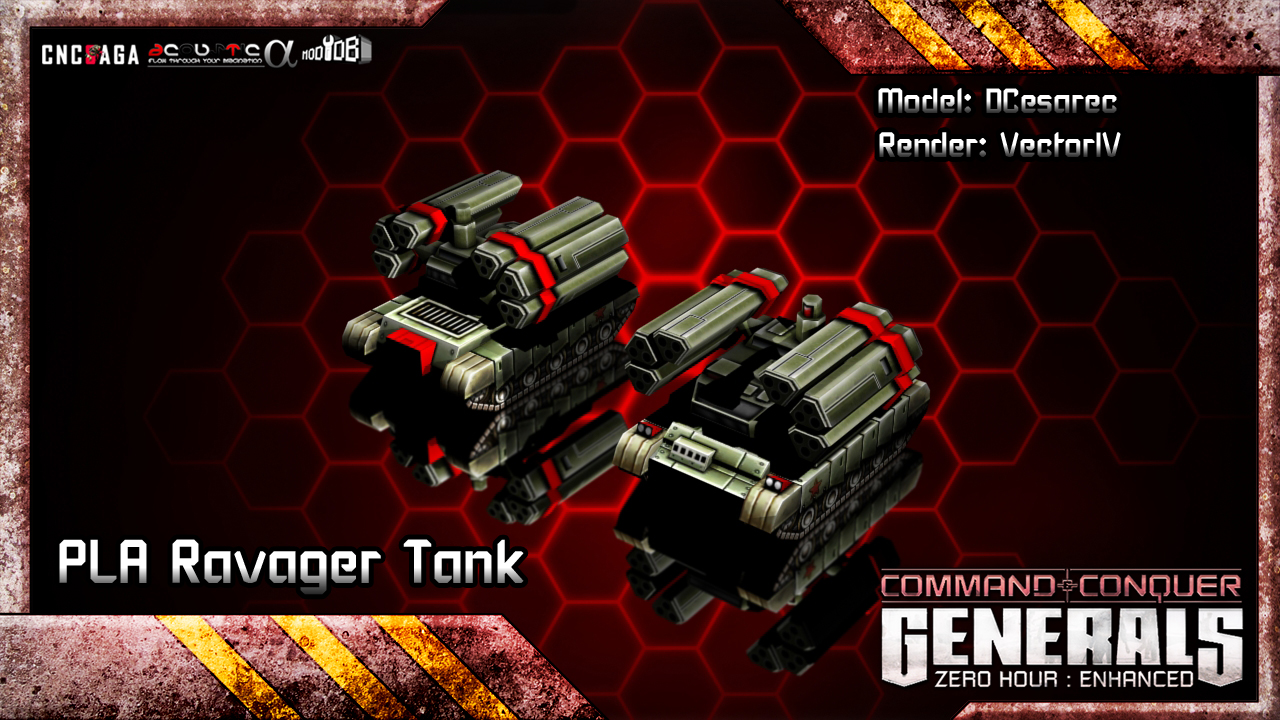 This is PLA Ravager Tank. Basically, this tank is a mobile missiles launcher based on Battle Master's chassis. This gives it a maneuver speed and medium protection against minor attacks, increasing its battlefield survival rate. Also, this gives it the speed to mobile and fire at enemies, providing it with attack and move combat style, suits with the mobile force of tanks like General Kwai's. 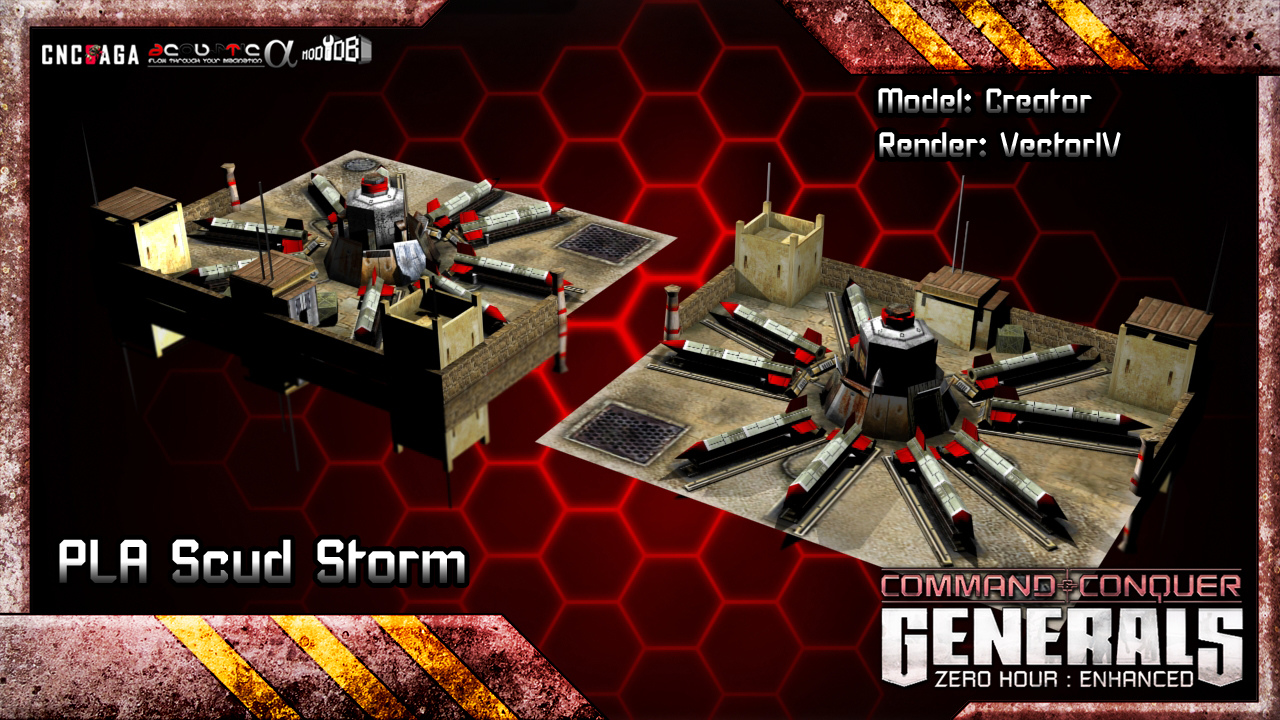 This is PLA Scud Storm. Like GLA's, it shares the same features and abilities, only its architecture that has been altered to suits Chinese art. 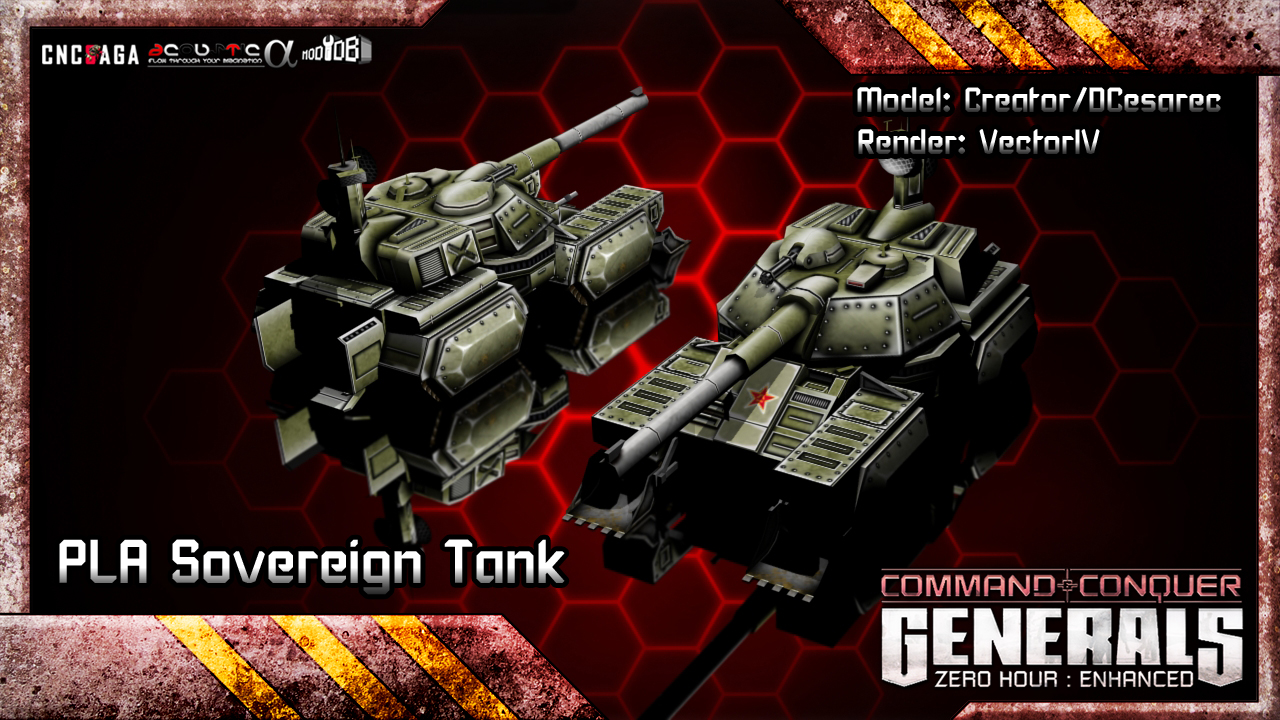 And, the last but not least. PLA Sovereign Tank. This is according to the concept art of the enormous experimental tank used by PLA elite divisions. More details shall be revealed later.

Be aware that these are not entirely done yet, some are merely a completed unit. Things might change as the time flies but feel free to suggest or advice.

Thank you for reading if you actually have read the entire thing. It's very tiring to write stuff D:
In the end, I would like to thanks Creator big time for making these awesome models and stay tune for more updates in the future and see you later.

your renders are a bit dark other than that I really like the reinforced gatling turret!

Alright, I'll put some more omni-lights the next time :D

google "3ds max 3 point lighting"
the most default light setup used everywhere on the world from photography to rendering.

Awesome stuff you got here :3

A lot thanks to Creator and DCesarec :)

I haven't done it alone. They did most of the work.

I thought this was a RotR update and then I noticed the mod's logo...

Same. Looks really alike :P I guess it's because of the fame RotR's has.

Thumb's up for the 3D modelers.

I'm curious. What does Contra get out of this "deal"?